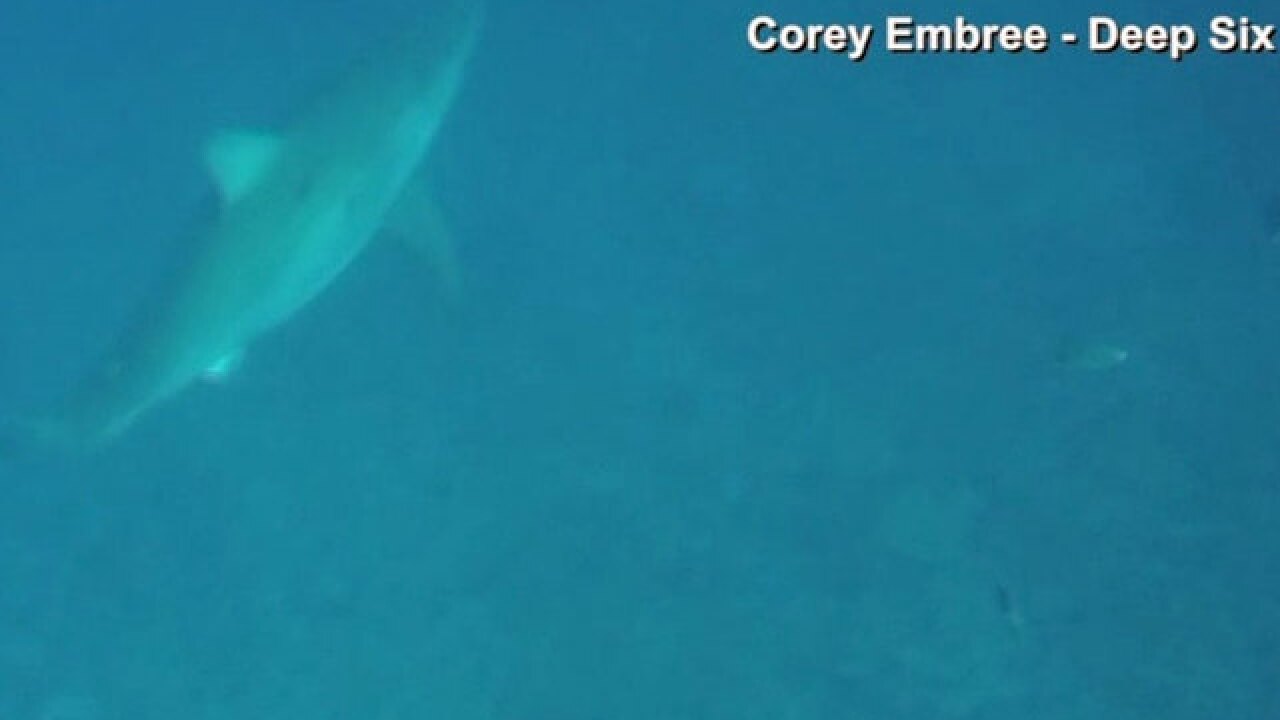 Three great white sharks have been spotted off the Florida coast in the past two weeks, including one near Juno Beach on Sunday.

Two others were spotted further north at Port Canaveral.

Shark experts say there's an uptick in sightings across the state. More than a dozen confirmed sightings have been reported in Florida in just the past month.

"It was surreal," said Joanne Fraser of Calypso Dive Charters. "It circled us very, very slowly. It was almost like it was in slow motion."

Fraser was one of several people on a scuba dive Sunday morning about 3.5 miles off the coast of Juno Beach.

"I look over to the east and I see this huge shark," said Fraser. "To actually see one with your own eyes... it's incredible."

The shark was estimated to be about 12 to 14-feet long and four feet wide.

"I've been around a lot of sharks but it made them all look so small," said Fraser. "When we jumped in there were a lot of sharks that we could see straight away, but obviously the great white scared them away."

Great white sharks can thrive in both warm and cold water and typically travel south in the winter months, but encounters are rare in Florida. The sharks tend to follow a movement pattern depending on water temperature change or food source.

"Our tagging studies show them from the Gulf of Mexico all the way to Newfoundland, Canada so they have a wide range of habitats they can live in," said John Chisholm, a nationally known researcher of great white sharks and marine biologist for the state of Massachusetts. "We do see a majority of sharks move south in the winter, some will stay longer in the north."

The divers who saw the shark near Juno Beach turned over all video and pictures to Chisholm, who is determining whether or not the shark is registered in their database. He said the shark, which is a female, has not been tagged yet.

"I have over 220 sharks in our white shark catalog. So what I'm working on now is I'm using the markings on the shark's body to help me determine whether it's one in our catalog. I haven't found a match yet," he said.

Diver Ryan Walton of Deep Obsession Charters and a team of other shark enthusiasts spent Monday searching for the great white spotted over the weekend.

"We did not have any luck finding her," he said. "These sharks move their entire lives so we knew there was a chance."

But the team did see several other species of sharks in the water and took the time to remove fishing hooks caught in the mouths of some of the animals.

"Today, one of crew members was able to get a hook out of a lemon shark's mouth. While we didn't see the great white shark today, we had a very productive day cleaning up our sharks," said Walton.

Those relaxing on Juno Beach on Monday were pretty stunned to hear the news.

"It could eat me pretty easily," said Delaney Lankton, who was visiting Juno Beach from Rhode Island.

Her mother, Jillian, is more used to hearing about them up north but says her family has no fears.

"I'm not really that concerned right now. We're leaving tonight so if it makes its way in, we'll be gone!" she joked.

"I think it's cool," said Ryan Gagnon of Wellington. "I want to go see it myself."

Other beachgoers know great whites usually want nothing to do with humans.

Fraser does have some advice for beach visitors regarding any type of shark.

"You need to be smart when you're at the beach. You don't want to be entering the water near where somebody's fishing or near a pier where they could be throwing chunks of bait. There could be sharks attracted to the area."

If the shark is not registered in the national catalog, Fraser will be able to name the shark. She plans to name her "JoJo".

Chisholm said he is still trying to compile a list of sightings for his research on the great white shark. If you think you have seen one and have pictures or video, please email him by clicking here.