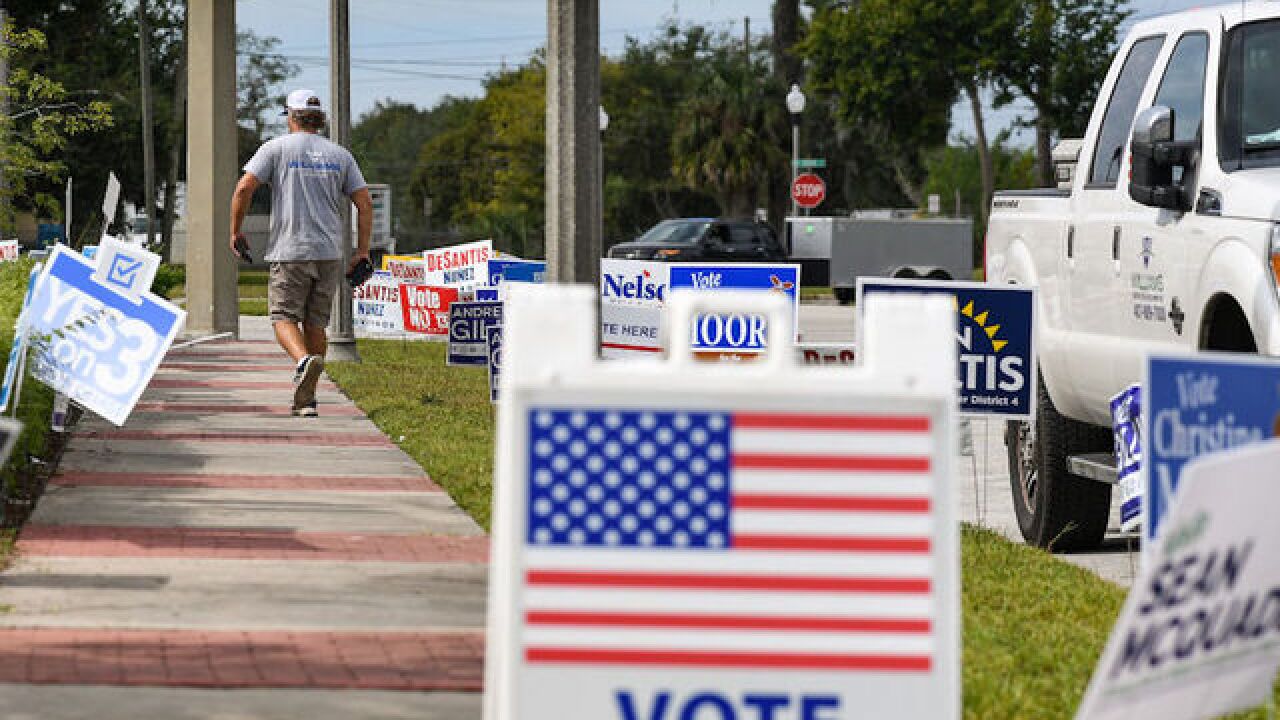 Image copyright 2018 Getty Images. All rights reserved. This material may not be published, broadcast, rewritten, or redistributed.
JEFF MITCHELL
<p> A voter walks past placards on his way to a polling station on South Central Avenue on November 6, 2018 in Apopka, Florida. </p>

The counting is over. Now, the recounting begins.

More than three days after the polls closed in Florida, the secretary of state announced on Saturday afternoon that the razor-thin races for governor, senator and agriculture commissioner will be reviewed in a series of recounts.

According to unofficial results filed by the counties, Republican Gov. Rick Scott leads incumbent Democratic Sen. Bill Nelson by more than 12,500 votes, or about .15%. The spread in the governor's race is larger, with Republican former Rep. Ron DeSantis ahead of Democratic Tallahassee Mayor Andrew Gillum by nearly 34,000 votes, for a lead of .41%. In the narrowest contest, Democratic agriculture commissioner Nikki Fried's advantage stands at 5,326 votes — just .06% — over Republican Matt Caldwell.

With the margins in all three contests at under .5%, the votes will now be recounted by machine. That process must be finished by Thursday at 3 pm ET. Races within .25% will then go to a hand recount of overvotes and undervotes. An overvote means a voter selected more than the allotted options on the ballot; an undervote means a vote selected fewer than the available choices or, in these races, none. The Senate race and the contest for agriculture commissioner both currently both fall within .25%.

The Senate race and the contest for agriculture commissioner both currently both fall within .25%.

In a statement after the unofficial count was made public, Scott's campaign called on Nelson to opt out of a recount, which is his option under state law.

"It's time for Senator Nelson to accept reality and spare the state of the Florida the time, expense and discord of a recount," said Scott spokesman Chris Hartline.

While the politicians tweeted and activists kicked off new protests this weekend, demonstrators on the streets outside the Broward County Supervisor of Elections office on Friday targeted Snipes, chanting "lock her up" and "fake votes don't count" as she and others worked inside trying to finish the initial vote count. "Make America Great Again" and "Trump 2020" signs and hats were also visible as a group carrying signs supporting Scott and DeSantis were met by another backing the Democrats, as nose-to-nose screaming matches nearly escalated into physical altercations.

Scott escalated already rising tensions across the state on Thursday night, when in a news conference he took a page from President Donald Trump and, without citing any evidence, accused "left-wing activists in Broward County" of trying to steal the election for Nelson. The county, in deep-blue portion of South Florida, is notoriously slow in counting its votes and as its tally mounted, Scott's lead had predictably diminished. In a series of tweets on Friday, Trump picked up the thread and accused the Democrats of attempting "Election Theft in Broward and Palm Beach Counties."

But Scott's request for an investigation into election-related fraud did not go far. On Friday, the Florida Department of Law Enforcement said it was told by the Department of State, which is run by a Republican Scott-appointee, that they had received "no allegation of criminal activity." Still, Scott's campaign issued an ominous-sounding statement on Saturday morning "encouraging every Florida Sheriff to watch for any violations and take appropriate action."

Meanwhile, Nelson's campaign filed suit against the state over its process for validating vote-by-mail ballots.

Democratic lawyer Marc Elias, who is running the Nelson recount effort, argued that Florida's signature matching process put an undue onus on the "untrained opinions" of poll workers, which led to a "complete lack of uniformity" in how the ballots were being judged.

"This serves as an outright disenfranchisement and burden on the right to vote," Elias told reporters on a call Friday.

South Carolina Sen. Lindsey Graham has also injected himself into the fight, alleging on Thursday and Friday -- like Scott and the President, with no proof -- that there are "shenanigans going on in Broward and Palm Beach" before suggesting that a sinister cabal of liberals from Washington was at work trying to rig the election. In fact, out-of-state lawyers from both parties, including a handful who had significant roles 18 years ago, have been flocking to Florida ahead of the recount.

"Rick has a good team of lawyers," Graham said. "Lawyers are not going to decide this race, the voters will. I support every valid vote being counted. But I also support the rule of law when it comes to voting."

Around the state on Friday, allegations and rumors of misplaced or lost votes fueled simmering anger and confusion as the campaigns, lawyers, operatives and freelance rabble-rousers girded themselves for a re-run of the pitched partisan combat that took over the state during the 2000 presidential recount.

Outside a mail distribution center in Miami-Dade County, a group of activists with images they said showed undelivered ballots inside tried and failed to get a meeting with a supervisor. Later in the day, a spokeswoman for the U.S. Postal Service said it was "researching the matter to verify that all ballots have been handled in accordance to USPS service standards."

Detailed updates on the state of the race had been hard to come by ahead of Sunday's noon reporting deadline, leading Scott to successfully sue top election officials in Broward and Palm Beach Counties for information on the total votes cast and how many of them had been canvassed.

In Broward, Supervisor of Elections Brenda Snipes turned over information to Scott and his team for review late Friday. But before midnight, the campaign pushed out a new press release claiming Snipes had not fully complied with the court order "because she refuses to confirm whether or not additional ballots exist that must be counted."

Adding to Broward County's troubles, a CNN analysis of votes cast there suggests that ballot design could be responsible for a substantial difference in the number of votes cast between the race for governor and the race for senator in Florida.