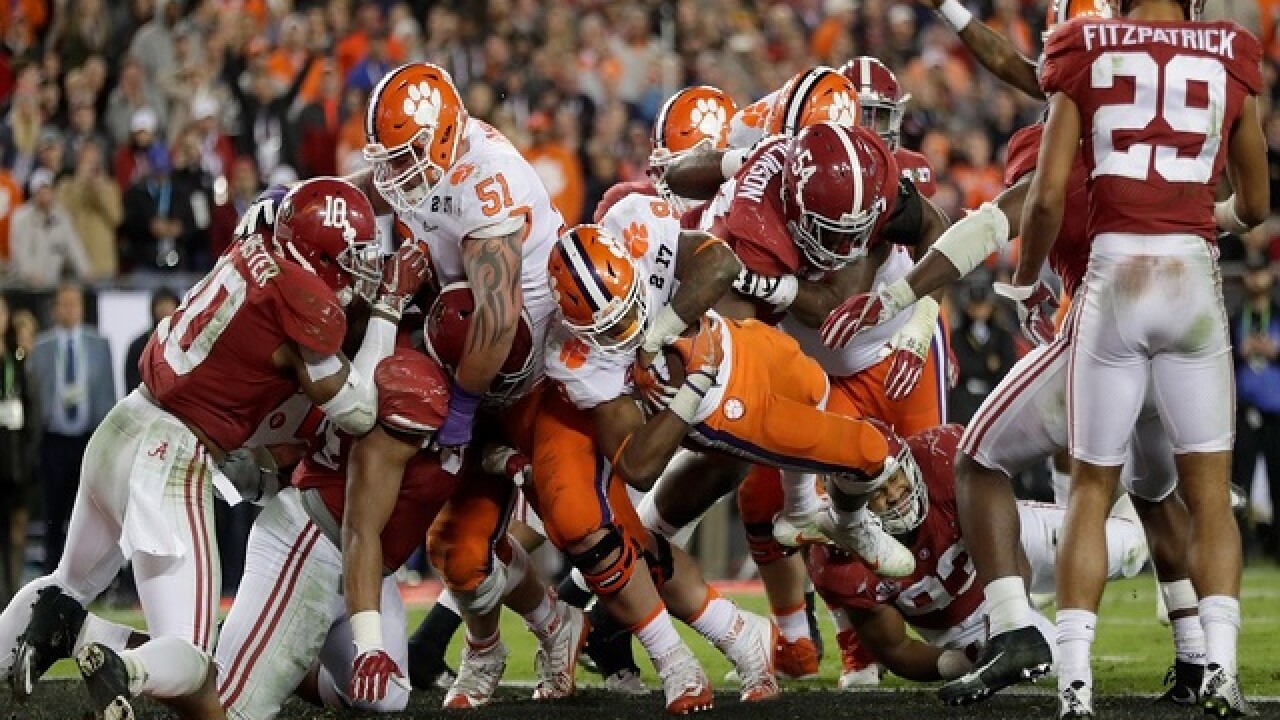 Copyright 2017 Scripps Media, Inc. All rights reserved. This material may not be published, broadcast, rewritten, or redistributed.
Jamie Squire
<p>TAMPA, FL - JANUARY 09: Running back Wayne Gallman #9 of the Clemson Tigers rushes for a 1-yard touchdown during the fourth quarter against the Alabama Crimson Tide in the 2017 College Football Playoff National Championship Game at Raymond James Stadium on January 9, 2017 in Tampa, Florida. (Photo by Jamie Squire/Getty Images)</p>

(CNN) -- In the end, the sequel was better than the original.
And this time, it was a happy ending for Clemson.
The Crimson Tide couldn't hold off two-time Heisman finalist Deshaun Watson, and the second-ranked Tigers upset No. 1 Alabama in a College Football Playoff title game rematch 35-31 early Tuesday at Raymond James Stadium in Tampa, Florida.
It's Clemson's first national title since the 1981 season and the first time it has beaten a top-ranked team.

With one second remaining, Watson found sophomore wide receiver Hunter Renfrow for the game-winning score, a 2-yard touchdown pass. It capped a fourth quarter in which the Tigers scored 21 points.
In last year's title game, which Alabama won 45-40, Watson gave the Crimson Tide trouble, completing 30 of 47 passes for 405 yards and four touchdowns while rushing for 73 yards.
On Monday night, the Clemson junior quarterback got off to a slow start but heated up as the game went along, finishing with 36-of-56 passing for 420 yards and three touchdowns and for 43 yards rushing with one score.
Watson, who graduated in December and possibly played his final game for Clemson (14-1), was named the game's MVP. Renfrow had 10 receptions for 92 yards and two touchdowns.
Alabama (14-1), which had the chance to go wire-to-wire as No. 1, lost its first game since September 19, 2015, ending a 26-game win streak.
"I don't think one game defines who you are, you know, as a person, as a competitor, or as a team and certainly not define what this group of young men was able to accomplish this year," Alabama head coach Nick Saban said. "It was a hard-fought game out there today, very disappointing to lose a game like that, and I wish there was something else that I could do for the players to help them be more successful in the game."
The loss kept Saban from winning a sixth title, which would have tied him with another Alabama legend: Bear Bryant.
A dramatic comeback
It didn't start well for the Tigers.
Alabama sophomore running back Bo Scarbrough, who rushed for 180 yards and two touchdowns in the Peach Bowl semifinal, continued his dominance in Tampa before leaving with an injury, running for 93 yards and two first-half touchdowns. That gave the Crimson Tide at 14-0 lead.
A 24-yard pass from Watson to Renfrow cut the score to 17-14 with 7:10 left in the third quarter. But then Jalen Hurts, who had been quiet for much of this game, stepped up. The freshman connected with senior tight end O.J. Howard for a 68-yard touchdown to give Alabama a 24-14 lead.
Hurts passed for 131 yards with a touchdown, going 13-of-31.
Then came a frentic fourth quarter. With 4:38 remaininng, Clemson regained the lead at 28-24 with a 1-yard touchdown run from junior running back Wayne Gallman. Hurts counterpunched, scoring on a 30-yard run to make it 31-28 with 2:07 remaining and giving him 63 rushing yards on the night.
But there That set up the final drive from Watson. In that final quarter, he was 12-of-18 for 130 yards.
Alabama entered the night leading the country in total defense, rushing defense, scoring defense and defensive touchdowns. But it didn't look like it in the final quarter. Thanks in huge part to Watson, Clemson finished with 511 total yards of offense.
"I knew he was going to come back strong in the second half," Alabama senior defensive lineman Jonathan Allen said of Watson. "They made the adjustments they needed to and we didn't."
The-CNN-Wire
™ & © 2017 Cable News Network, Inc., a Time Warner Company. All rights reserved.
Copyright 2017 Scripps Media, Inc. All rights reserved. This material may not be published, broadcast, rewritten, or redistributed.