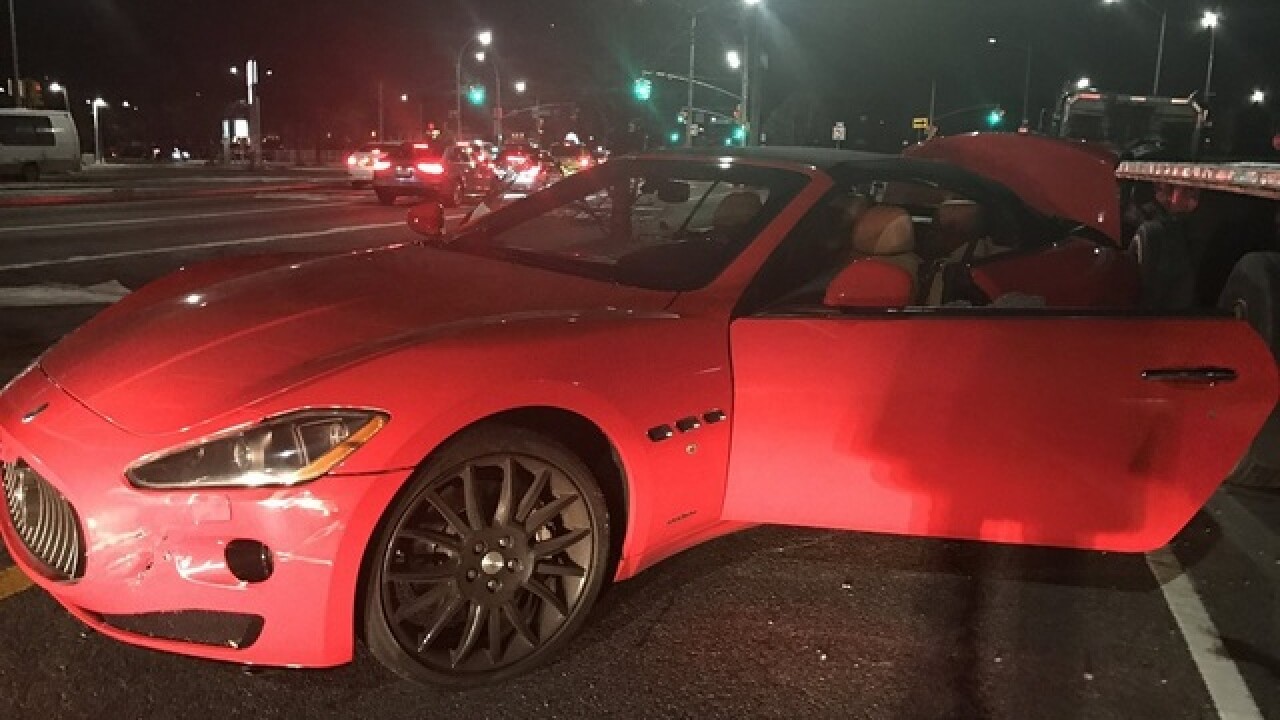 Magee Hickey
<p>Troy Ave's Maserati was left on a Brooklyn street after he was shot on Christmas Day.</p>

(CNN) -- Brooklyn rapper Troy Ave -- wounded in a fight this spring that led to a charge of attempted murder -- was shot and wounded again.
This latest incident took place on Christmas Day in Brooklyn, when a man approached the rapper while he was stopped at an intersection, authorities said.
Troy Ave, whose real name in Roland Collins, attempted to drive when the gunman shot several rounds into the rapper's red Maserati, according to one of Collins' attorneys, John Stella.
Collins was taken to Brookdale University Hospital and Medical Center in Brooklyn, where he was in stable condition after sustaining a shoulder wound and a graze wound to the head, Stella told CNN. He went into surgery late Sunday night as doctors worked to extract a bullet that passed through Collins' shoulder and became lodged in his back.
Collins' girlfriend, who was in the car's passenger's seat, was not injured.
The gunman remains unidentified and at large, according to New York Police Department Lt. John Grimpel. Collins said he could only see that the shooter wore a hoodie that hid his face, according to Stella, who spoke with Collins in the hospital.
"Thankfully, he will survive the second attempt on his life." said Scott Leemon, another attorney representing Collins.
"Tonight, Troy Ave was targeted again...on Christmas. In Brooklyn, going to meet his family for the holiday, he was shot two times," Leemon said in a statement. "As we have said from the beginning -- he is a victim. We pray for his speedy recovery."
In May, an argument that escalated
Collins was shot in May after performing at a concert venue where rapper T.I. was scheduled to perform.
That incident began as an argument that turned into a fistfight outside a room reserved for rappers at the concert at Irving Plaza, New York Police Chief of Detectives Robert Boyce said.
About five minutes after the fighting began, someone pulled a gun.
Police said Collins is the man seen on surveillance video entering a VIP area of the concert venue and firing his weapon once. The video, released by police, shows several people cowering under a bar and couples embracing before a man enters the room.
In the short video, the gunman raises his hand several times and fires a shot to the opposite side of the room as debris clouds the screen and people scurry around the room, knocking over chairs.
After the incident, Collins walked to a hospital and was treated for a leg wound.
Collins was eventually arrested and released on $500,000 bond for his involvement in the shooting in which his longtime friend and bodyguard Ronald "Edgar" McPhatter was killed, Stella told CNN.
Collins pleaded not guilty to charges of attempted murder and illegal possession of a weapon. The bond package, however, has barred him from performing or leaving New York's five boroughs.
He is in the process of negotiating new bond terms, according to Stella, that if approved by the district attorney's office, will allow Troy Ave to perform on the national stage again.
As for the Christmas Day shooting, Stella said Collins was "certainly very lucky" to have survived.
"He's been performing since he was in his teens and he's never been someone with a list of enemies," Stella said.
CNN's Shimon Prokupecz, Joshua Berlinger, Emily Smith and Lorenzo Ferrigno contributed to this report
WKBW