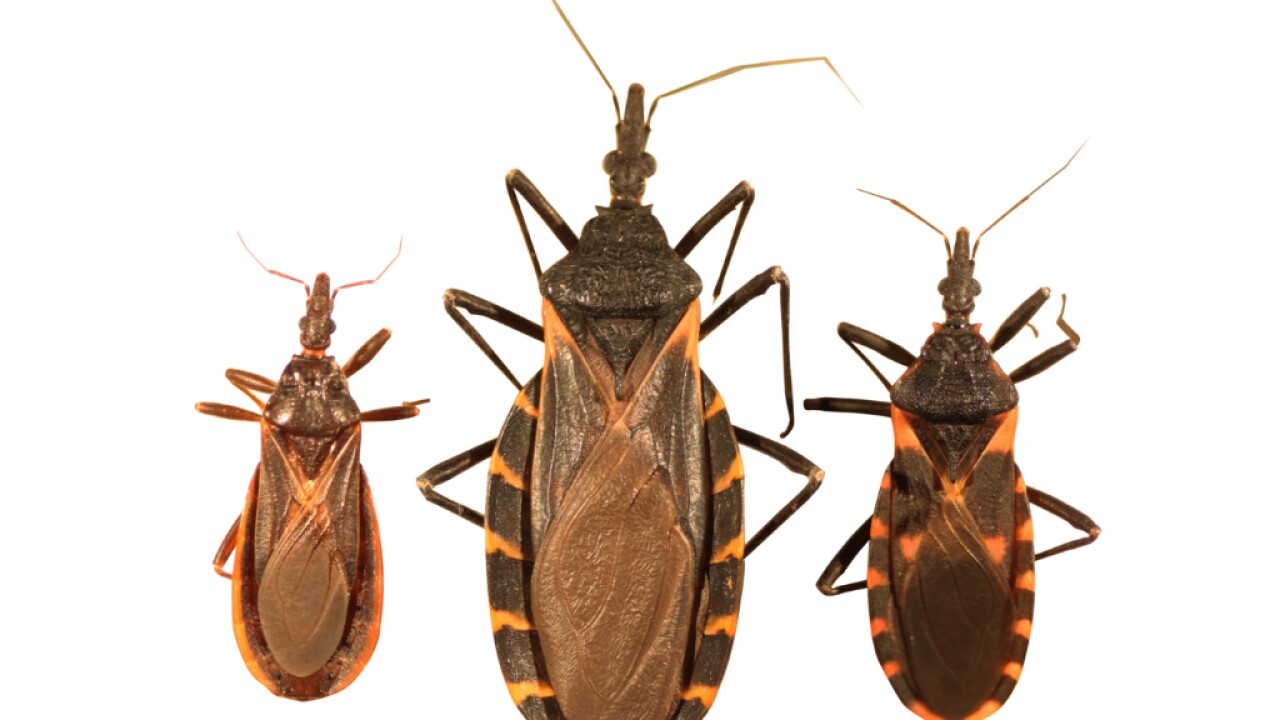 A bloodsucking insect known as Triatoma sanguisuga, or a "kissing bug," has been found in Delaware for the first time, public health officials said this week.

Triatomines, or kissing bugs, are known for feeding on animal and human blood during the night. They're sometimes referred to as kissing bugs because they like to bite humans on the face, specifically around the eyes or mouth.

According to a report from the US Centers for Disease Control and Prevention , a family in Kent County, Delaware, contacted the Delaware Division of Public Health and the Delaware Department of Agriculture in July 2018 after an unidentified insect bit a child's face while she was watching television.

"The parents were concerned about possible disease transmission from the insect," the report says.

The DDA's preliminary findings concluded it was a kissing bug that bit the child. These suspicions were confirmed by Texas A&M University’s Kissing Bug Citizen Science Program and the CDC. This is the first confirmed identification of a kissing bug in Delaware.

But why do public health officials worry about these creepy-crawlies? They sometimes carry a parasite known as Trypanosoma cruzi, or T. cruzi, which can cause Chagas disease. According to TAMU's kissing bug program, more than 50 percent of those little suckers submitted by the public from across Texas were infected with the parasite.

Chagas disease can strike humans, dogs and other mammals.

"In humans, Chagas disease manifests in two phases: acute phase and chronic phase," according to TAMU . "After becoming infected with the parasite, the acute phase can last for a few weeks or months. This phase can be symptom-free or difficult to diagnose because the symptoms are common for many types of sicknesses, including fever, fatigue, body aches, headache, rash, loss of appetite, diarrhea and vomiting."

It's important to note that not all kissing bugs carry the parasite that causes Chagas, and among those who do get infected with the parasite, only about 30 percent develop the chronic version of the disease.

"Chronic Chagas disease includes cardiac complications and/or intestinal complications, and these signs may not be apparent until decades after the initial infection," TAMU's kissing bug website states. "Cardiac signs include enlarged heart, heart failure, altered heart rate, and/or cardiac arrest. Intestinal signs include an enlarged esophagus or colon, which can cause difficulties with digestion."

And what about Fido?

"In dogs, infection with the Chagas parasite can cause severe heart disease, however many infected dogs may remain asymptomatic," TAMU says. "There is variation in the degree of complications that likely relate to the age of the dog, the activity level of the dog, and the genetic strain of the parasite. Cardiac rhythm abnormalities and sudden death may occur, as well as ascites due to reduced cardiac function and inability to properly pump fluids throughout the body."

Interactive Map: Explore the locations and seasonality of kissing bugs

But don't worry — while the bugs are found in the U.S., there haven't been many cases of people contracting Chagas from the bug stateside. Chagas disease is more commonly seen in Central and South America.

The particular kissing bug that bit the child in Delaware was tested and did not have the Chagas-causing parasite, and the girl who was bitten had no ill effects as a result of the bite.

If you are feeling a bit of trepidation, here are some things you can do to protect yourself and your pets from the little blood suckers, according to the CDC and TAMU: