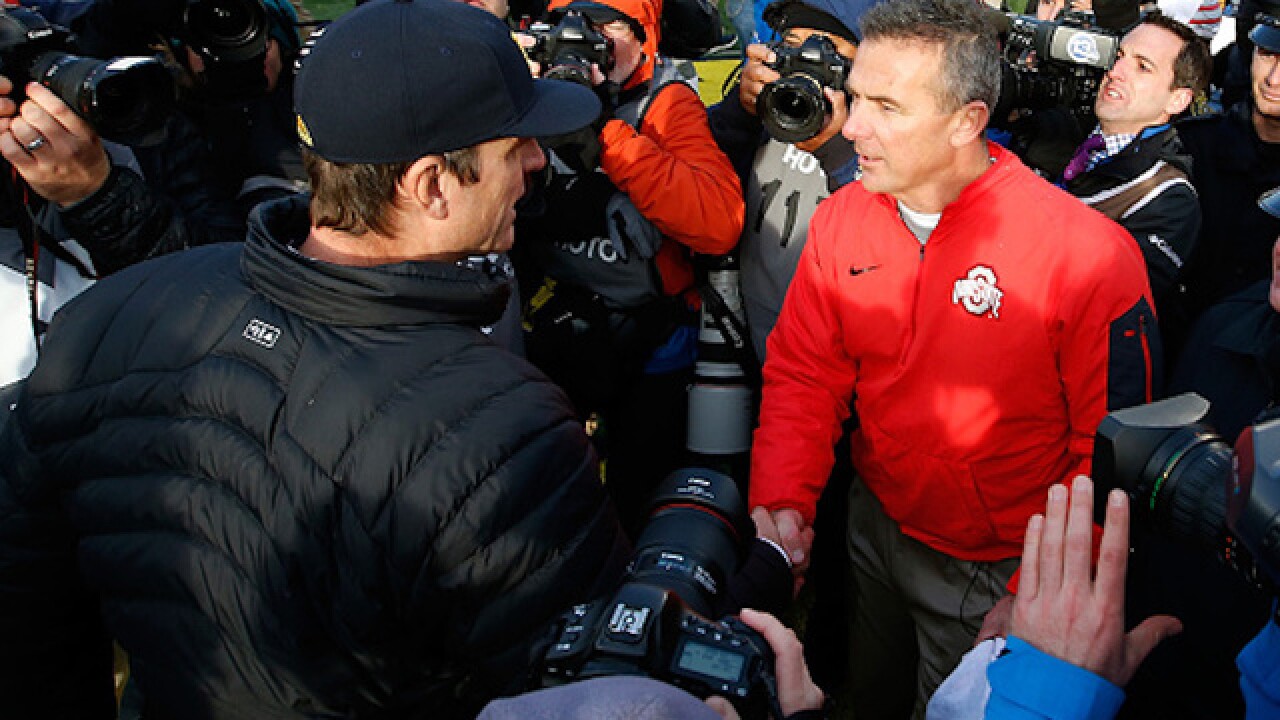 Saturday marks one of the biggest regular season college football games in several years. No. 2-ranked Ohio State is set to host No. 3-ranked Michigan in what is known in the Midwest as "The Game."

ESPN declared the game as the biggest rivalry in American sports, ahead of Yankees/Red Sox, Duke/North Carolina and Ali/Frazier. Saturday marks the 113th meeting between the two squads. Michigan leads the all-time series 58-47-6.

The game has been played every year since 1918, and has been the final scheduled game of the season for both teams since 1935.

This Saturday's game could decide who wins the Big Ten East Division and possibly a spot in the College Football Playoff.

Here are 5 defining moments in the illustrious history between two of college football's biggest programs.

Harley's popularity took Ohio State from an average program to one of national prominence. Within several years, Ohio State opened Ohio Stadium which was one of the largest stadiums of its era. The stadium is commonly referred to as the "House that Chic Built."

The 1950 game was played during the Great Appalachian Storm of 1950 when Ohio dealt with one of the worst blizzards in the state's history. The storm was blamed for hundreds of deaths, as parts of Ohio saw more than 2 feet of snow.

At Ohio Stadium, 50,503 showed up to see one of the sloppiest football games in history. The game-winning score came late in the second quarter when Ohio State punter Vic Janowicz had his kick blocked and recovered in the end zone by Michigan's Tony Momsen for the game's lone touchdown.

The game was notable for having a combined 45 punts, many of which came on third down.

Ohio State came into the 1969 game on a 22-game winning streak, and was largely considered one of the greatest college football teams ever put together. Ohio State also had won seven of its previous nine matchups versus Michigan.

But Michigan was led by a former Buckeye assistant Bo Schembechler. Despite being heavy underdogs against the No. 1 Buckeyes, No. 12 Michigan pulled off the stunning 24-12 upset in Michigan Stadium.

The win helped Michigan to just its second Rose Bowl game in 19 years, and ushered in a new, competitive era in Michigan football. The game also helped decide the winner of the Big Ten for the next 11 years.

Ohio State or Michigan represented the Big Ten every year in the Rose Bowl Game from 1969 through 1981.

Ohio State and Michigan entered the 1973 game unbeaten and playing for a Big Ten title. Thanks to a rule change by the Big Ten in 1971, Ohio State could return to the Rose Bowl with a win.

But after 60 minutes of play, the game finished with a 10-all tie. The tie meant that Big Ten athletic directors would vote to decide on who would represent the conference in the Rose Bowl.

Despite the expectations that Michigan would be voted to be the conference's representative, the league's athletic directors selected Ohio State to return to the Rose Bowl. It was the first time a Big Ten team made consecutive appearances in the Rose Bowl.

The controversy led to a number of changes. Most notably, the Big Ten allowed teams to participate in other bowl games. In 1975, Michigan became the first team to accept an invitation to another bowl game.

For the first time in the storied history of the rivalry, the two squads met as the top two teams in the nation. No. 1 Ohio State hosted No. 2 Michigan with both a Big Ten title and spot in the National Championship Game on the line.

Adding to the emotions of the game, Schembechler died the day before the game.

Ohio State won the game in a 42-39 slugfest, sending Ohio State to its second National Championship Game in five years.

Since the 2006 game, Michigan has struggled against the Buckeyes. Michigan's only win in the last decade came in 2011.