Aleppo children evacuated after being trapped in orphanage 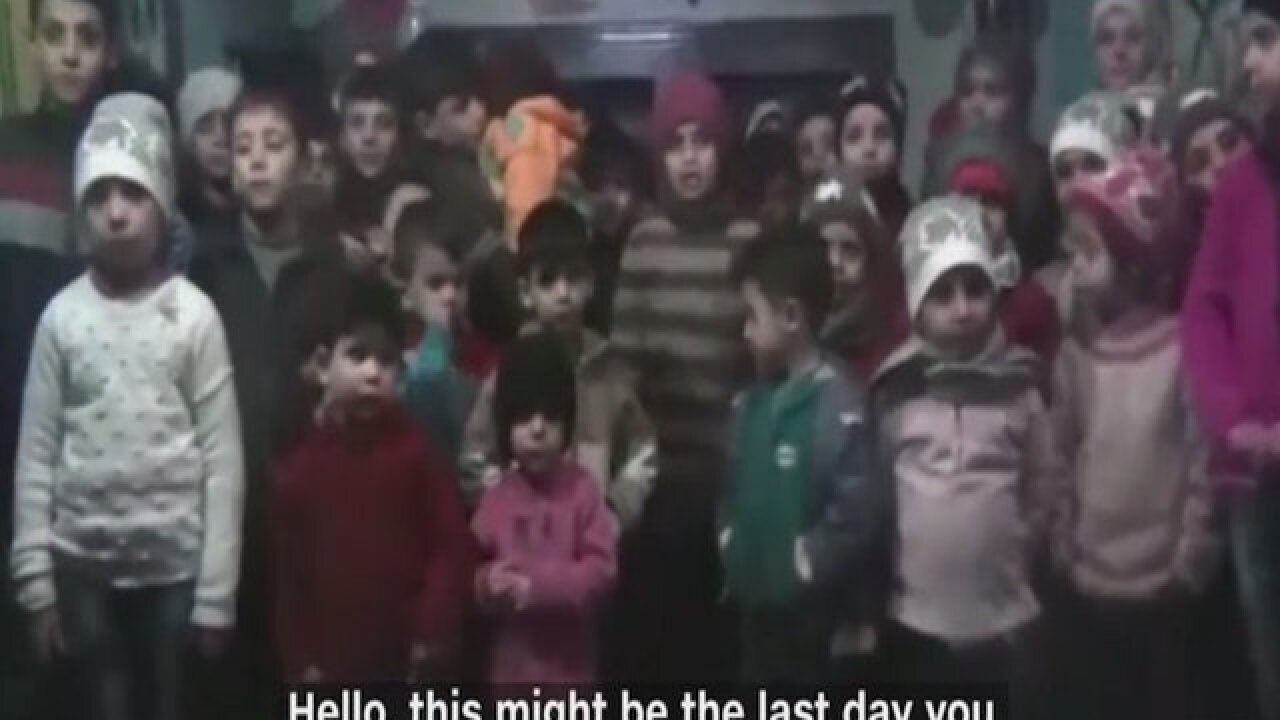 CNN
Syrian American Medical Society
<p>&quot;This might be the last day you will hear my voice and see me,&quot; says 10-year-old Yasmeen Qanouz, one of dozens of orphaned children still trapped in eastern Aleppo.The video, recorded by orphanage director Asmar Halabi and released by the Syrian American Medical Society, shows the children huddled together in winter hats, the youngest appearing to be a toddler.</p>

(CNN) -- Desperate efforts to evacuate thousands of civilians and rebels trapped in Aleppo have resumed after two buses due to carry people to safety were set ablaze Sunday.

At least 4,500 people have left eastern Aleppo since the early hours of Monday morning local time, according to Turkish foreign minister Mevlut Cavusoglu.

He also confirmed that 12,000 civilians have been evacuated in total from the eastern part of the city.

Also on Monday, UNICEF Regional Director Geert Cappelaere confirmed that 47 children who had been trapped in an orphanage in east Aleppo had been evacuated, "with some in critical condition from injuries and dehydration."

"The evacuation of these orphans, along with thousands of other children from east Aleppo in the past days, is a glimmer of hope amid a grim reality for the children of Syria," he said in a statement.

"Their safe departure is a testimony to the relentless efforts of humanitarians on the ground, working around the clock for children and their families."

At least 65 buses full of evacuees have left eastern Aleppo since the early hours of Monday More than 4,500 people have been evacuated, according to Turkish foreign minister UN Security Council set to vote on Monday on resolution to monitor evacuations Turkish and Russian foreign ministers to meet Tuesday

Evacuees 'have been through hell'

Conditions on the buses are terrible, according to Abdul Kafi Alhamdo, an English teacher in Syria. "We had to stay four people in a seat," he told CNN via text message.

He said children were vomiting due to lack of food and water, and people on the bus were unable to go to the bathroom or take the medicines they needed. Aid workers had advised the group stay silent "to save your lives."

"Save their souls as soon as possible," stressed Abdul Kafi Alhamdo.

Among those evacuated was Bana Alabed, the seven-year-old who captured the world's attention with her heartbreaking tweets from Aleppo.

Casey Harrity, Director of Programs at Mercy Corps, which is working with refugees being evacuated out of eastern Aleppo, says the people they are welcoming "have been through hell."

"The level of trauma they have experienced is impossible to describe or comprehend," she said. "We are working very hard to ensure they are received with as much dignity and support as possible."

The evacuation process restarted ahead of a UN Security Council vote due Monday on a draft resolution which would allow the UN to monitor the process.

US Ambassador to the UN Samantha Power said that with "so many Russian vetoes up to this point" it was hard to have total confidence in Monday's vote but she predicted it would unanimously pass.

"Hopeful operation will proceed smoothly," Robert Mardini, of the International Committee of the Red Cross, said on Twitter.

Meanwhile, an official from the Turkish foreign ministry confirmed to CNN that a meeting will take place Tuesday between foreign minister Cavusoglu and his counterparts from Russian and Iran.

"Our minister is heading to Moscow to talk about Aleppo and Syria," said the official.

"This trilateral meeting was planned for 27th but they decided to do it earlier on the 20th.

"While he is visiting Moscow our minister will have a bilateral meeting with Sergey Lavrov about Turkish-Russian relations as well."

An evacuation agreement, struck Saturday, was to give safe passage to those loyal to Syrian President Bashar al-Assad's regime, including Iranian militia groups, from areas held or besieged by rebels, the Aleppo Media Center activist group said.

It was a new demand in exchange for the evacuation of civilians, rebels and others loyal to the opposition from eastern Aleppo, now almost entirely in government control.

What began as a straightforward evacuation agreement has become a complicated, three-stage deal involving Aleppo and four other cities. Some 4,000 people were to be evacuated from Kefraya and Foua, while others were also to come from Madaya and Zabadani.

Then, on Sunday, buses in neighboring province of Idlib were set ablaze as they made their way to Kefraya and Foua, said Syrian state media and the Syrian Observatory for Human Rights, a UK-based monitoring group.

The delay left thousands of people in limbo. Many had been sleeping on the streets and in bombed-out buildings in subfreezing temperatures since Friday, when earlier evacuations were interrupted. Activist Monther Etaky in eastern Aleppo posted a video on Twitter showing dozens of weary and injured people, saying they had been waiting to be evacuated since 6 a.m. "Civilians are not negotiations tool(s)," he wrote in his post.

Some resistance to the deal was expected. It requires the cooperation of opposing parties in the Syrian civil war that has raged for more than five years.

Vote on resolution scheduled for Monday

The UN Security Council is scheduled to meet Monday to vote on a proposal brought by France that would redeploy UN staff to Aleppo to monitor and report on the evacuation of civilians.

The proposal calls for safe evacuations, "immediate and unconditional" access to humanitarian aid, and protection of medical facilities and personnel.

Russia, which has supported Assad with airstrikes since September 2015, has used its veto power as a permanent member of the Security Council six times to shoot down UN resolutions on the conflict, while China has vetoed five of those six.

US Ambassador to the UN Samantha Power said they had worked "very constructively together with the representative of the Russian Federation on the text" so the expectation was for the vote to be "unanimous."

Turkish President Recep Tayyip Erdogan spoke by phone with Russian President Vladimir Putin about the latest developments in Aleppo, according to Turkey's official news agency Anadolu. The two said issues around evacuations should be solved as soon as possible.

They also discussed efforts to send humanitarian aid into Aleppo and to reach a political solution in the country. No specific details were released.

The Security Council has come under criticism for failing to find a political solution to Syria's brutal war that has killed at least 400,000 people and to even agree on days-long ceasefires.

Winter will be 'a killer'

The Norwegian Refugee Council is assisting people who have fled eastern Aleppo, many of whom slept outdoors as temperatures plunged below zero. The council is hosting them in camps to the north of the city.

"Our major concern at this point is -- not only in Aleppo but across the country, where there are people being displaced by this fighting -- is that they're living in the open, they're exposed to the elements," Thomas White, the organization's Syria Response Director, told CNN's Cyril Vanier. "And it's cold right now, and this winter in northern Syria will be a killer."

For those staying, life is only getting more grim. The government's grip on eastern Aleppo is now so tight there is little left for civilians.

The Syrian regime was accused of continuing its destructive airstrikes this week in violation of earlier ceasefires.

A harrowing video broadcast by ITV's Channel 4 of what is believed to be eastern Aleppo's last hospital shows a child siting on a bed, covered in dust and blood, visibly traumatized, following an airstrike.

A woman, also bloodied and white with dust, wails in pain, saying she lost all her children in a strike in their home as they slept.