Airstrikes in Syria's Aleppo and shelling in south kill 20 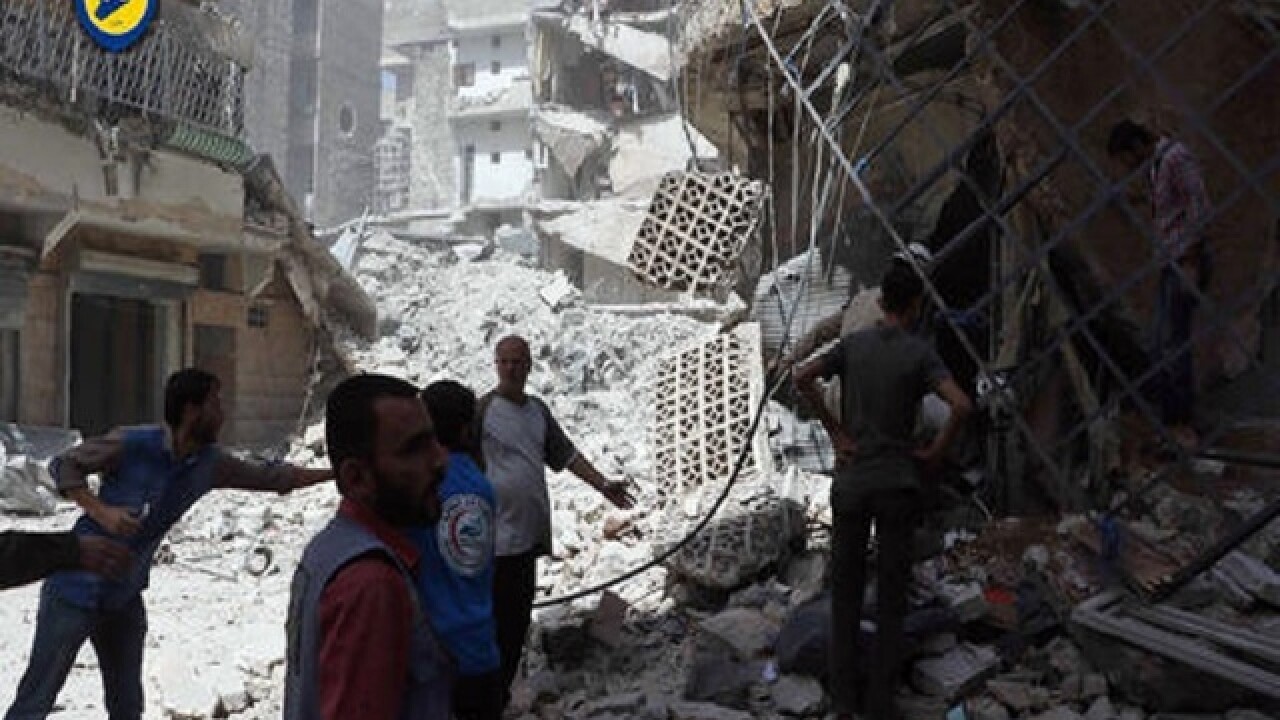 By: Associated Press
Posted at 8:58 PM, Oct 11, 2016
BEIRUT (AP) — Airstrikes on rebel-held parts of the northern city of Aleppo killed at least 14 people Tuesday, while the shelling of a government-held neighborhood in southern Syria hit a school, killing at least six, including children, opposition activists and state media said.
Syria's official news agency SANA also reported rare shelling of neighborhoods in the capital, Damascus, including several mortar shells fired by opposition groups based on the edge of the city that landed in the residential Qasaa district and close to the Umayyad Mosque, wounding an unspecified number of people.
Fighting on a number of fronts across the country has intensified in recent weeks following the collapse of a U.S. and Russian-brokered cease-fire.
The northern city of Aleppo, Syria's largest and its former commercial center, has seen particularly fierce fighting, as pro-government forces try to capture neighborhoods in besieged opposition-held parts of the city.
The activist-operated Aleppo Today TV station and Qasioun news agency say bunker-busting bombs were used in an attack on the Bustan al-Qasr neighborhood in rebel-held eastern Aleppo.
Other activist groups and a member of the Aleppo local council, Zakaria Amino, said rescue workers were searching for people under the rubble. Amino said bombs fell on a number of other rebel-held neighborhoods.
The opposition-held part of Aleppo has been battered by an intensive aerial campaign since last month, when the truce collapsed after just a week. Syrian pro-government forces are also conducting a ground offensive into the rebel-held districts, advancing slowly in the north, east and south of the city.
The Britain-based Syrian Observatory for Human Rights said the airstrikes on Aleppo killed at least 16 people, while the Local Coordination Committees said 14 were killed.
In the southern city of Daraa, where the conflict began following anti-government protests in March 2011, rebels fired rockets at government-held areas. One hit a primary school, killing six people — among them five children — and wounding 18 students, according to state-run news agency SANA. It said some of the wounded are in serious condition.
SANA posted a photo of a boy carried on a stretcher, his grey trousers stained with blood and his bandaged right hand on his stomach. Another photo showed a boy and a girl inside what appeared to be a hospital with IV drips in their arms.
Copyright 2016 The Associated Press. All rights reserved. This material may not be published, broadcast, rewritten or redistributed.