Why is my cable bill so high? 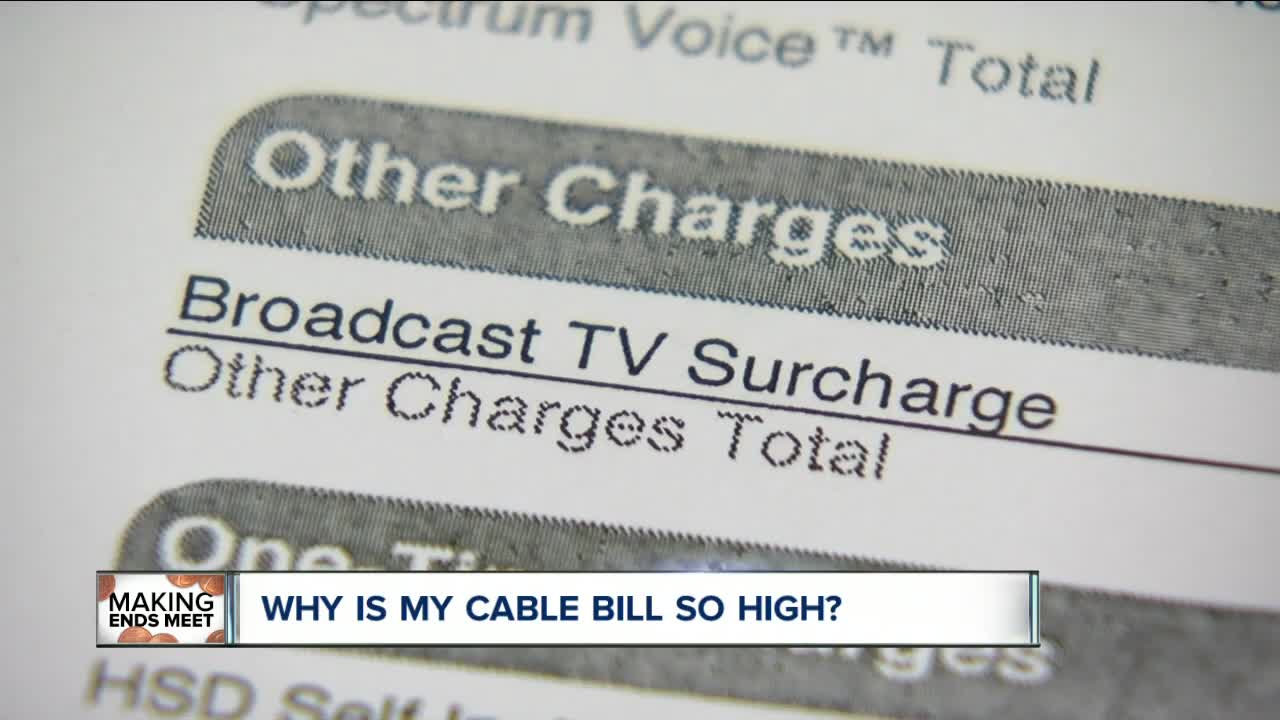 Why is my cable bill so high? Consumer Reports find "hidden fees" are costing consumers.

BUFFALO, N.Y. (WKBW) — Promotions for cable packages look great until you get the bill with the sticker shock of all the extra fees and charges.

Spectrum is one company that adds a "Broadcast TV Surcharge" to its bill in the amount $11.99.

According to Spectrum, operated by Charter Communications, the surcharge is the amount it costs to carry local broadcast channels, something the company says are continuing to go up.

"It is not a surcharge. It has never been a surcharge," said David Donovan, President of the New York State Broadcasters Association (NYSBA).

For many years, cable companies rebroadcast local TV signals without paying anything to the local channels.

That changed starting in 1992, when Congress required cable companies to negotiate, in good-faith, fees with local broadcasters for the re-transmission of their programming.

Donovan said it is that cost which Spectrum is portraying as a surcharge on customers bills, which is in fact, a negotiated programming cost - the same as is incurred with every other cable channel.

"To blame local broadcast stations, that provide local news, public affairs, and serve their community, for this rate increase, we really think is a misdirection," commented Donovan.

Spectrum is currently in a dispute with WGRZ-TV in Buffalo over how much Spectrum must pay to carry the station's signal. WGRZ's owners (Tegna) have set a deadline to a come to a deal or the station will be dropped from Spectrum.

Other local stations have had the same problems in the past with DirecTV.

"Compared to what broadcasters are charging, frankly, that is not the reason for the increase," said Donovan, who added that local stations are the "backbone" of nearly all cable packages because they are the most popular with viewers.

Consumer Reports is also weighing-in on the issue of cable's hidden fees. In a recent report, it highlighted Spectrum's (Charter Communications) "Broadcast TV Surcharge" because it increased 1250% since 2010.

According to Consumer Reports:
“ . . . Charter bumped up its Broadcast TV Surcharge three times since November 2018, from $8.85 to $9.95, to $11.99, and now to $13.50.23. The rapid escalation of Charter’s fee represents a more than 50% increase of what that fee cost a year ago—and far more than the $1 it was when first introduced in 2010. To understand the forces pushing for these increases, it is worth pausing to consider the financial impact of Charter’s three increases of its Broadcast TV Surcharge in the past year. If we multiply the additional $4.50 per month per subscriber times the company’s almost 17 million subscribers, we see that Charter is able to collect nearly an additional $918 million a year by simply deciding to increase one company-imposed fee.”

Asked for a response, Charter Communications (Spectrum) told 7 Eyewitness News:
"The TV package price changes are the first since we began introducing Spectrum TV plans in Western NY 2 ½ years ago, reflecting the higher cost of cable programming over that time. The change in the Broadcast TV Surcharge is due to the continually and rapidly increasing cost of local broadcast stations specifically."