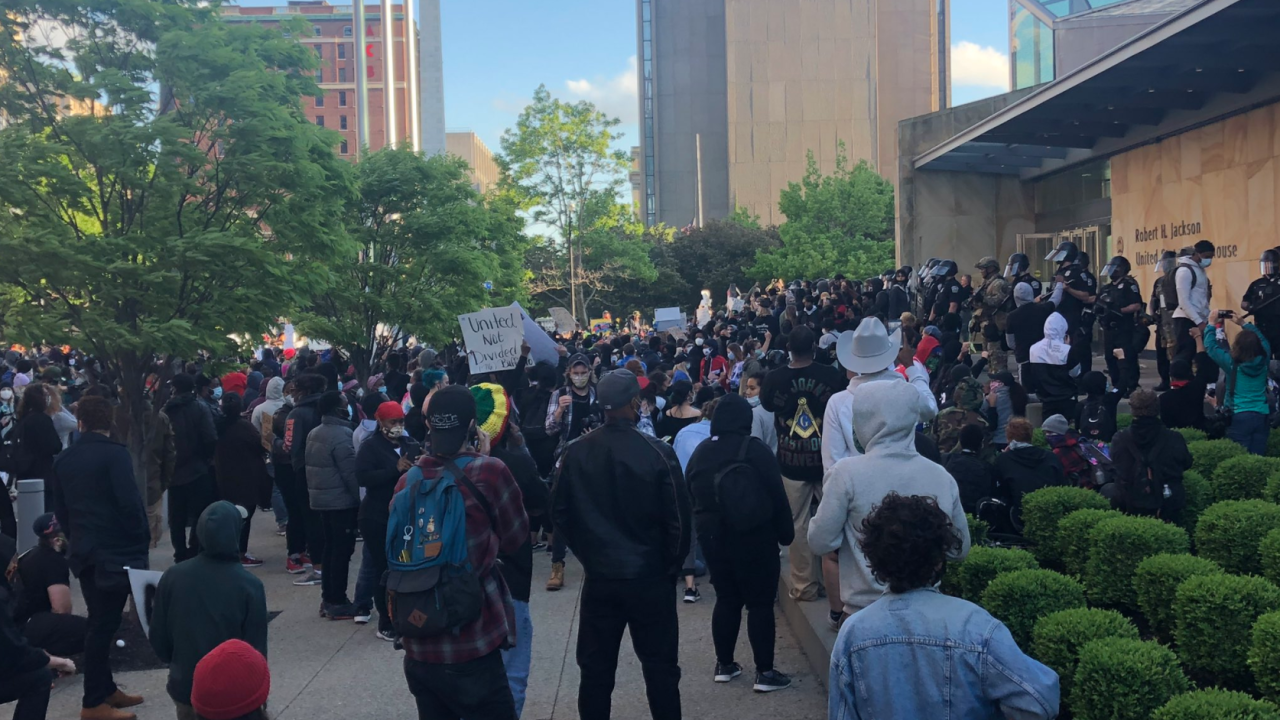 BUFFALO, N.Y. (WKBW) — On Saturday evening, Erie County Executive Mark Poloncarz announced a 10:30pm curfew for all of Erie County in effect until 7am on Sunday. This is an attempt to break-up groups of potentially violent protests in the city. A state of emergency has also been declared in Erie County.

The declaration comes after reports of looting and vandalism in Niagara Square, Niagara Street and Grant Street.

After the curfew took effect, protesters remained in Niagara Square in Downtown Buffalo.

Enforcement of curfew has begun. pic.twitter.com/lyIBgYPoy9

During that time, a van ignited in flames in the square.

A 7 Eyewitness News photojournalist captured live video of a man throwing a burning object-- possibly a laundry basket-- into Buffalo City Hall through a window.

Shortly after, the Buffalo Fire Department arrived on scene to put out a small fire inside City Hall.

Firefighters also put out two fires at a nearby parking lot shortly after the fire at City Hall.

Fire crews now have both the fires out. @wkbw pic.twitter.com/h4fp5OTFTd

Crowds began to disperse from Niagara Square after 11:30 p.m. After midnight, protesters were still being cleared from the streets in Allentown.

Police clearing the streets down Elmwood in Allentown. Not many people still out. @WKBW pic.twitter.com/siwHKZwcWt

The curfew remains in effect until 7 a.m. Sunday morning.

The following tweets represent a timeline of the protests leading up to the curfew:

So now the demonstration is moving to make a right on Jersey Street off Niagara. It looks like demonstrators have stopped attempting to engage with police, and now they’re just moving in a wide berth around where the police presence is.

Crowd stopping at Niagara and Maryland. Gathering in street. Police presence hasn’t caught up yet. Not sure whether they’re planning to follow, actually. pic.twitter.com/H5pH8Kheaw

Another person being detained. pic.twitter.com/X17PXbRH3f

Pushing back. Now a clear area on Delaware in between Niagara square and Mohawk. pic.twitter.com/gr9jwBGBfR

Demonstrators have started fighting with police.

Tear gas in the air. People are throwing things. Police are making an arrest.

7 Eyewitness News reporter Madison Carter is at the George Floyd protest in Downtown Buffalo. She is tweeting the very latest.

Police on the move. Forming a line at Mohawk facing both directions now. pic.twitter.com/axovkl7XFj

I spoke too soon. There was just a flurry of activity. Some runners. But now it looks like a lot of demonstrators have moved to surround this man in the middle of Delaware Avenue. Unclear what he is saying. pic.twitter.com/WtbbLKXIBv

Starting to hear some loud noises. Possible fireworks here and there.

Update. Police have moved in to form a line and pushing some demonstrators back from building. People upset at being touched. pic.twitter.com/qSVPivS9Qt