Two people commit the same crime, one gets 20 years in prison the other 5 years probation 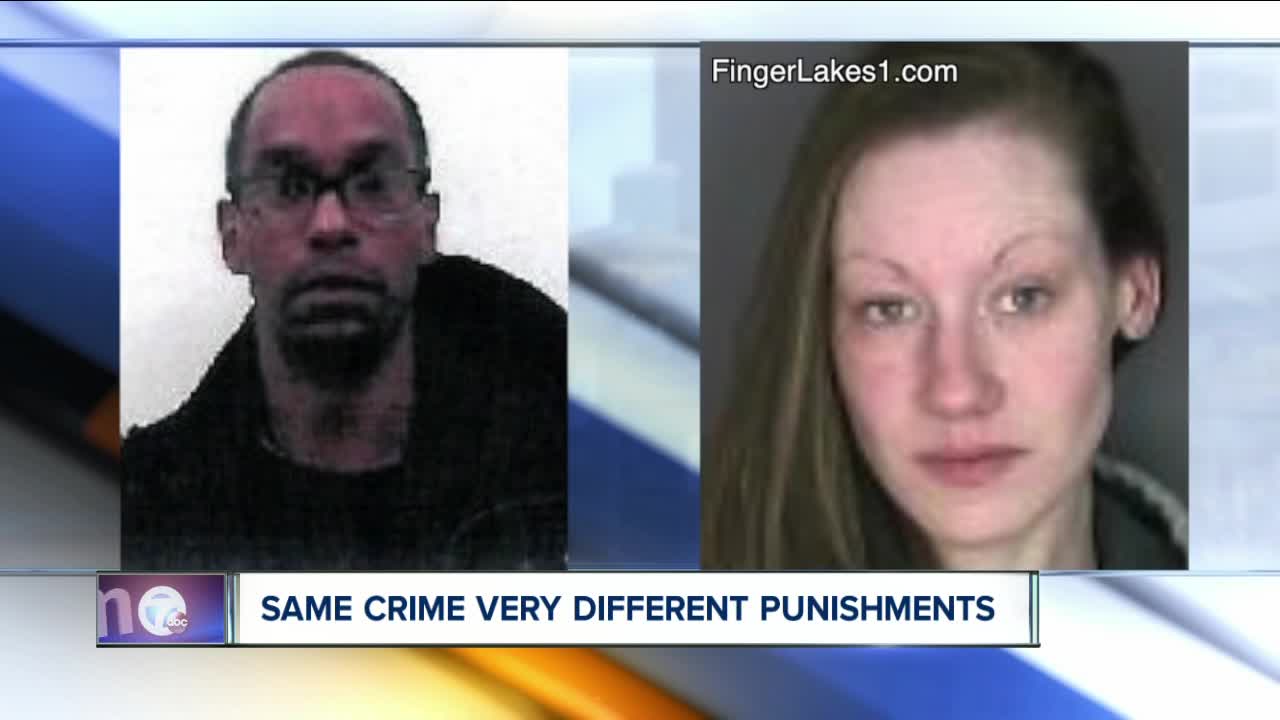 BUFFALO, N.Y. (WKBW) — In separate cases in different parts of the state, Carlique DeBerry and Marla Fenner sold fatal doses of fentanyl. One got a 20-year prison sentence. The other received 5-years of probation.

"I think these two cases are not examples of anything other than the facts. The facts and the law being applied correctly," Hon. Penny Wolfgang, a retired State Supreme Court Justice, said.

So why such a disparity between the two sentences if the crime was the same?

The reason - federal versus state courts.

Carlique DeBerry, 40, Buffalo, was charged with "distribution of fentanyl causing death" in a federal court.

"It was the drugs that the individual distributed that resulted in the death," U.S. Attorney James P. Kennedy, Jr., said.

That requires a mandatory minimum sentence of 20-years.

Marla Fenner, 27, Geneva, a first-time offender, traded fentanyl for two yogurts and an apple juice. That person later died from an overdose. The key to her case is that she was charged with "third-degree criminal sale of a controlled substance" in state court.

That sort of conviction generally results in probation over prison time.

She wasn't charged with a homicide or even criminal negligence (indirectly causing someone's death). According to the First Assistant District Attorney Jason MacBride, under state law, proving a direct link between someone who overdoses and the distributor isn't easy. In fact, distribution of a controlled substance warrants a more severe punishment than a criminally negligent charge. Distribution is around a nine-year sentence. Criminally negligent death is one to four years.

Simply put, federal laws are harsher than state laws. Plus, it's easier to prove a direct connection under federal statue.

But why did DeBerry's case go to federal court while Fenner's was in state court?

Kennedy said that local authorities will sometimes ask for the help of the federal government.

When Kennedy was asked if the local authorities look to the federal government because they know it will impose a harsher punishment to make a statement, he said "I think so."

In other words, police will ask federal prosecutors to help them make a statement.

So Why did they want to make a statement with DeBerry and not Fenner?

DeBerry is a known drug dealer and has a criminal record, according to prosecutors. Fenner was a first time offender. Officials said they believe she was not a dealer.

"Intent is an element," Wolfgang said.

There are multiple factors that contribute to a sentencing.

That list includes but is not limited to, "intent, selling for profit when you are talking about drugs, record of defendant, remorse," Wolfgang said.

Ontario County officials said they believe Fenner was not aware that she was exchanging fentanyl for groceries. They said she thought it was heroin.

In the case of DeBerry, officials aren't exactly sure if he was aware what was in the heroin he was selling.

Simply put, the reason the sentencings were so different is because one was convicted in federal court and the other in state court. The reason DeBerry went to federal court is because of a more serious criminal past. According to officials from both cases, race and gender were not a factor.