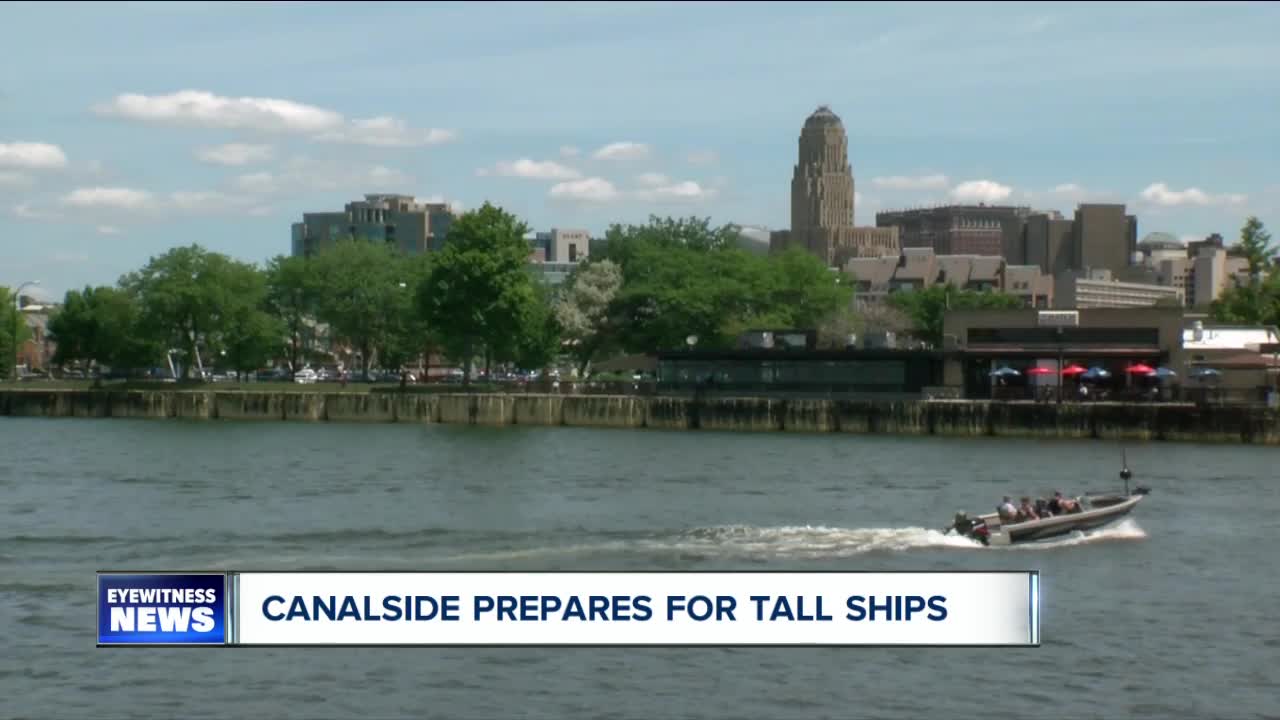 BUFFALO, N.Y. (WKBW) — A fleet of 12 historic, tall ships are on their way to Buffalo for the 4th of July holiday that is expected to draw thousands of people to the city's waterfront.

However, organizers are reminding the public there are easy ways to see the ships without trying to drive your vehicle to either Canalside or the Erie Basin Marina.

The first option is when the tall ships sail into the Buffalo Harbor at 2 p.m. on Thursday July 4th.

Spectators should use five miles of open-water shoreline along Fuhrmann Boulevard on Buffalo's Outer Harbor.

For those who have not been to the area, there is plenty of free parking and several new park areas, like Wilkeson Pointe, that have restrooms.

After sailing up the outer harbor, the tall ships will dock at the Erie Basin Marina, Canalside and Riverwalk.

People going to tour the ships, or view them up close, should remember that several streets around Canalside and Erie Basin Marina will be closed - with limited access only to people who live there, have boat slips, or are going to the Templeton Landing restaurant.

The next best option is to Park & Ride using the NFTA Metro Mail system.

Kim Reynolds, Transportation Chair for Port of Call: Buffalo, said there are 14,000 parking spots along Main Street that are a short walk to a Metro Rail station.

The Metro Rail offers free service for its above ground section on Main Street, but people can also use Park & Ride lots at the NFTA LaSalle and University stations which are further out from downtown.

There is a Canalside station for the Metro Rail which is just a short walk to where some of the tall ships will be docked.

The City of Buffalo is reminding people there are numerous parking lots east of Main Street close to Canalside.

BE ADVISED! Don't use Ohio Street as it is already very congested due to its use as a detour for Skyway construction.

The new crowd plan is the direct result of a traffic gridlock situation in 2016 where a large Canalside concert, festivals, and the visit by the world's largest floating duck created a nightmare traffic situation.

Port of Call: Buffalo put out the following advisory with more details so you "know before you go"

"With the arrival of the tall ships fleet, Basil Port of Call: Buffalo, a four-day, family-friendly celebration of the city’s maritime heritage will take place along the downtown waterfront on July 4-7, and here is what festival-goers need to know.

A comprehensive transportation plan makes the four-day event easily accessible. Instead of driving, festival-goers are advised to use the NFTA-Metro Park & Ride options offered at more than 20 locations across WNY including LaSalle Station at 3030 Main St., and University Station at 3435 Main St.

Nearly 14,000 parking spots have been identified along the Metro Rail Main St. spine that are within a one block walk of a Metro Rail station or Canalside.

Limited paid parking will be available in the lots at Waterfront Village, 50 Lakefront Blvd. Erie Street and part of Marine Drive will be closed to all but residents, marina slip holders, and shuttle buses. Sail-away customers and restaurant patrons can use the pay-to-park lots at Waterfront Village. Trailered boats will not be allowed on Erie Street. Sail-away ticket holders should plan to arrive at least 60 minutes prior to ship departure.

Motorists are advised to avoid the Ohio Street exit off the Skyway. If traveling on Route 33, use Goodell St. exit to Main Street for various parking and Metro Rail options. From I-190 North or South, take exit 6 /Elm St, then left on Clinton to Main.

Safety and security will be tight, since this is a federally-designated Marine Event of National Significance. A list of prohibited items is posted at https://portofcallbuffalo.org/schedule/before-you-go and at the ticketed-area screening gates near the ships; such items can be returned to the car or thrown out at the gates. Prohibited items include backpacks, umbrellas and selfie sticks, food and liquids (including full water bottles), and coolers (except for baby or medical supplies). Hand bags and camera bags will be checked. Strollers are not allowed aboard ships, but can be left at the gangways. Visitors should be careful on docks and gangways when boarding the ships; safe shoes are recommended and no high heels. They can enjoy their experience and talk to the crew, but since others are waiting in line, not linger overly long.

There will be free dockside interpretive sessions at 10 a.m. each day with captains or crew from the ships docked along Erie Street, for those with mobility issues or sight or hearing impairments. ASL interpreters will be available. Bluenose II can accommodate wheelchairs on deck. Qualified service dogs can be accommodated at the ticket area gates, but not aboard vessels where ship ladders may be encountered. There are limited VIP passports with fast-pass access; and visitors need to understand that access. Boarding queues will be closest to the ships, so although the vessels can be seen from nonticketed areas, getting close to them requires a ticket to get into those queues and security screening is required. Sailing ships have limited capacity, so there in not an unlimited supply of tickets.

On July 4th, there will be a moving safety zone around the Parade of Sail, and law enforcement vessels will keep spectator craft at least 100 yards from the vessels. The parade will be surrounded by a cordon of blue-light agency boats and a boating-organization escort fleet. Once the ships are docked, recreational boats – including kayaks and personal watercraft – will not be allowed within 25 yards of the hulls. The Parade of Sail will enter the outer harbor from the lake through the restricted South Entrance off Tifft Street, proceed under sail the length of the Outer Harbor, and disperse to the docking areas after cannon salutes from Lighthouse Point. After the parade passes, the safety zone disappears with it and it’s boating as usual on the water.

In case of stormy weather, the parade may be shortened or cancelled. The shortened route would take ships directly through the North Entrance off Lighthouse Point to their docks. The FAA has temporarily restricted airspace above this event, and only one media drone has received a waiver, with restrictions, to operate. The closed airspace rule will be enforced, for safety and security reasons.To board any of the tall ships, Passport Vouchers can be purchased at all participating Wegmans locations throughout WNY, online at www.TallShipsBuffalo.org or at any ticket tent at the event.