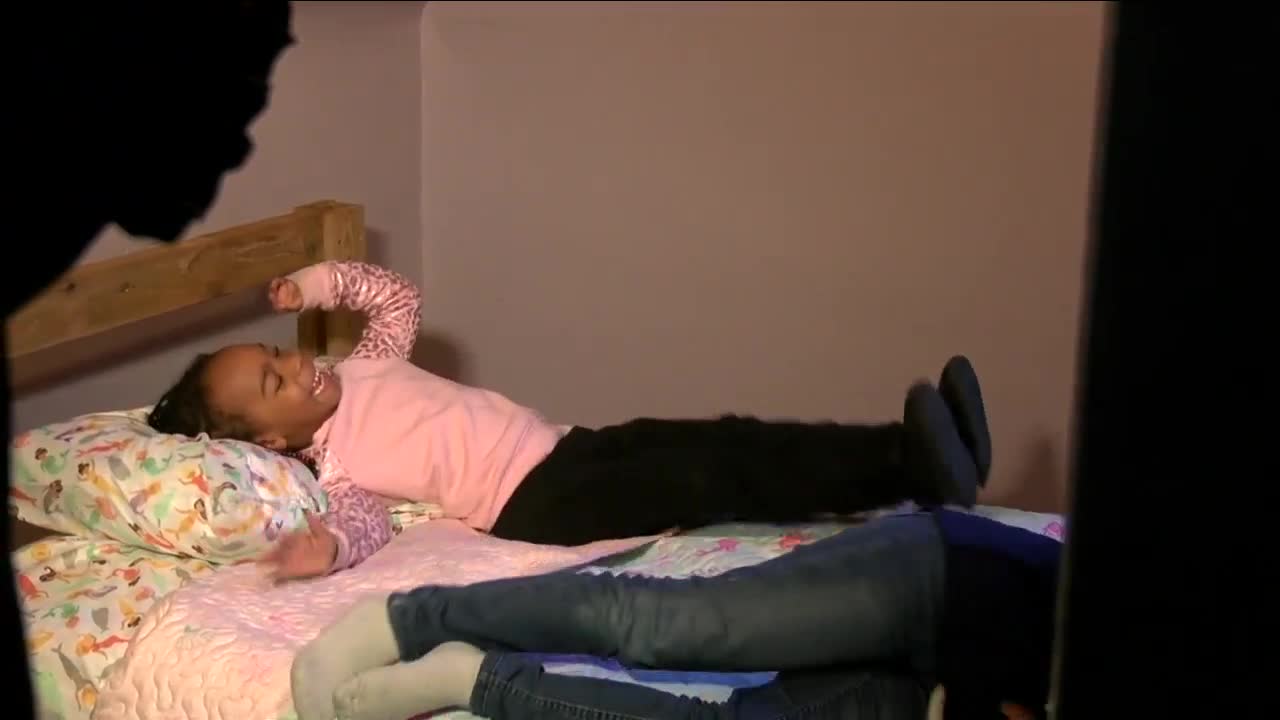 Sleep in Heavenly Peace has delivered their 100th bed to children in need. The non-profit builds beds for kids who would otherwise be left without. 7-year-old Samaria Robinson and her sister, 5-year-old Londen Robinson, were delighted with their new bedding as well. BUFFALO, N.Y. (WKBW) — Sleep in Heavenly Peace has delivered their 100th bed to children in need. The non-profit builds beds for kids who would otherwise be left without. 7-year-old Samaria Robinson and her sister, 5-year-old Londen Robinson, were delighted with their new bedding as well.

She picked out a new brand new comforter covered in mermaids, while Samaria chose butterflies.

“My favorite part about today is seeing my new bed,” Samaria said, “I like rolling around in it. It's so fluffy!”

The girls’ mom, Briana Ross, and their two-year-old sister Kennedy Jones, just moved back to Buffalo from Dallas.

“I was in a very bad relationship so I ended up just moving back,” Ross said.

But starting over hasn’t been easy.

“I’m a single parent so anybody can attest to this. When you are literally building your house from the bottom up, it gets pricey,” Ross said.

“These deliveries are what keeps our batteries charged,” said Jerry Sheldon, the chapter president of Sleep in Heavenly Peace, “To see the joy and the happiness these kids are experiencing. It's going to give them the opportunity to have their own space where they can hopefully get a good nights sleep.”

The organization's help brought great joy to the girls and even more to their mom.

“I don't like to cry, so I had to hold back tears. Just to see them happy, that's my whole existence. Just to have my girls happy, healthy, and just loving life,” Ross said.

It’s happiness Sheldon said he hopes to bring 200 kids by the end of the year through Sweet Dreams for the Holidays.

“In that time period we will hopefully do another 100 beds so by the end of the year we'll be able to donate over 200 beds in a short period of about 4 and a half months,” Sheldon said.

There are more than 240 chapters of Sleep in Heavenly Peace across the country. Sheldon said many of which marked the milestone of delivering 200 beds after a couple years. Sheldon said the Buffalo chapter will do it within five months.

It’s all so more kids can end up just as happy as Samaria and Londen.

“They are so excited. I couldn't ask for anything more,” Ross said.

If you or someone you know has a child that needs a bed, fill out the online application here. If you want to volunteer, click here. To donate, click here.