Local business owners are concerned about construction on Allen Street 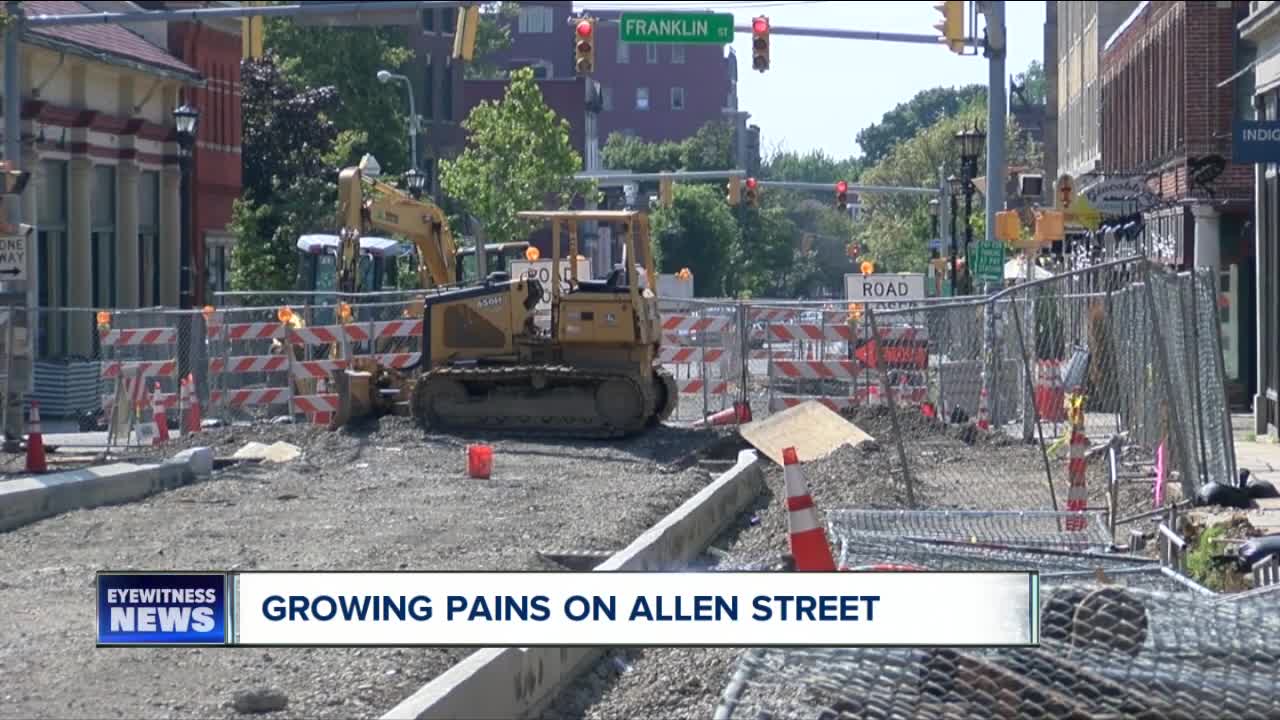 Construction on Allen Street between Main Street and Delaware Avenue is meant to widen the street, install new sidewalks and improve the aesthetic of the street with more pedestrian-friendly features. But construction in the area has some owners worried.

BUFFALO, N.Y. (WKBW) — Construction on Allen Street between Main Street and Delaware Avenue is meant to widen the street, install new sidewalks and improve the aesthetic of the street with more pedestrian-friendly features.

But construction in the area has some owners worried. Work on the stretch of Allen Street means no traffic can come through and there is no parking.

"We've definitely had our slow days because of it. I guess everybody's affected by it in some way because, you know, there's less traffic down here right now," said Giovanni Centurione, Owner of Trend Up. Centurione opened his business on Allen Street in May of last year.

"Unfortunately we have seen it slow significantly," said John Kary, Don Tequila's manager. "We had a short close for a couple of months when ownership changed hands here and unfortunately without the traffic up and down the street, not a lot of people are aware that we reopened."

And Cafeology has been hit pretty hard. Owner Hamada Saleh said he lost customers, had to let staff go, change business hours and close the kitchen.

"I don't know how long I'm going to be able to last in this location. There's no sidewalks, no parking and it's been like this since the third week of April," said Saleh.

Phase One of the project focused on block-by-block reconstruction between Main and Delaware for four to six weeks at a time. The first block to close to traffic was between Main and North Pearl, where Cafeology is located.

In a statement emailed to 7 EWN, Commissioner of the Department of Public Works Michael Finn said:

Work has been progressing on the first two blocks of Allen Street between Main Street and Franklin Street. We anticipate that the first block between Main and North Pearl will be opened to traffic by Labor Day week. With every construction project there are challenges encountered in trying to maintain access for businesses and residents. The city predicted many of those challenges and made adjustments to the scope of work in order to minimize the impact to businesses and residents. Some of the adjustments include fully closing the road block by block so that the work could be done faster. We also included adequate staffing on the construction support team so that staff was available to work with businesses and residents through issues that arose during the work. So far the work has generally gone according to plan and the city anticipates opening the block between Main and North Pearl by early September, weather permitting.

Saleh said he's looking at options to try and save Cafeology, and wishes more people would support local businesses.

"We're just trying to make the same paycheck anyone working for any other company is trying to do," he said. "The owners are real people."

Phase Two of the project would stretch from Delaware to Wadsworth on Allen.