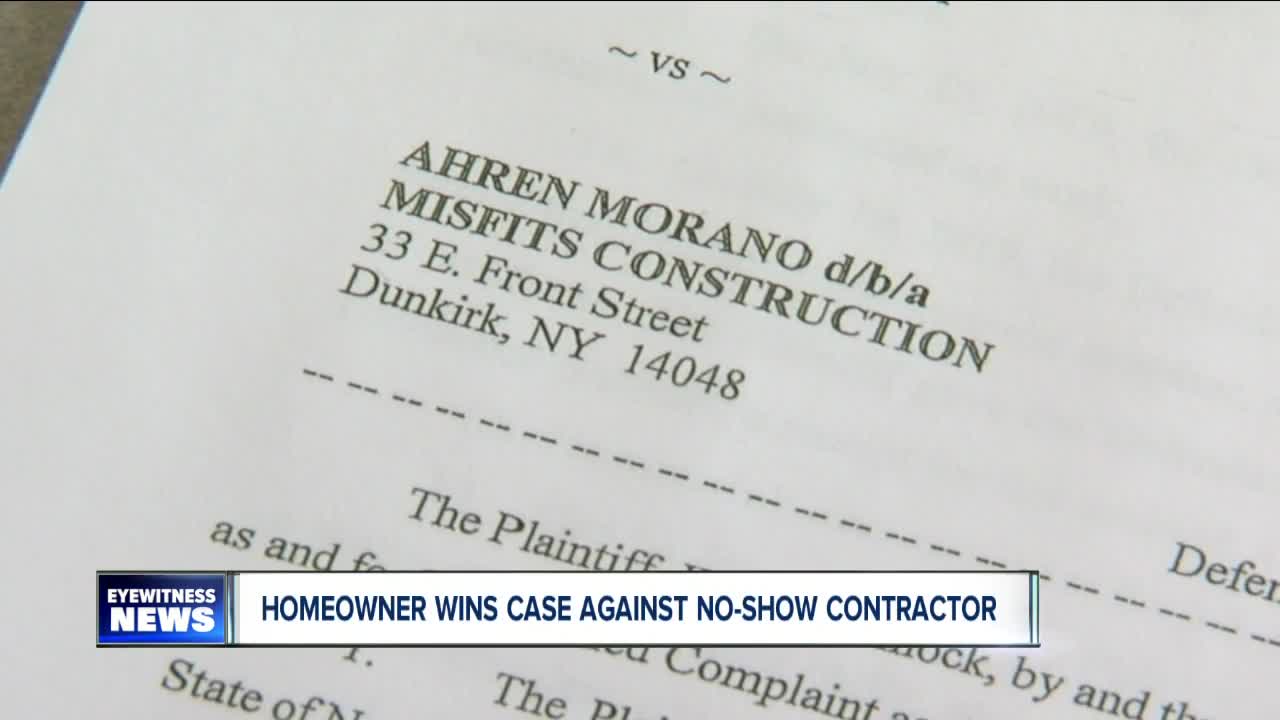 DUNKIRK, N.Y. (WKBW) — William Smock is warning the public about Misfits Construction from Dunkirk after the Jamestown homeowner said he paid $6,000 in deposits for work that was never done.

"Up until August 13th, he had not shown up to do the job. There were five (5) occasions were he said he would be there and never showed up. So my wife and I decided to terminate the contract," added Smock, who said the company owner, Ahren Morano, apologized and promised to return the deposits.

Despite text message promises that a check was in the mail, no money was ever sent back to the Smock's.

"It disheartens me but at what point does it become criminal and you can't do this anymore?," added Smock.

The homeowner then took his complaint to Jamestown Small Claims Court where a judge issued a judgment against Ahren Morano, DBA Misfits Construction, for $6,324.65 on October 22, 2019.

More than a month later after the judgment, the Smock's had still not received their money.

"It is frustrating but it is also frustrating because I feel there are other people out there who could be taken advantage of," commented Smock.

When 7 Eyewitness News Reporter Ed Reilly contacted Ahren Morano about the situation, Morano insisted that he was trying to rectify the problem using a lawyer and claimed he was not properly notified about the civil case in Jamestown City Court (Smock claims Morano was served notice on two occasions).

Morano wanted Ch7 to drop the story with promises that he would make a last-minute payment to the homeowner. However, after reviewing the circumstances of the viewer's complaint, the amount of time that had transpired, and talking with William Smock, it was decided to air the details of the story as a warning to others who may be considering doing business with Misfits Construction.

Company owner, Ahren Morano, rushed to the attorney representing William Smock around 5 p.m., just before the CH7 story aired, to drop off $1,500 cash and a post-dated check for the balance of $4,824.65.

William Smock told reporter Ed Reilly that he and his attorney are now waiting to see if they were given a "good" check as they had some concerns that it may have been written on a bogus account.

The BBB gives Misfits Construction a "D" rating with another complainant alleging they were out $31,000 for unfinished and improperly done work.

William Smock admits that he needed to do more background research on Misfits Construction before hiring the company.

You can find more tips for hiring a contractor from the BBB here.