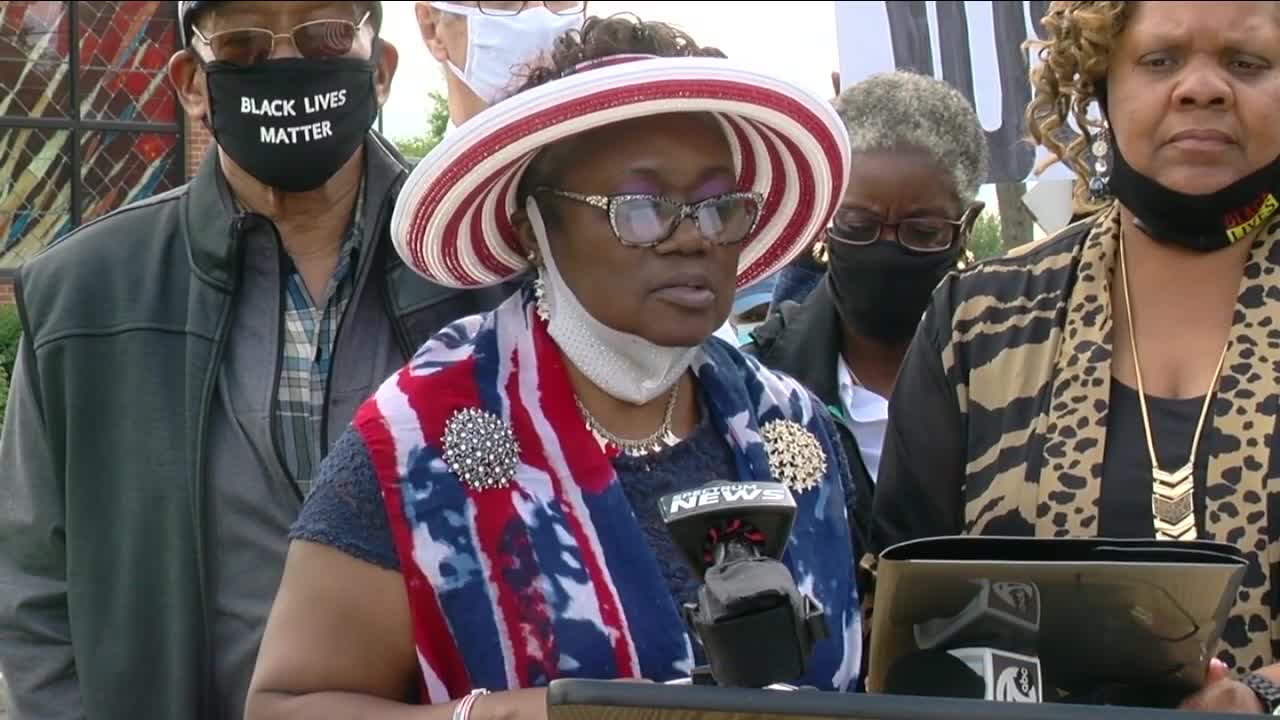 Vocal members of SS. Columba-Brigid Catholic Church are protesting the ouster of their beloved choir director by a priest who they say will not listen to their concerns.

BUFFALO, N.Y. (WKBW) — Vocal members of SS. Columba-Brigid Catholic Church are protesting the ouster of their beloved choir director by a priest who they say will not listen to their concerns.

A group of parishioners from the Hickory Street church held a news conference Friday to call attention to what they say is the unjust removal of Lynda Martin, the choir director, by Fr. William J. “Jud” Weiksnar, OFM, who is the parish's pastor.

The church is one of the few in the Catholic Diocese of Buffalo with a large Black congregation, and Martin was hired more than 30 years ago to arrange for the playing of Gospel-style music that is often featured in Black Christian congregations.

But the group said it believed Weiksnar did not like the music, so he abruptly fired Martin without notice or explanation and replaced her with a white choir director who sticks to the more subdued music style of traditional Catholic churches attended mostly by white people.

"I feel that unfortunately racism isn’t just black and white, it is also across the Catholic community," said parishioner Linda Lewis, who helped organize the news conference.

Weiksnar, who is a Franciscan priest, said in a Facebook message that he could not comment. He referred a reporter to the diocese's spokesperson.

Greg Tucker, interim spokesperson for the diocese, said in a statement, “The allegations pertaining to a personnel matter concerning an employee of SS Columba-Brigid Catholic Church are not something that we are able to discuss in any detail, given understandable privacy issues governing such matters. The Diocese of Buffalo takes very seriously these allegations, however, and will thoroughly investigate them with all appropriate individuals and protocols. The Diocese of Buffalo requires respect and fairness toward all employees and has zero tolerance for racism in any form.”

Parishioners also take issue with the way they say Weiksnar has handled the situation. They say he has refused to meet with them as a group to address their concerns and told parishioners that she retired, without mentioning that she was dismissed.

"Discriminatory conduct has been done," said parishioner Richard Clark. "She’s been denied equal conditions, terms of employment. The reasons [given] why she’s not around...people have been misinformed."

The group called the diocese and sent certified letters on July 14 to the offices of interim Bishop Edward B. Scharfenberger in Buffalo and Albany.

"And since that time there has been no response from anyone; not even an acknowledgement of the letters that were sent," Lewis said.

The group is seeking a meeting with Weiksnar or diocesan officials and is pushing for Martin's reinstatement. Martin said she has always worked with pastors to tailor the music style depending on the needs of parishioners who attend the church's three services each weekend.