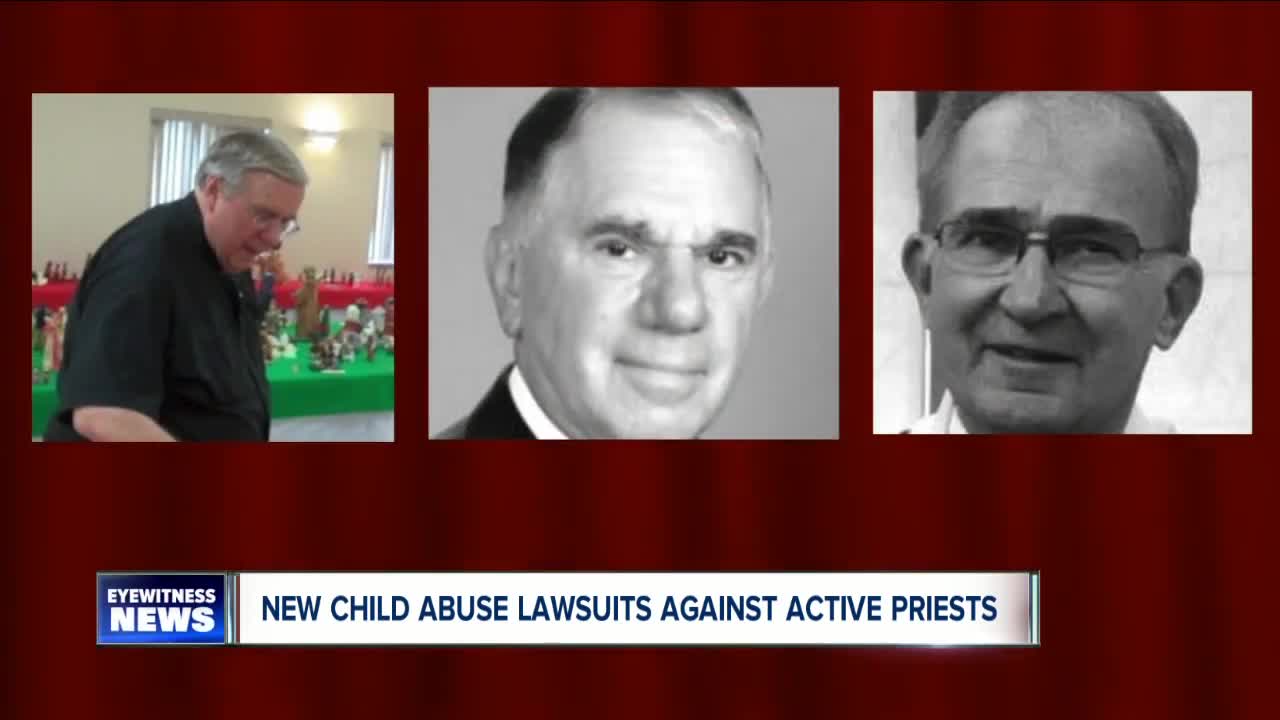 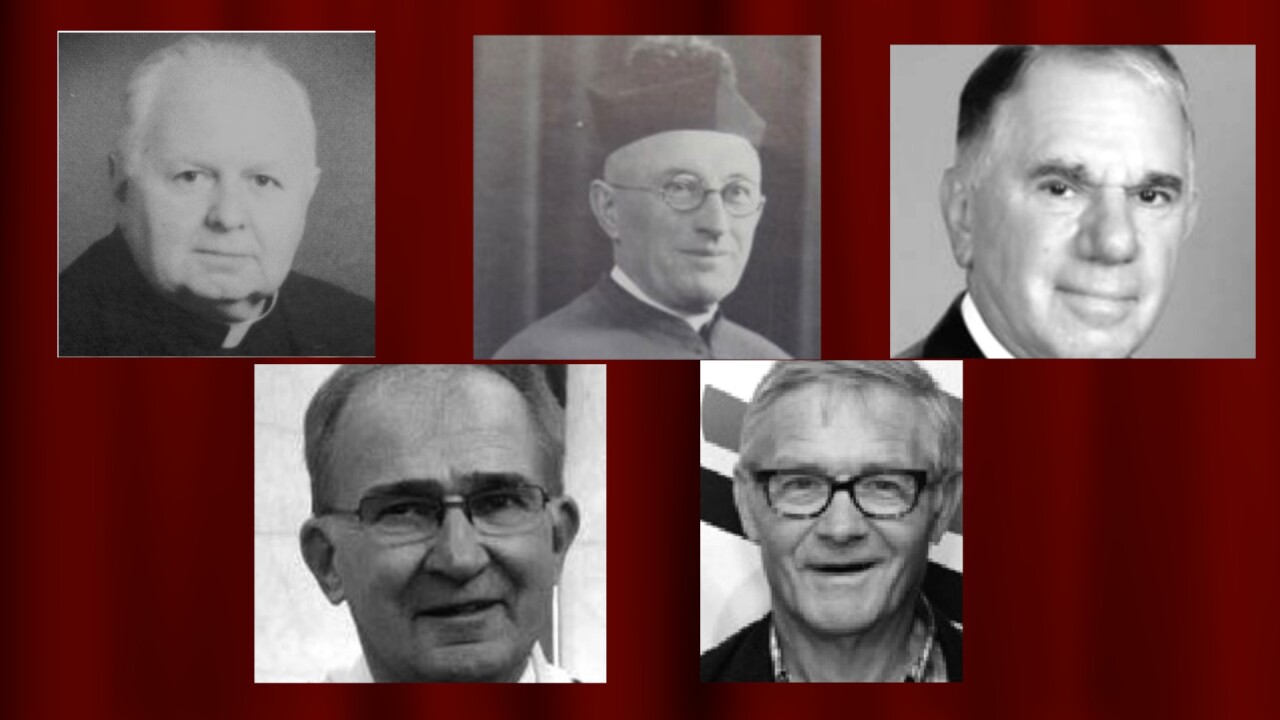 BUFFALO, N.Y. (WKBW) — The law firms of Fanizzi & Barr, from Niagara Falls, and Phillips & Paolicelli, from New York City, announced several lawsuits they are filing against the Diocese of Buffalo during the one-year window that is now open under the NYS Child Victims Act.

Former priest-whistleblower, James Faluszczak, joined with attorney Paul Barr to make the announcement in front of the Diocese of Buffalo's main office.

The lawsuits include a total of ten (10) priests, some living and others deceased, with five alleged perpetrators being named for the first time.

According to the law firms:

-Msgr. Joseph Gambino, deceased, who in 1948 is alleged to have sexually molested our client at Holy Cross Church, Buffalo.

-Fr. Edwin Fagowski, deceased, is alleged to have sexually molested our client at St. Benedict Church in Bennington, NY.Fr.

-Fr. Paul Nogaro, living and currently serving at St. Stephen Grand Island, NY, is alleged to have sexually molested our client while he was a student at St. Mary of Sorrows Church and School.

-Fr. Peter Popadick, living and currently serving at St. Aloysius Gonzaga, Buffalo, is alleged to have sexually molested our client while he was a student at Bishop Fallon High School.

-Franklin J. Tuchols, living, who over multiple years, is alleged to have sexually molested our client beginning at St. Mary Sorrows Church, and at multiple locations including St. John Vianney (now Christ the King Seminary) and private residences.

Additionally, we should announce that we are filing suit against the Diocese of Buffalo in response to alleged abuse by the following previously named:
Fr. Michael Freeman
Fr. Gerald Green
Fr. Brian Hatrick
Fr. Bernard Mach
Fr. William Ward

The Herman Law Firm announced Wednesday three lawsuits will be filed against the Diocese of Buffalo, with Rev. Roy Herberger, who the diocese exonerated from previous allegations, accused in a new CVA lawsuit.

Wow. Rev. Roy Herberger accused in a new CVA lawsuit. The @BuffaloDiocese exonerated him from previous allegation in December. (He maintained innocence). That makes THREE currently active priests under @BishopRJMalone who have been accused of sexually abusing minors today.

1. A lawsuit is being filed on behalf of an adult male who was sexually assaulted by Monsignor Edward J. Walker when the man was approximately 14 years old. Msgr. Walker anally and orally raped the plaintiff in the rectory of Holy Name of Jesus parish in Buffalo, NY. Msgr. Edwards is deceased but has been accused on multiple occasions of sexual assault.

2. A lawsuit is being filed on behalf of an adult male who was sexually assaulted by Rev. Michael Lewandowski, a Franciscan Friar, when the man was approximately 16 years old. The abuse took place at St. Francis High School in Athol Springs, NY. On multiple occasions, Lewandowski would force the plaintiff to wrestle, pulled the plaintiff's pants down and fondled his penis. Lewandowski was removed from public ministry in May 2014 after his Order received an allegation that he had sexually abused a minor in the 1980s.

3. A lawsuit is being filed on behalf of an adult male who was sexually abused when he was 8 years old by Father Roy Herberger who is still employed by the Diocese of Buffalo.

Bishop Richard Malone has previously said there are no priests with a substantiated, credible allegation of abuse against a minor still serving in the Diocese of Buffalo.

A spokesperson for the Buffalo Diocese says,

the litigation process has begun. The Diocese respects that process and will respond accordingly. All new allegations received [Wednesday] will be examined and investigated in accordance with the Charter for the Protection of Children and the Policies of the Diocese of Buffalo and appropriate action will be taken as required

7 Eyewitness News contacted all the active priests who have been sued for a comment.

He told reporter Ed Reilly that he was not the person who abused a child at St. Ann's Church in the mid-1980's. Herberger said he presented evidence to a diocesan investigation panel proving it was not him. The priest said he feels "sad" for the victim and "prays" for him.

Fr. Herberger said he will now use the services of the same lawyer who represented him during the diocesan investigation.

The Diocese of Buffalo issued a comment concerning the Herberger lawsuit:
"The claim against Fr. Herberger was presented to the Independent Review Board and they found it to be unsubstantiated."

Search through the entire database compiled by 7 Eyewitness News

NOTE: This database contains information publicly available at nycourts.gov. Plaintiffs named in the database filed claims using their names. In the cases of plaintiffs who filed anonymously, 7 Eyewitness News included the Doe/Roe name and number assigned by the representing attorney.