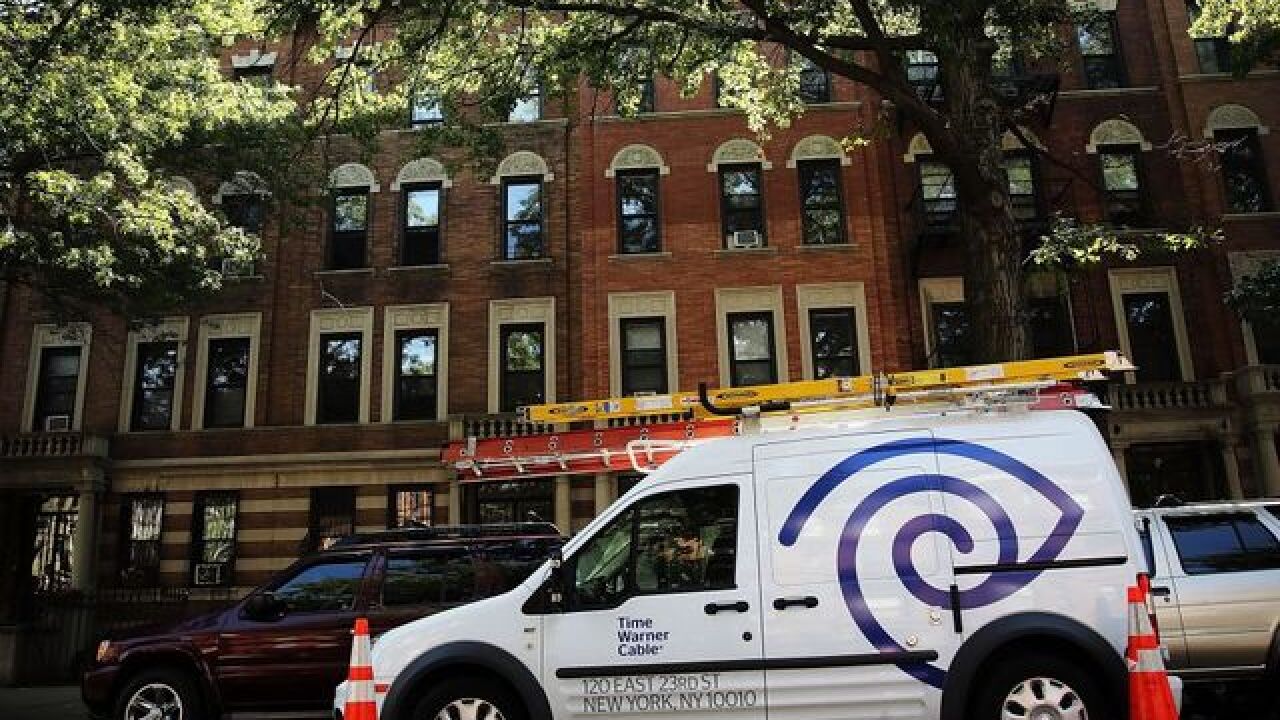 The Justice Department approved the deal Monday, subject to court approval on the conditions, while Federal Communications Commission Chairman Tom Wheeler circulated a draft order to OK the combination. That leaves California's utility regulator, whose approval is expected in May.

Buying Time Warner Cable and Bright House Networks will turn Charter Communications, a mid-size cable company, into the country's No. 2 home Internet provider, after Comcast. The new Charter will be No. 3 in video, trailing Comcast and AT&T, which bought DirecTV last year.

To preserve competition from online video services, the Justice Department is forbidding Charter from restricting what media companies make available online. The government says Time Warner has been aggressive at imposing such restrictions in contracts, and without a ban, a bigger company could make online services less competitive.

Meanwhile, the FCC is expected to prohibit Charter from charging consumers more for using more data, the way wireless and some home services are priced. Video is one of the biggest consumers of data, and caps or usage-based prices could make consumers reluctant to watch online video.

Public-interest groups have protested industry consolidation, saying it has led to high prices and will give big companies the power to undermine online video rivals. But opposition to Charter's deal was muted compared with the backlash in recent years to Comcast's failed bid for Time Warner Cable. That's because a bigger Charter would still be smaller than Comcast. And Charter, learning from Comcast's failures, has made several promises to address concerns.

What does this $67 billion cable deal mean for consumers?

WILL THIS CHANGE WHAT I CAN WATCH ONLINE?

The conditions being imposed by the government don't necessarily make it easier for a company like Apple to launch a streaming TV service.

"The real limiter of online video hasn't been restrictions from distributors. It's been the self-interest of the programmer," MoffettNathanson analyst Craig Moffett said. The traditional big bundle has lined the pockets of entertainment companies like Disney. A skinny bundle of channels online isn't as lucrative and could steal viewers away from the fat TV packages supporting hundreds of channels.

But Moffett says the Internet video market is going to develop, and the government "wants to ensure that the distributors don't stand in the way when the time comes."

To that end, Wheeler's draft order would impose additional conditions:

— Charter also won't use data caps or charge customers based on how much data they use, like Comcast and AT&T U-verse do.

But Charter could, for instance, raise prices on broadband sold by itself to make its cable video-and-Internet bundle look more financially appealing than buying Internet from it and a separate online video service.

George Slover, senior policy counsel for the advocacy group Consumers Union, said that while the conditions seem promising, "history has shown us how powerful companies look for every angle to avoid or weaken the conditions."

WHAT HAPPENS TO ME AS A TIME WARNER CABLE CUSTOMER?

Charter will continue Time Warner Cable's efforts to increase Internet speeds. Over the next few years, Charter says it will raise the minimum Internet speeds in acquired markets to a minimum 60 megabits per second, which lets you download a high-definition movie in about 10 minutes. That costs $40 a month, for now.

Charter's prices are cheaper than Time Warner's overall, says UBS analyst John Hodulik. But Time Warner has some cheaper deals with slower Internet speeds; Charter will get rid of most of those for new customers.

There could possibly be better customer service. Charter says it will hire 20,000 people in the U.S., replacing Time Warner's overseas customer service representatives and its use of contractors for technicians, to provide better support. It doesn't give a timeframe for the hires.

WILL MY BILLS STILL GO UP?

Probably. Cable companies have been passing on to customers the higher prices they pay for rights to carry channels on cable lineups, and their costs are still rising. Still, Charter will use its bigger size to seek better deals with channel owners like Disney and Fox.

But the cable industry has been consolidating for decades, and bills have only gone up.

Charter will be the only supplier of broadband speeds, as defined by the FCC, for two-thirds of the homes in areas where it operates, according to FCC data. But the FCC is requiring Charter to reach another 2 million homes with high-speed services; at least 1 million of those homes would be in competition with another broadband supplier.

Even if bills still go up, Charter said they won't be as high as they would have been as separate companies.

There will be a $15-a-month Internet service for some low-income households.