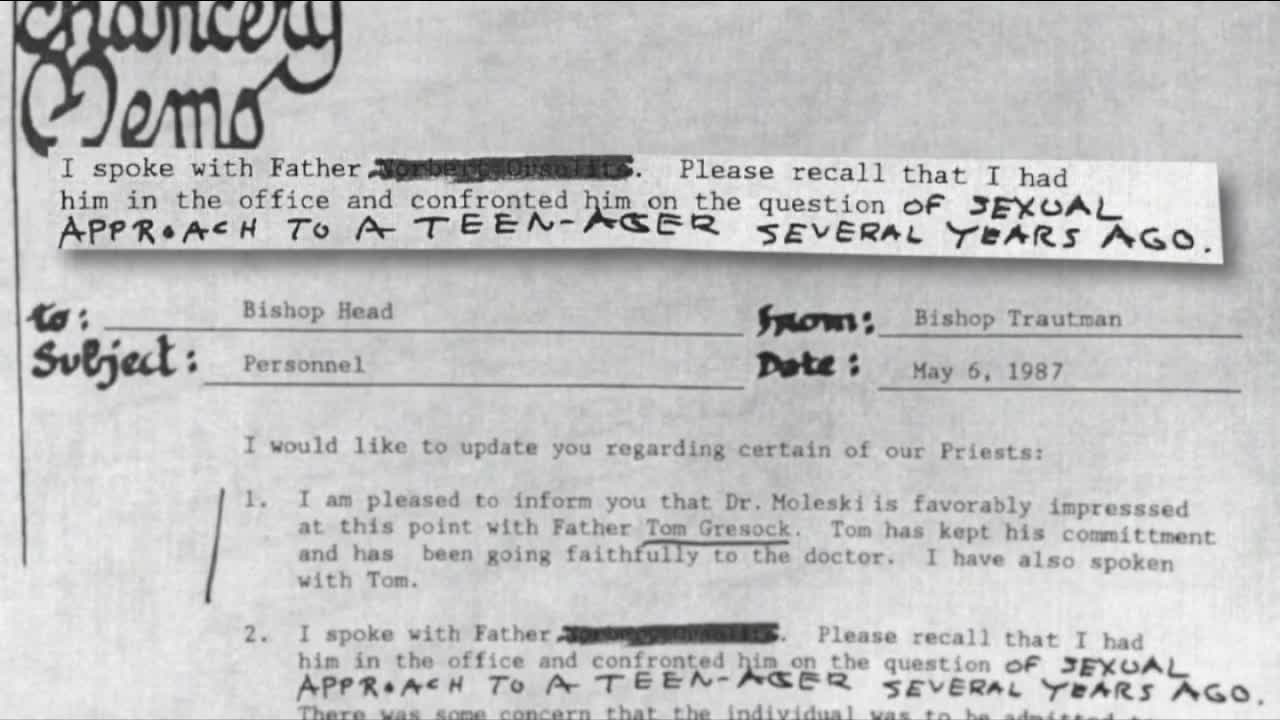 The Buffalo Diocese knew of Fr. Norbert Orsolits' conduct in the 1980s, despite its lawyer's previous claims, records show.

BUFFALO, N.Y. (WKBW) — The man who started what would become a 'tsunami' of sexual abuse claims against the Diocese of Buffalo received a settlement offer of less than $50,000, he said Thursday, even though the church has offered more than ten times that amount to other victims of abusive priests.

In addition, 7 Eyewitness News has obtained internal documents that show more than a dozen people have now come forward to say they were abused by Fr. Norbert Orsolits. The documents also indicate that church leaders knew about Fr. Orsolits’ behavior earlier than they originally let on.

Michael F. Whalen Jr. of West Seneca said he was a victim of 'horrific' abuse in the 1980s at the hands of Fr. Orsolits, a priest at St. John Vianney in Orchard Park. He was the first Buffalo abuse victim to go public with his story in March and his testimony encouraged hundreds of others to come forward.

He expected a just settlement but instead said he was "revictimized" by the offer of less than $50,000 for a lifetime of pain and suffering.

"My life was ruined by this man," Whalen said Thursday at a news conference across from the diocesan chancery. "To get such a low settlement offer, it hurt me. It hurt my family. I couldn’t believe it was that low."

He said the amount doesn't come close to covering 40 years of counseling sessions and drug and alcohol rehab which was necessary after holding the abuse inside for decades. He intends to reject the offer and may sue the diocese if state lawmakers pass the Child Victims Act next year.

"Make no mistake, Michael’s abuse was horrific," said Robert Hoatson, a victims advocate who encouraged Whalen to come forward in March. "There wasn’t anything that in any way would cause anyone to think that Michael Whalen was not viciously abused."

The settlement amounts are determined by retired state judges Jerome Gorski and Barbara Howe, who were hired by the diocese to administer the settlement program. Earlier this month, they offered an alleged victim of Fr. Fabian Maryanski $400,000 and an alleged victim of Fr. Michael Freeman $650,000 for their suffering. Boston attorney Mitchell Garabedian, who represents Whalen, said Wednesday that 13 of his clients have received settlement offers from the diocese, ranging from $10,000 to $340,000.

Asked whether he felt he was being punished for helping to spark the public airing of clergy sexual abuse in the diocese, Whalen said "who knows," but Hoatson added whatever the intent, it has had that effect.

"I fight tooth and nail to pay my bills and to pay my mortgage and make sure my kids are fed," Whalen said. "Money helps, yes, it would help me a lot, believe me, but it’s not that. It’s the validation that they hid these priests and they moved them around and they knew all about it for years and years and years and did nothing."

REPORTER:
“In the early 80s, when the reports came in on Orsolits, why didn’t the diocese go to the cops?”

But an internal diocese memo obtained by the I-Team shows otherwise.

The memo -- sent from former Auxiliary Bishop Donald W. Trautman to then-Bishop Edward D. Head -- quotes Trautman as saying, "I spoke with Father Norbert Orsolits. Please recall that I had him in the office and confronted him on the question of sexual approach to a teenager several years ago."

The memo was dated May 6, 1987. The diocese allowed Fr. Orsolits to minister for another 16 years.

“If the Diocese of Buffalo knew about Father Orsolits in the 1980s, why did they sit on this?” asked James Faluszczak, a former priest and abuse survivor. “And how long have the attorneys who are working for the Diocese of Buffalo been familiar with these allegations...also since the 1980s? Michael Whalen has been suffering with this for decades thinking that he was all alone, when Terry Connors perhaps, or the bishop himself, could very easily could have alleviated some measure of that suffering.”

Connors, Trautman and Bishop Richard J. Malone did not respond to a request for comment.

But other documents obtained by the I-Team show a total of at least 13 men have now come forward to the diocese with claims of abuse at the hands of Fr. Orsolits.

But the diocese has never defrocked the priest, so it still pays retirement expenses, including a check it cut in February, before the scandal broke.

“And I fight tooth and nail to pay my bills and to pay my mortgage and make sure my kids are fed,” Whalen said. “If it wasn’t for my kids helping me out, my girls...it would be tough on me.”

Whalen said he can’t even afford to fix the shingles that blow off of his roof in the winter.

While Bishop Malone pledged to sell his mansion to compensate abuse victims, Whalen was outraged upon learning the bishop spent $200,000 to renovate his new home.

The Catholic Diocese of Buffalo issued this response to the settlements:

- According to the Program, the claimant is free to accept or reject the awards issued by the Administrators - The Diocese is bound by whatever the claimant decides - The IRCP claimants are not bound by confidentiality, and are free to publicly discuss their claim and any aspect of the IRCP process - The Diocese, however, is bound by confidentiality and will not be commenting on specific claims