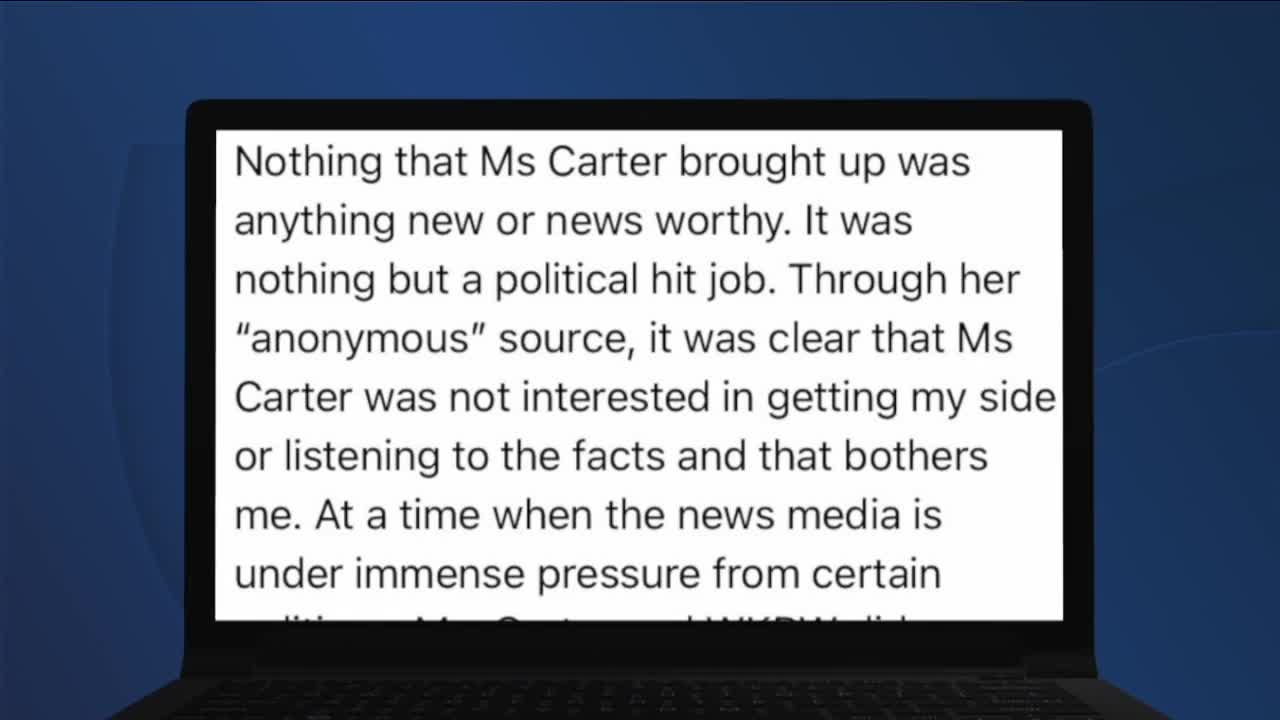 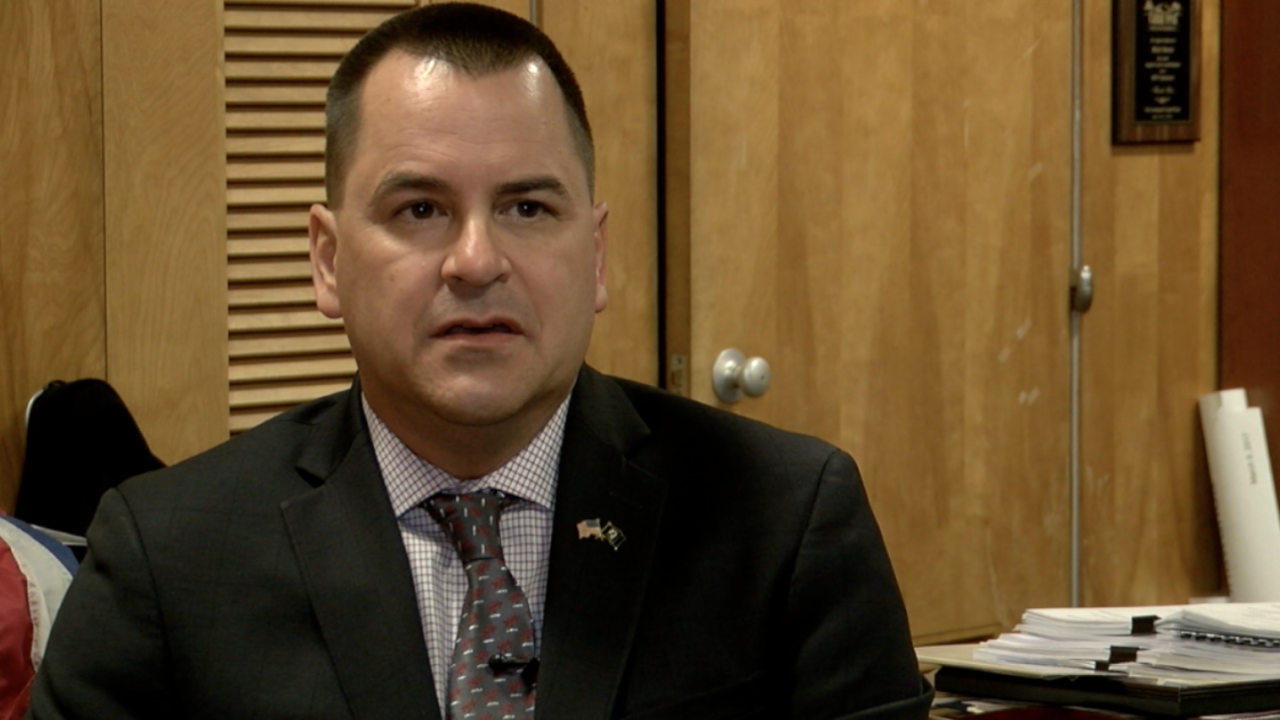 TONAWANDA, N.Y. (WKBW) — Tonawanda Mayor Rick Davis has spent the past month mocking our I-Team’s investigation into eight counts of alleged corruption against him.

Meanwhile, the Erie County District Attorney has continued to investigate him, as well.

We’ve learned through sources the City of Tonawanda has been asked to hand over all the documents we requested via multiple Freedom of Information Law requests over the course of our two-month investigation.

As we worked to verify we were being provided all the materials we requested, our I-Team learned all the members of the common council were doing government business on personal, not city email accounts.

Our legal analyst Florina Altshiler said that’s a matter of concern when it comes to public accountability.

“The danger of conducting government work on personal email is one, it doesn't become a part of the government record if a request is ever made for the information. Two, data breaches and security concerns,” she said.

Davis released the following statement on his social media pages the morning our investigation last month aired calling our work a "political hit job" and going on to say there was nothing "new or newsworthy" in our report.

Recently, I did an interview with Madison Carter of Channel 7 News and it was apparent from the very beginning, she was not there to get the story straight nor was interested in getting any resemblance of the facts. Unfortunately, this is what political coverage has become. Multiple times, she tried to insinuate that both myself and our Police Department were acting unethically without any supporting facts. It seems like political season has started a bit early this time around.

Thanks to my opponent in the last Mayoral Election, police reports surfaced that included my minor children that live with me. I have never spoken about these incidents because personal family life should be kept private, especially when there are children involved. I have never taken to any form of social media to disparage my ex-wife out of respect for our kids. It’s unfortunate that my ex-wife doesn’t share those same values and that should speak volumes about her character. All I will say is there is a reason why I received sole physical custody of the kids and I will leave the rest alone. My kids, family, and friends know the truth and what we all dealt with over the many years. Ms Carter went on to insinuate that the Police Department with held information in police reports because I asked them too. To make an accusation like that without any facts is immoral and quite frankly disgusting. The men and women of our police department are nothing but professional and I will attest to their honesty and integrity. This unfounded claim upset me more than Ms. Carter’s character assassination.

Ms Carter then went to make an unfounded and unverified claim that I rigged the bids for the Harbor House renovation in favor of my brother’s company. All of this information was shared with the Common Council by our Building Inspector during the entire process and they were fully aware of whom the low bidder was when they passed the resolution (unanimously) authorizing the work be completed. The City Ethics Committee even looked over all this and found nothing illegal or unethical was done. Facts that didn’t fit Ms Carter’s pre-conceived narrative.
Ms Carter went on to criticize me for the use of a city credit card to purchase a ticket when President Obama invited me and a plus one down to Washington DC to discuss Veteran Homelessness. The purchase of my wife’s ticket and any ancillary charges were fully reimbursed to the city. While I did nothing wrong, it was still a learning experience. I have made it a personal policy to not use the City credit card since 2017 and will wait for reimbursement from the city for future expenses.

Ms Carter then continued to harass me for some of my social media content. I happen to agree with her on some of my use of social media. I am human, just like the rest of us and, at times, have gotten caught up in the partisan political rhetoric that is sweeping the country. It’s been months since I deleted my Twitter account and I stick solely to my personal and Mayor Facebook pages to post anything. I don’t need to tell any of you that our City Facebook pages have become rife with racism and nastiness. I do not want any part of that and I apologize for any issues that any of my posts caused anyone. I would encourage everyone to take a step back from the toxic environment of social media and focus on family, friends and faith.

Anyone that also knows me knows I have a very large sense of humor. Sometimes I may take it a bit too far in some people’s eyes. I also apologize to anyone that I may have offended with my quacky sense of humor.
Nothing that Ms Carter brought up was anything new or news worthy. It was nothing but a political hit job. Through her “anonymous” source, it was clear that Ms Carter was not interested in getting my side or listening to the facts and that bothers me. At a time when the news media is under immense pressure from certain politicos, Ms. Carter and WKBW did themselves a disservice by not getting all the facts and jumping to conclusions. I have lost a lot of respect for her and for WKBW journalistic abilities to be fair and impartial.

I have thoroughly enjoyed the almost 7 years I’ve been your Mayor. Public service is the reason why I ran for office after getting out of the Air Force. Anyone that knows me knows how much I love this city and want it to prosper. I have also made my fair share of mistakes in life and I have always owned them. As Henry Ford famously stated “the only mistake is the one not learned from”. I look forward to the many projects that are ongoing that will make our city an even better place to live and raise a family. I also look forward to tackling the challenges that are facing our city in the months ahead due to Covid. Thank you for taking the time to watch this, God Bless, and please stay safe.

Davis's lengthy statement was released before reading or watching our story and included a number of topics we did not include in our report to the public as our I-Team maintains rigorous standards to verify accuracy and fact-check all materials we publish.

When challenged by a constituent on Facebook after he admitted to stealing taxpayer money for personal use by buying his girlfriend a plane ticket he said, “I’m sorry you believe that hit piece that quite frankly belongs in the National Inquirer (sic).”

The DA’s office says Davis is still under investigation, but could not provide any additional comments on where that process stands.