Catholics poured their hearts out to Bishop Malone. He blocked their emails.

Outraged Catholics asking him to resign 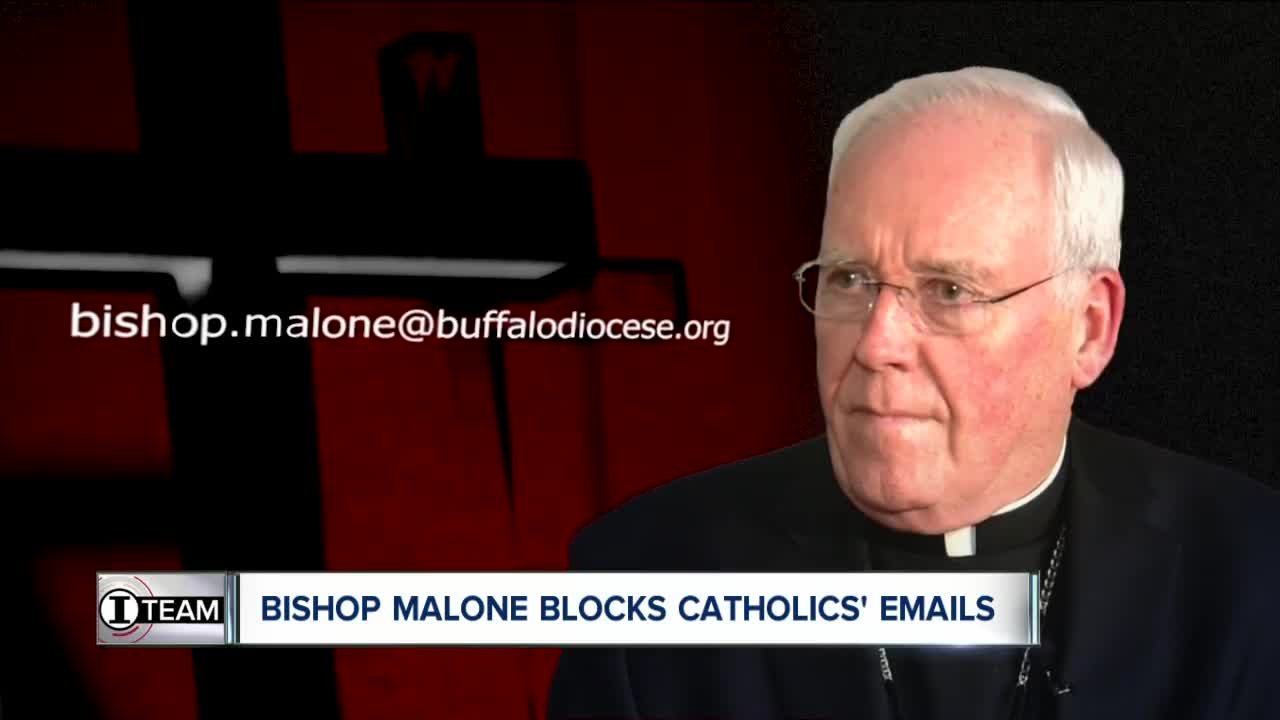 Bishop Malone shut down his email address after Catholics began sending him emails asking him to resign.

“Just today [I got] probably 12 or 13 either voicemails or emailing saying, ‘Stay with it, we need you, do not resign,’” Malone said Friday.

But that would soon change.

Within hours of hearing the bishop’s interview, Catholics across Western New York -- young and old, practicing and lapsed -- began flooding the bishop’s email with letters asking him to resign.

Many of the Catholics -- 52 of them, to be exact -- copied the 7 Eyewitness News I-Team on the emails sent to the bishop. All 52 asked for his immediate resignation.

“I think we've all come to the realization now that it's time for the bishop to go,” said William Ogilvie, a parishioner at Nativity of the Blessed Virgin Mary Church in Clarence. “The large majority of people in my parish specifically -- and in all the parishes, from what I have seen -- the large majority want the bishop to resign.”

The messages sent by Catholics to the bishop said things like:

“...Because of you Bishop, I have thought of leaving the faith…”

Click here to read all of the letters sent to Bishop Malone and the I-Team.

“I sent this email and it bounced [back] and so right there [it] indicates that they're fortifying the bunker,” Polvino said.

Polvino was trying to send Malone a heartfelt email describing his abuse at the hands of Rev. Donald Becker. He wrote about the effects of the abuse on his relationships with his wife and children.

He wanted to tell the bishop how he told his family about the abuse for the first time last year, after fellow survivor Michael Whalen broke his silence.

“I don't think he understands it all the irreparable damage that that these acts have caused,” Polvino said of Bishop Malone.

But Polvino's email bounced back to him. He couldn't get through to the bishop.

“It just reinforces that he, he just doesn't care about his flock,” Ogilvie said.

The bishop's spokeswoman, Kathy Spangler, did not respond to multiple messages this week seeking information about why the bishop’s email address was shut down. A diocesan source confirmed the email shutdown was the talk of many employees at the Catholic Center this week. Spangler also did not respond to messages asking whether there was a different way Bishop Malone wanted to receive messages from Catholics.

None of this surprises the bishop’s former secretary, Father Ryszard Biernat.

“He ordered us -- in a number of meetings -- not to forward him any negative messages,” Biernat said Tuesday on WBEN.

Ogilvie, though, said the petition drive he started last year on Change.org asking for the bishop’s resignation has picked up momentum. Click here to access the petition.

“The bishop may have closed his email...but the petition has allowed people to [write] comments and many of them are very heartfelt,” Ogilvie said. “The response has just been overwhelming. We've received over 11,000 signatures, asking Bishop Malone to resign.”

He said comments and signatures have flooded in since the I-Team’s broadcasting of The Malone Recordings last week.

Ogilvie said the bishop needs to put aside what Ogilvie calls “narcissism” and allow Catholics to have their say.

“At least let people know that he hears them rather than ignoring it,” he said. “And quite frankly, lying to us about the support that he has in this community.”

Polvino said the email controversy is “beyond damage control.”

“I believe that he is fighting for more self-preservation than he is for the preservation of the diocese,” he said of Malone. “I think he's trying to protect his legacy, but he has none. He is a ruined man as far as I'm concerned.”

This is a developing story. Watch 7 Eyewitness News at 6 p.m. for more information.