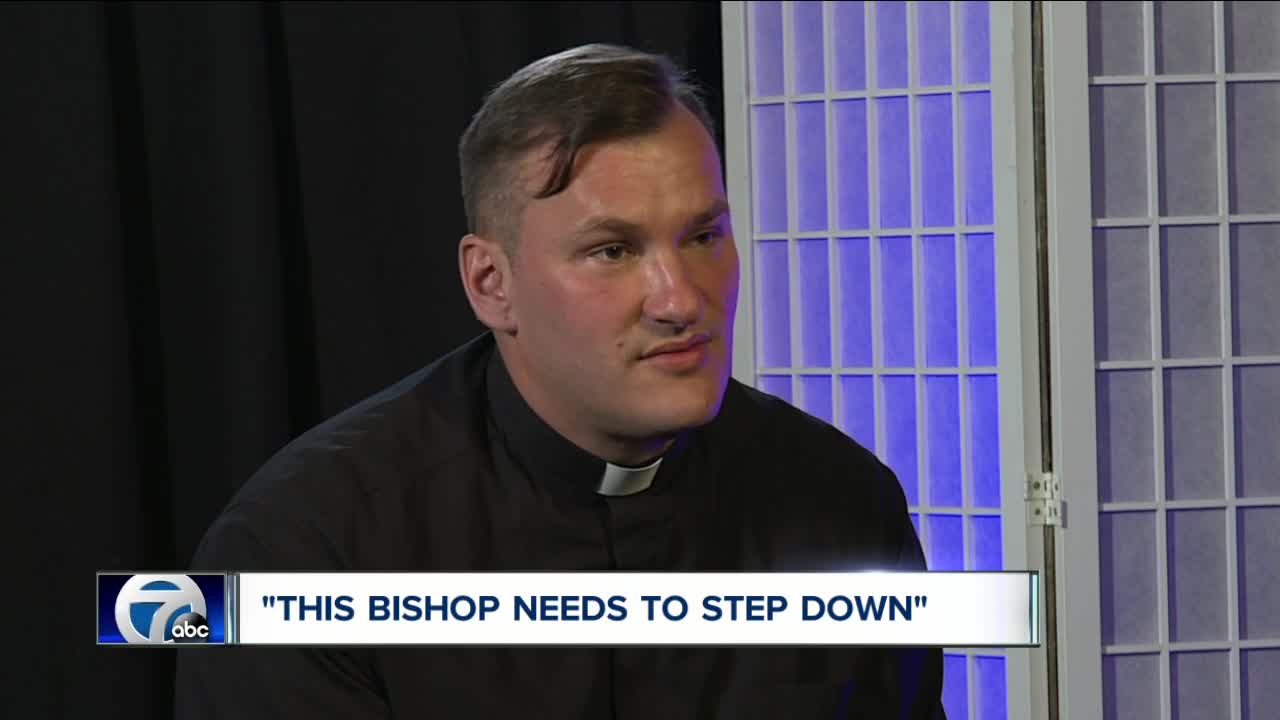 BUFFALO, N.Y. (WKBW) — Ryszard Biernat was just 23 years old when he arrived in the Diocese of Buffalo in 2003.

The future secretary to the bishop -- who has now become Whistleblower No. 2 in the diocese sex scandal -- was only a seminarian when he was assigned to stay with Rev. Art Smith at St. Thomas Aquinas Catholic Church in South Buffalo.

“During that break, Art Smith assaulted me sexually,” Fr. Ryszard said in an interview with the 7 Eyewitness News I-Team. “And I wish somebody told me it was a crime.”

With hulking forearms and a muscular build, Fr. Ryszard is normally a tower of physical strength. But in recounting that moment from 15 years ago -- when he could barely process what happened -- he struggles now to hold back tears.

“At that time, I knew enough English to order (a) latte at Starbucks, not to report the sexual assault,” he said. “You know, they don't teach you these words in English second language classes.”

The Polish immigrant would soon get an education in how the bishops of the Diocese of Buffalo handle sexual abuse.

A document Bishop Malone sent to the Vatican, and obtained by the I-Team, confirms Fr. Ryszard’s account, stating, “when Father Art was pastor in one of our city parishes, a seminarian noted that Father Art seemed to ‘groom’ him to get his affection. One night the seminarian recounted an incident where Father Art came to his room, came into his bed, and began to touch his genitalia.”

Smith, who was the subject of an I-Team investigation last year that revealed Bishop Malone returned him to ministry despite allegations of inappropriate contact with children and adults, denied by phone Thursday that he assaulted Biernat.

“That’s not true at all,” said Smith, who is currently on administrative leave while a child sex abuse claim against him is decided by the Vatican. “I know exactly what he’s talking about. All I will say is, we had a Christmas party, he had a little bit too much to drink, I admit I had a little bit too much to drink, and I told him I liked him more than he would ever know. And that was the end of it. It was nothing more.”

But it wasn’t only Fr. Art Smith’s alleged sexual assault that scarred Biernat. Worse, he said, is the way Auxiliary Bishop Edward M. Grosz handled it when he reported it to the diocese.

“He said [it] was my fault because I [didn't] lock the door,” Fr. Ryszard said of Grosz. “‘You should have locked the door. And was Father Art Smith drunk, because if he was maybe he did not know what he was doing?’”

Then, he said, Grosz issued a chilling statement.

In some ways, he said, it was worse than the assault.

“That was, that was so hurtful, so difficult,” Fr. Ryszard said. “That meeting, I thought, destroyed my life for years. It sent me into depression, into anxiety attacks. This was only my second year in a foreign country. I did not know the laws here, and I was turning to church for help. And then they re-victimized me again.”

Through a spokeswoman, bishops Malone and Grosz declined to comment for this story.

His attorney, Barry N. Covert, had another word for it: “Pure blackmail.”

“And the implication being,” Covert said, “you won't be ordained, you will be then sent back to your home country because you won't be on a student visa, you'll be taken right out of the country.”

Fr. Ryszard did get ordained and eventually became Bishop Malone’s “priest secretary” in 2013. He now wonders whether there was an ulterior motive for the choice.

“Why was Father Biernat chosen to be the secretary?” Covert asked. “Was it because they felt that they had this power over him that no matter what he heard, he couldn't disclose it, because he knew that he would be deported if he lost his job in the Catholic Church?”

Documents from the diocese’s “secret archives” obtained by the I-Team last year show Fr. Ryszard -- because of his position as vice-chancellor -- was even required to notarize documents for Bishop Malone that allowed Smith -- Fr. Ryszard’s alleged abuser -- to be placed back into ministry by Malone despite multiple allegations of misconduct.

“[It felt] horrible...horrible,” Fr. Ryszard said. “How many times have I said in the senior staff [meetings], abuse is abuse! You know, age doesn't matter.”

Fr. Ryszard said when he saw how the bishop was handling sexual harassment complaints by seminarian Matthew Bojanowski about Rev. Jeffrey Nowak, he decided to come forward because he didn’t want to see another seminarian silenced.

He became an American citizen this July, a fact not lost on Bishop Malone, who in the secret audio recordings pressures Fr. Ryszard to stay quiet about Nowak.

“Don't forget what I'm saying,” Malone told Fr. Ryszard in a recording from August. “We can't... please don't get into that on TV. I can't...you're an American citizen, you're free to do what you want.”

The statement made Covert “bolt out of my chair,” he said.

“Because I realized that that was verbal confirmation that my client was being -- directly or at a minimum indirectly -- blackmailed by the diocese to not disclose his abuse, and also not to disclose the other abuse that they gave him all the files to review,” Covert said.

The final indignity came this year, when Fr. Ryszard said a prominent Catholic wrote a letter to the Bishop’s Council of the Laity, urging the group to push the bishop for answers in Fr. Ryszard’s case, because “we cannot possibly ‘heal’ without truth.”

“Bishop Malone wanted me to call her to, to say that I'm okay, that, you know, everything is fine,” Fr. Ryszard said.