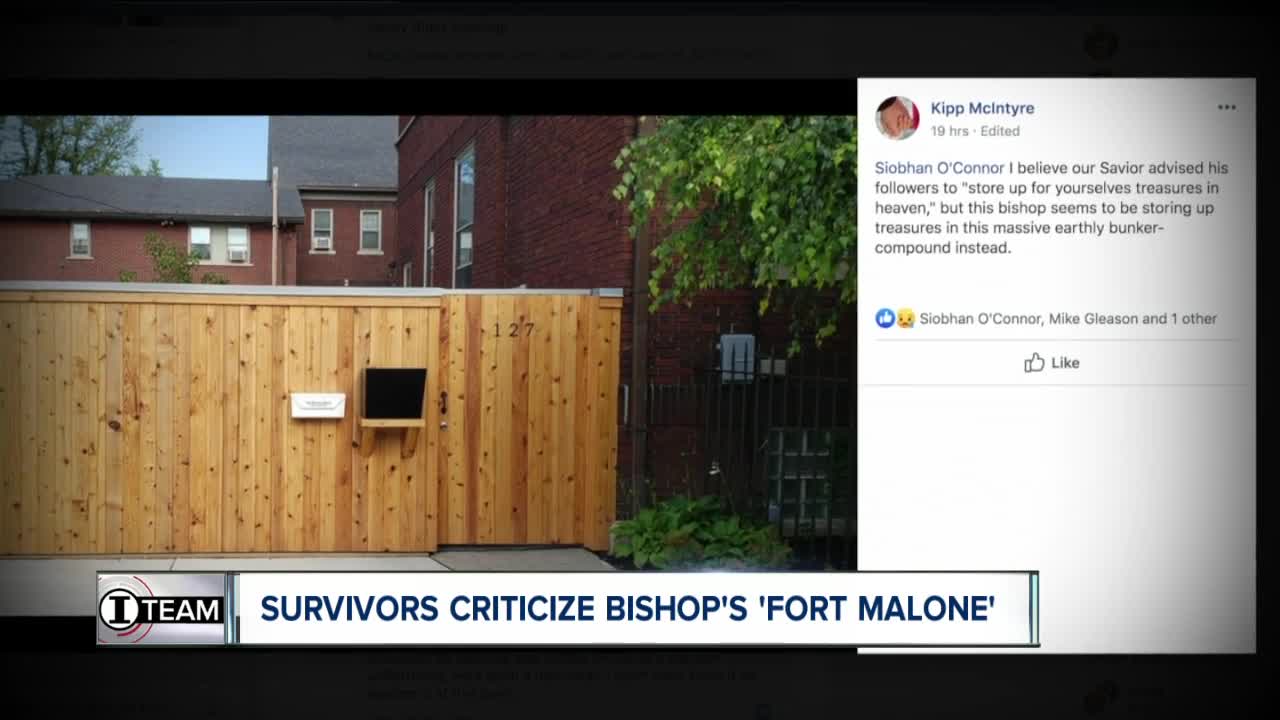 Sexual abuse survivors say Bishop Richard J. Malone is out of touch with the community. They cite a new 8-foot fence surrounding his mansion, which they have dubbed “Fort Malone”.

They cite a new 8-foot fence surrounding his mansion, which they have dubbed “Fort Malone”.

It’s a fence that, according to City of Buffalo inspectors, appears to be in violation of the city’s building code and may need to be removed -- although the diocese says it received special permission for the fence.

“To me, it felt like this was a big castle, and that the king didn't want the peasants to get too close to the building,” abuse survivor Stephanie McIntyre said of the bishop’s new fence. “If there was room for a moat...I think he would put it in.”

McIntyre -- along with her husband, Kipp -- visited the East Side mansion this weekend while they were in town meeting with other survivors.

“I think both of us were just shocked,” Kipp McIntyre said. “I've never seen anything like that. I've seen a lot of Bishop residences.”

The McIntyres also referred to an internal church budget obtained by the I-Team last year that showed Bishop Malone spent $200,000 on upgrades before moving in.

“I'm not sure what he's afraid of with putting up such a fortress to stop people from coming in,” Stephanie McIntyre added.

The 7 Eyewitness News I-Team measured the fence, which ranges from a few inches over six feet in height to a maximum or more than eight feet. A building official at City Hall on Monday said the maximum height for a fence in the city is four feet for side yards and six feet for back yards.

“A variance was given for the original fence many years ago (approximately 2008),” Kathy Spangler, the bishop’s spokeswoman, wrote in an email. “The height approved for the original fence was at eight (8) feet. The fence was in need of replacement when Bishop was preparing to move into the residence. The new fence that was installed lowered the height of the fence by one foot. This new fence sustained damages during wind storms earlier this year and they were repaired it at that time.”

Google Earth images dated last year confirm the property did previously have a dark brown fence. City officials said no permit is needed for a fence so long as it is below the maximum allowed height. But a fence exceeding that height -- in this case, six feet -- would require a permit, and the building official said he could find no permit or application for a variance on file in the city’s computer system.

In April of last year, Malone put his million-dollar Oakland Place mansion on the market to help compensate victims of sexual abuse. He said it was a chance to meet a diverse population by moving to his new residence -- a former convent -- on Wilson Street.

“It’s a good thing for me to be over there,” Malone said at the time. “New peoples (sic)...immigrants and others coming in. A lot of diversity.”

But internal emails show the bishop -- before he moved in -- complained about his friend feeling that it was located “in such a run-down neighborhood.” It’s sentiments like those that offend survivors like McIntyre.

“From what I see [from] other victims, we're all just trying to move on with our lives, but you can't move on, when, you know, a whole community is still being duped and lied to,” McIntyre said. “And it's just...it's so disgusting.”