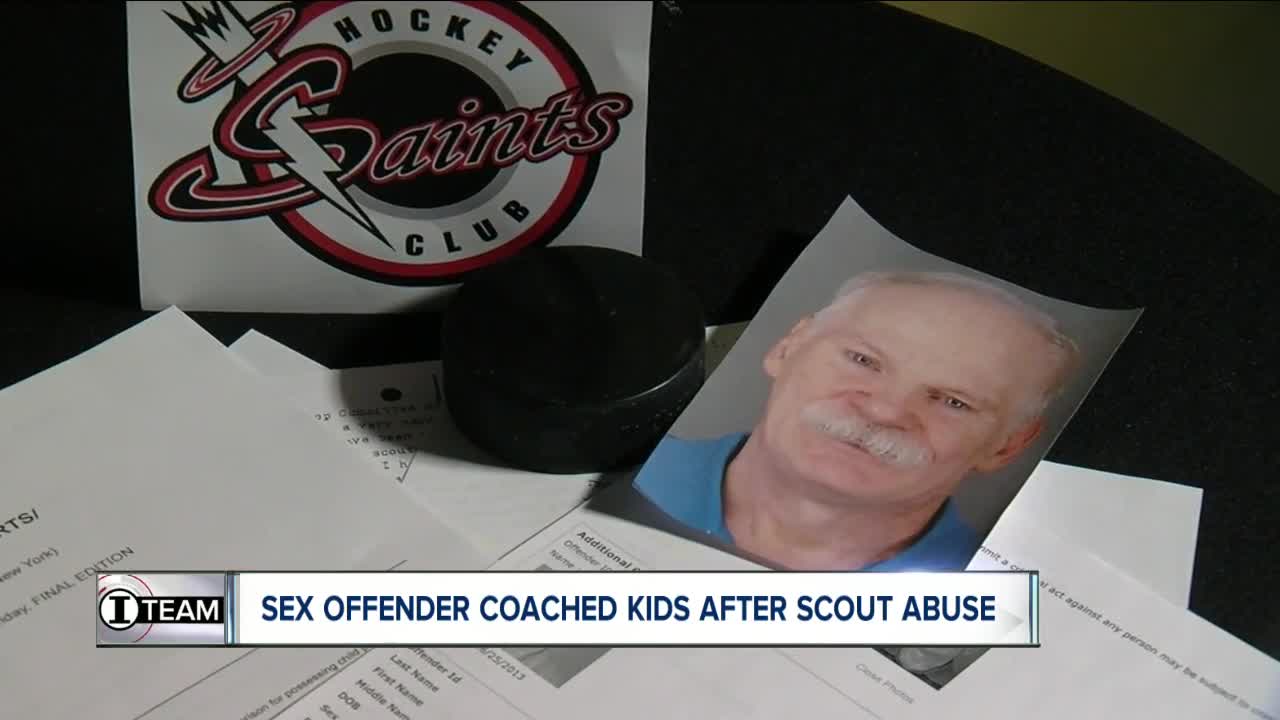 In the 1980s, the Boy Scouts discovered a dirty little secret about one of their Scoutmasters: he was an accused child molester. But because the matter was handled “internally” and not reported to law enforcement, Nail spent the next 20 years coaching youth hockey.

BUFFALO, N.Y. (WKBW) — In the 1980s, the Boy Scouts discovered a dirty little secret about one of their Scoutmasters: he was an accused child molester.

But because the matter was handled “internally” and not reported to law enforcement, Nail spent the next 20 years coaching youth hockey, where he is alleged to have struck again -- this time molesting an 8-year-old.

Those allegations against the hockey coach are included in a lawsuit filed last week in State Supreme Court alleging Nail molested a child when he was coach of the Depew Saints Hockey Club from 1985 to 1992.

The 7 Eyewitness News I-Team was able to piece together confidential records from attorneys suing the Boy Scouts of America, as well as news reports and a separate lawsuit filed under the Child Victims Act, to create a timeline of how Nail joined multiple youth organizations and allegedly molested children before he was convicted in 2004 of possessing child pornography.

1968 -- Boy Scout Troop #565 is formed at Our Lady of the Blessed Sacrament Catholic Church in Depew. Douglas W. Nail is one of its original members, he later states in a letter.

April 1, 1978 -- Nail becomes Scoutmaster, a post he will retain for the next six years.

Sept. 30, 1984 -- Committee Chairperson of Troop #565 writes in a letter that the committee was “informed by the parents of two Boy Scouts (approx. age 12) that at a recent sleepover attended by a group of young scouts at the apartment of Scoutmaster Doug Nail, it was observed by one scout and confirmed by another scout that Scoutmaster Doug Nail had...fondled one of the boys.”

“When confronted with the above fact,” the letter states, Nail “did not deny the incident took place.”

The committee chairperson states the adults on the scout committee “do not feel that he should be in direct contact with young scouts any longer” but because of Nail’s “stated willingness to go for professional assistance in sexual identity, perhaps his future activities could be channeled into such matters which involve only adults’ participation, as he has expressed a sincere desire to continue in scouting.”

Oct. 1, 1984 -- In a letter to the Troop Committee, Nail writes, “It is with great sadness that due to personal reasons, I feel that I must resign as Scoutmaster.”

But Nail hints at a possible return, stating, “I don’t want to retire completely from scouting, because I have so much to offer and because I really enjoy scouting; but I must take and put scouting on the back burner for a while...I hope you will not think to [sic] unkindly of me and some day I can come back as a committeeman or even as its Scoutmaster.”

Approx. 1985 -- Nail becomes a hockey coach for the Depew Saints Hockey Club, where he allegedly sexually assaulted an 8-year-old child. (These details emerged in a lawsuit filed under the Child Victims Act in 2020).

Dec. 2, 1988 -- Scout official from the Greater Niagara Frontier Council writes to the national scouting office in Texas, “Please be advised that the individual indicated, Douglas W. Nail, is on the ‘Confidential’ list of the Boy Scouts of America.”

Feb. 29, 1989 -- A national Boy Scout official writes to a local scout executive to say Nail’s case “has been reviewed with our attorney and is now on our permanent Confidential File.”

Jan. 2004 -- Federal authorities raid Nail’s home in Depew and charge him with possession of child pornography.

The same day he is charged, Nail is “relieved of his position” as coach of the Depew Saints ‘midget’ squad, “a house-league team for 15- and 16-year-old boys,” according to a 2004 article in The Buffalo News.

Aug. 26, 2004 -- Nail is convicted of federal child pornography charges and sentenced to 10 years in state prison.

Dec. 2, 2019 -- A plaintiff using the pseudonym LG 37 DOE files a Child Victims Act lawsuit against Nail and the Boy Scouts, alleging that from 1983-1987, Nail “sexually assaulted and committed battery upon the child at and during Boy Scout events and at other locations.”

The lawsuit states that the Boy Scouts “failed to report to the police or other governmental agencies sexual crimes” committed by Nail in Boy Scout Troop #565.

The alleged victim was approximately 11 years old at the time of the alleged abuse, according to the lawsuit.

Jan. 7, 2020 -- A plaintiff using the pseudonym LG 38 DOE files a Child Victims Act lawsuit against Nail and the Saints Hockey Club, alleging that from Jan. 1, 1985 to 1992, Nail “sexually assaulted and committed battery upon the child at his home and various hockey tournaments and events…”

The alleged victim was approximately 8 years old at the time of the alleged abuse, according to the lawsuit.

Present -- Nail, according to New York State’s sex offender registry, lives in a house on Bryant Street in Depew. He did not immediately return a message seeking comment Monday.

Click here to read the Boy Scouts' files on Nail.