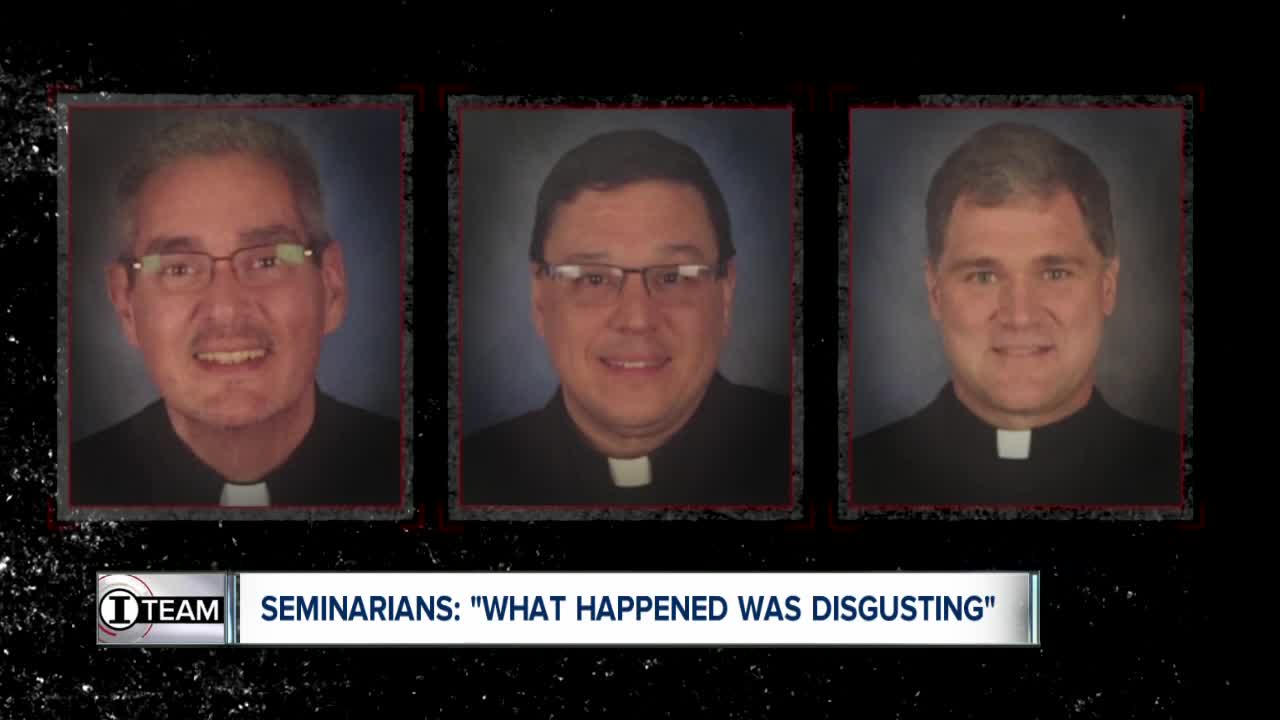 7 Eyewitness News has exclusively obtained a written account the seminarians gave to their superiors at the seminary, and many of the graphic details are even too sexually explicit to air on television. 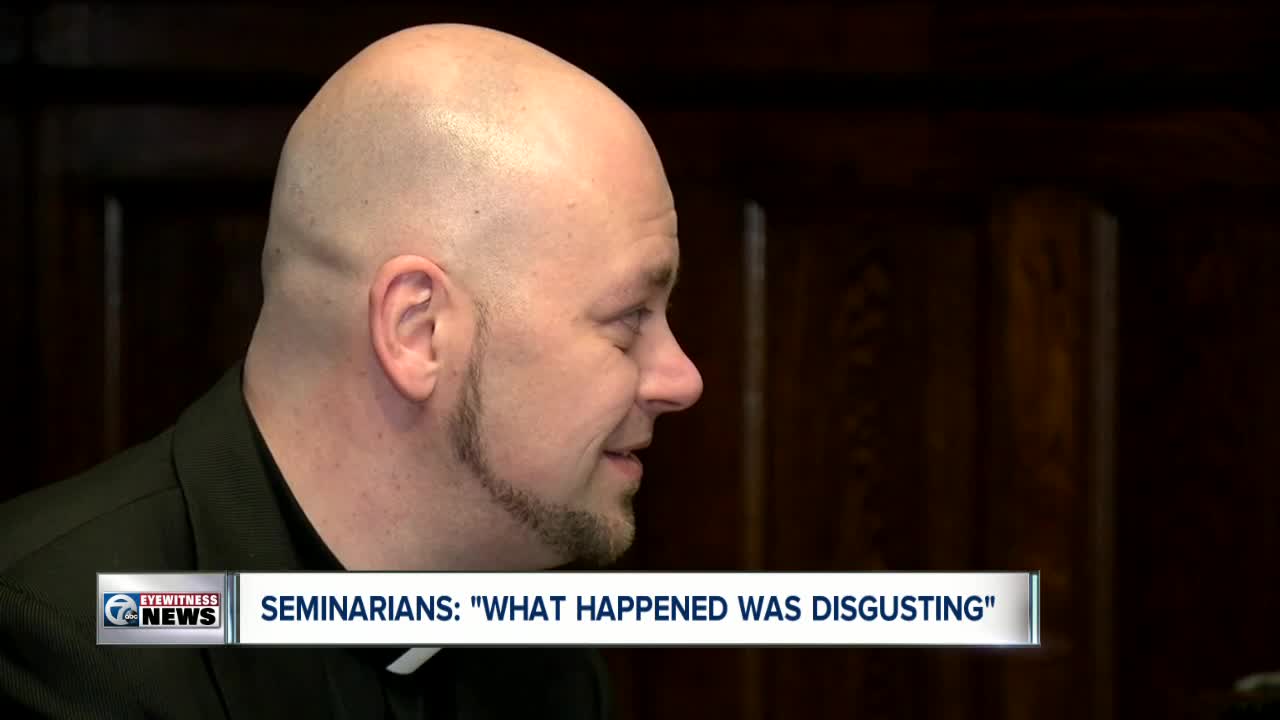 BUFFALO, N.Y. (WKBW) — The Diocese of Buffalo suspended three Hamburg priests last week for what it called “unsuitable, inappropriate and insensitive conversations” during a party with seminarians at a church rectory.

Diocesan leaders gave no details about what the priests actually said, leading to widespread speculation and criticism from parishioners and other priests.

But 7 Eyewitness News has exclusively obtained a written account the seminarians gave to their superiors at the seminary, and many of the graphic details are even too sexually explicit to air on television.

“These guys are terribly corrupt,” said one employee of the seminary, who spoke to 7 Eyewitness News. “What happened was disgusting. Absolutely repulsive." The employee asked not to be identified for fear of retribution.

According to the document, Rev. Art Mattulke of SS. Peter and Paul Church in Hamburg -- told one seminarian he heard the young man's parents having sex on a retreat, going into detail about how the “father was really giving it to his mother.”

Mattulke “is a designated spiritual director appointed by Christ the King Seminary for seminarians,” the document states. “Several seminarians expressed concerns about this.”

Other conversations involving the three suspended priests -- Mattulke, Rev. Bob Orlowski and Rev. Patrick O'Keefe -- reportedly included talk of "a priest who taught at the seminary and used to go to truck stops to give oral sex."

The priest allegedly compared the sexual acts to a Catholic sacrament.

The three suspended priests did not respond to multiple requests for comment.

In another case, the document -- which was independently confirmed as authentic by an employee of the seminary -- states Mattulke and Orlowski talked by phone with a female dentist from out of state in front of the seminarians, before they “surveyed the room of seminarians and called our gathering a sausage fest and said that the (female) dentist wants to f--- a seminarian. Rev. Bob Orlowski asked the dentist, “Yeah, you want to f--- one of them?”

7 Eyewitness News has also learned that two other Buffalo Diocese priests -- Rev. Bryan Zielenieski and Rev. Cole Webster -- also attended the party and have since been reprimanded by the diocese for not doing more to stop the conversations.

Zielenieski -- the pastor of Our Lady of Charity Parish in South Buffalo -- and Webster, who is assigned to SS. Peter and Paul in Hamburg, said in interviews with 7 Eyewitness News that they were unfairly treated by the diocese and did not get to tell their sides of the story.

“My feel of the event is that it was a nice gathering,” said Zielenieski, who is also canonical administrator of Notre Dame Academy elementary school in South Buffalo. “I thought there was good conversation that took place. There was some real conversation and it was...overall good.”

“That report says that they felt forced to stay and fed drinks,” Webster said. “That was not the case.”

The following is a transcript of the interview with 7 Eyewitness News:

REPORTER: “Are you saying that this stuff was OK or that you didn't hear it? How did you interpret it when you were shown or read this document?”

ZIELENIESKI: “The aspects of it, no I did not hear, because you're in different areas of the room. When you are gathered together in a relaxed atmosphere and you start to really get into the nitty gritty of ministry, you start to really try to be real, you do let your guard down a little bit. I'm not saying that everything is a holy dialogue, but I'm saying you have real conversations and some of it can get into real specifics and, you know, we have to work on that.”

REPORTER: “Do you think it's appropriate for a person, a priest, to be talking about this kind of stuff?”

WEBSTER: “Having read the report...which I preached this past weekend, I denied ever hearing. And some of it, I just don't even understand how they interpreted things that are in there.”

REPORTER: “You're not saying that this stuff is OK, what was said in here? That it's appropriate?”

WEBSTER: “No, and what I've said in my own investigation is that it was false, some of it is false.”

REPORTER: “There's gonna be people out there who are gonna look at this and say, jeez, what kind of stuff is happening on our seminary in this diocese? What would you say to that?”

ZIELENIESKI: “Formation...that's what's happening in our seminary in our diocese. The seminary has a task, and it's a difficult task. It's a task of taking men who have responded to the call and helping them to discern how is that Holy Spirit bringing them to the point of ordination.”

However, the employee of the seminary said there is a clear divide among seminarians who feel -- especially in light of state sexual harassment laws -- compelled to speak up about such conversations, and some older priests who are used to the stories.

“We’re starting to have good guys joining the seminary that are not like this,” the employee said. “You have all these guys entering for the right reasons and you have all these other guys essentially imposing their will on them.”

Rev. John Staak, interim president-rector of the seminary, declined a request for an interview.

A spokeswoman for Bishop Richard Malone responded to criticism that he suspended the priests by phone from his vacation home in Cape Cod, Mass., and that he has remained there while the Hamburg parish endures the turmoil.

“Bishop Malone was fully involved in every conversation and decision that was made at the Diocese and Seminary,” spokeswoman Kathy Spangler said. “As regards the three priests, there is no timetable. After a temporary leave of absence from their parishes and appropriate action, we hope they will return to active ministry. In regard to time away, every priest, by canon law, is afforded personal time away. It has been Bishop Malone’s custom, for many years, to take some time immediately after Easter. While away, he is in regular contact, multiple times a day, with the diocese.”

Clarification:
After this story was published, Buffalo Diocese spokeswoman Kathy Spangler clarified in an email that Bishop Malone “never has and never will place any priests on leave by phone, including those recently placed on a temporary leave of absence.” Instead, she said, Bishop Malone asked Auxiliary Bishop Edward M. Grosz to “communicate it in person to the priests.” When asked, she did not specify how Bishop Malone communicated that message -- by phone or by email -- from his vacation home in Cape Cod, Mass.

“The key is that we would never communicate suspension or admin leave by phone, but always in a face to face conversation,” Spangler wrote in an email. “The decision is always made collegially, not by Bishop [sic] in an isolated way.”