RICO lawsuit alleges 'racketeering enterprise' by the Diocese of Buffalo 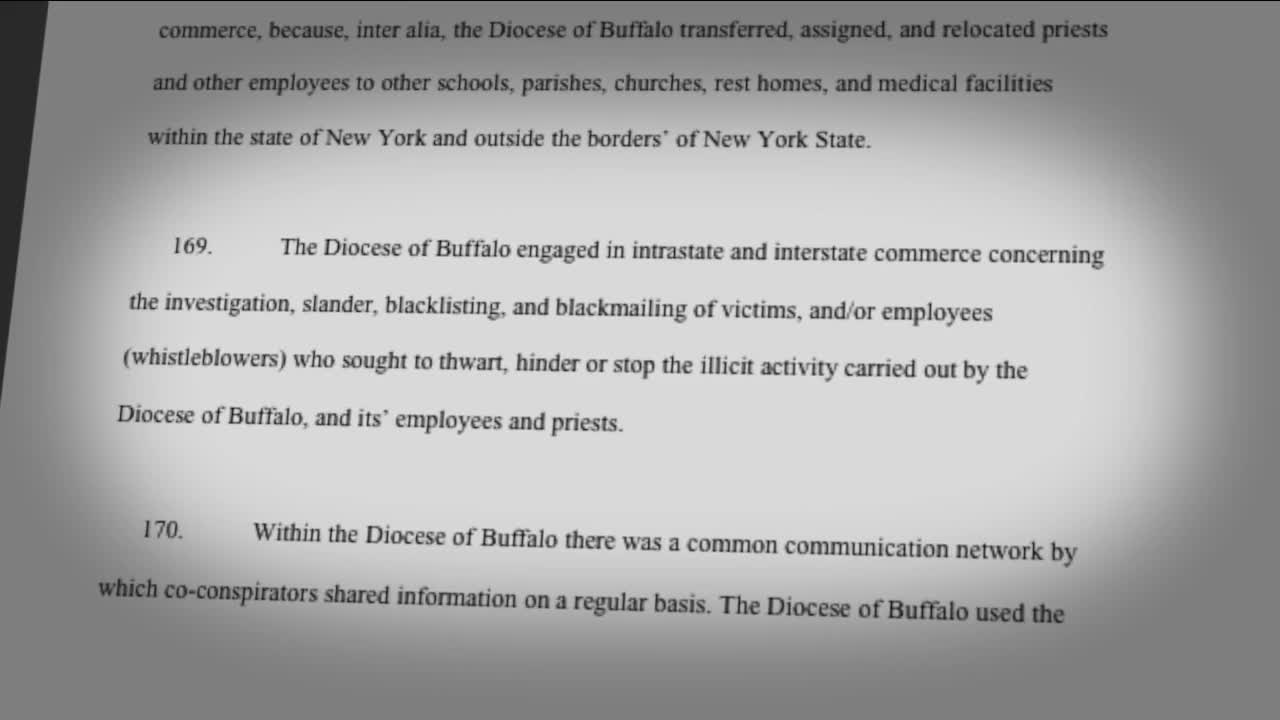 A civil lawsuit filed in state court by a Tonawanda attorney alleges a 'racketeering enterprise' by the Diocese of Buffalo.

BUFFALO, N.Y. (WKBW) — A civil lawsuit filed in state court by a Tonawanda attorney alleges a 'racketeering enterprise' by the Diocese of Buffalo.

"They allowed it to keep continuing, and other children were victimized," said attorney Kevin Stocker, who filed the lawsuit. "Why? To protect their brand and protect their assets. They turned and looked the other way."

Attorney Kevin Stocker filed the lawsuit Wednesday under New York State's new Child Victims Act, but unlike most of the more than 100 suits targeting the Diocese of Buffalo, the suit goes beyond allegations of child sex abuse and cover-up.

The suit -- which is civil, not criminal -- references the Racketeers Influenced and Corrupt Organizations Act, commonly known as RICO, which is a statute designed to target organized crime.

The suit has 23 plaintiffs and focuses on “payments to the law firms and accountants to perform their roles in concealing the misconduct” by the diocese.

"In order to conduct these activities, you need professionals to advise and organize and carry [it] out," Stocker said. "But it appears that it was a very sophisticated, well-financed organization and a well-thought strategy on how to transfer funds and hide funds."

It names multiple priests and diocesan officials -- as well as Bishop Richard J. Malone and retired Bishop Edward U. Kmiec -- and alleges diocesan officials “associated together for the common purpose of harassing, threatening, extorting, and misleading victims’ [sic] of sexual abuse committed by priests; and misleading the priests’ victims and the media to prevent” it from becoming public.

The suit also states two whistleblowers came forward to report “wrongful conduct” by clergy -- specifically Rev. David Bialkowski -- and were “terminated” by the diocese as a result.

Stocker acknowledged how unprecedented it was for someone to use the RICO cause of action -- originally designed to target the Mafia -- to go after the Catholic Church in Western New York.

"When you take a step back and you see how long it's gone...how many people are involved, and the extent of it, and how many kids were hurt... it's shocking, at least how I was raised in the Catholic Church, to compare one versus the other," Stocker said. "But we're here. How can you say it's any different? In my opinion, it's the same. It's an organization filled with criminal activity, making money. It's the same thing."

Stocker said he was even more disturbed when a diocesan employee sent him an internal email -- dated for September -- which described a document shredding event at the diocese for “confidential items.”

A spokeswoman for Bishop Richard J. Malone issued this statement about the shredding event:
"Thank you for you inquiry. The shredding referenced in the document you sent actually never occurred, it was postponed and to date has not taken place. In the past, when shredding has been done it includes what is common practice in businesses elsewhere. Examples of shredded information are: check requests, old credit card information and statements, old resumes, old invoices, bills, receipts, photo IDs, old bank statements, voided checks, employee pay stubs, documents containing sensitive information such as name, address, phone number or email. I learned fromthose that oversee this process that nothing has ever been given to them from the Chancery."

A spokeswoman for Bishop Richard J. Malone also issued this statement:
"The Diocese has received a document from the media which is filled with procedural deficiencies and irresponsible claims against parties, some unnamed, who have no connection to the Child Victims Act. If the claim is pursued, the Diocese and all related entities will respond appropriately."

Diocesan attorneys Terry Connors and Lawlor Quinlan did not respond to a request for an interview.

Stocker said as a Catholic, he takes no pleasure in filing the lawsuit against his own church. But he said he believes it has become a necessity.

"It's something our family has believed in, and to see how an organization turns their back on children, lets them be victimized and destroy their family and destroy their lives...And to see face to face these people and how it's affected them...It's truly disturbing and sad," he said. "It really is."