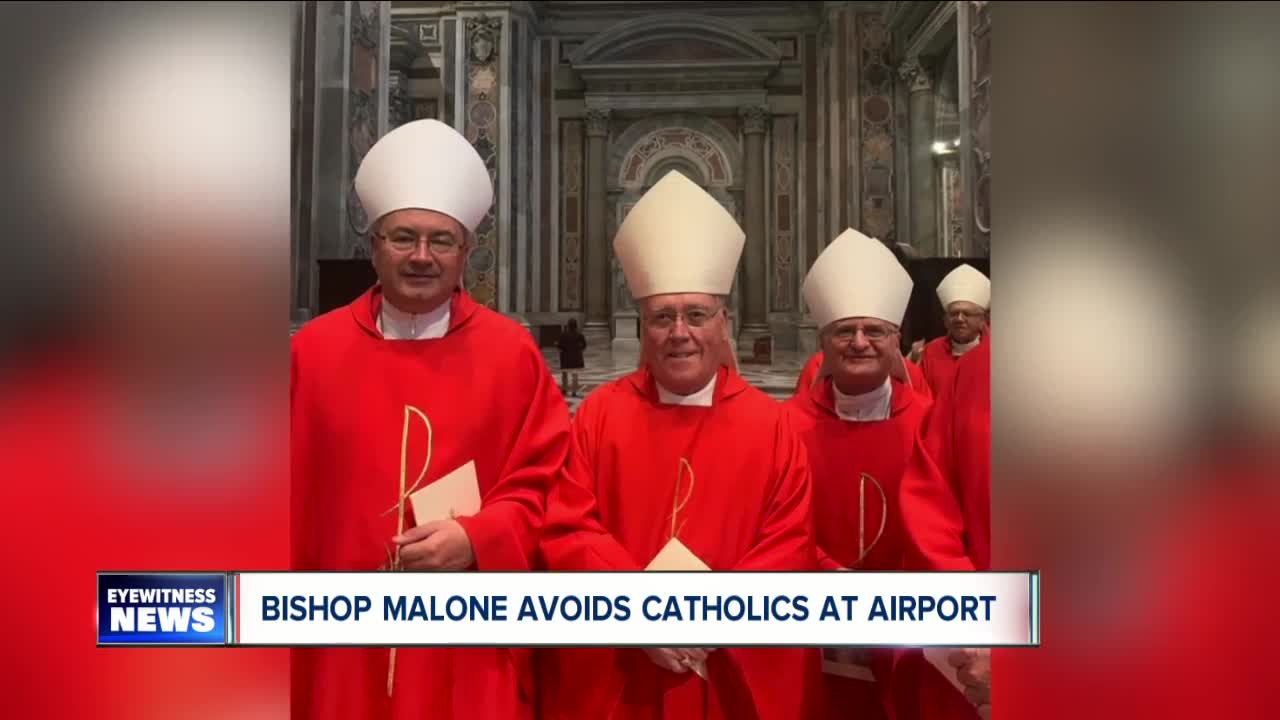 Bishop Richard J. Malone on Sunday flew back from the Vatican, but the embattled bishop ducked out a side entrance of Buffalo Niagara International Airport before a dozen parishioners had a chance to greet him.

BUFFALO, N.Y. (WKBW) — Bishop Richard J. Malone on Sunday flew back from the Vatican, where he met with Pope Francis and where rumors swirled about his possible resignation.

But the embattled bishop, whose handling of sexual abuse claims has led to investigations by the FBI, the State Attorney General’s Office and the Vatican, ducked out a side exit of Buffalo Niagara International Airport before a dozen parishioners had a chance to greet him.

His escape from the airport, which appeared to be aided by the Niagara Frontier Transportation Authority, may have been due to the fact that the welcoming party was not very welcoming.

“Bishop Malone Must Go,” read multiple signs held by Catholics standing in the entrance to the airport terminal.

About a dozen reporters stood waiting for the controversial prelate to answer questions about whether Pope Francis asked him to resign, or whether he was fired after meeting with the Holy Father, who has directed a wholesale investigation of Malone’s management of the Diocese of Buffalo.

The Vatican gave no public indication over the weekend that Malone’s resignation after 20 months of tumult and multiple scandals regarding his handling of sexual abuse was imminent, as was reported last week by a Rome-based correspondent.

Rome’s status quo, coupled with Malone’s continued avoidance of public appearances, left the dozen Catholics who gave up their Sunday nights to send him a message at the airport exasperated.

"We were planning to be entirely peaceful and respectful, and if he can't even stand to see us, that really says a lot about him, and that's really pathetic," said Siobhan O'Connor, Malone's former secretary who quit her job last year and divulged hundreds of secret records that showed Malone allowed multiple priests to minister despite allegations of sexual misconduct.

Dennis Farrell, a lifelong Catholic from South Buffalo said Malone "has definitely let us down one time after another."

"We thought he'd be here tonight to answer some questions," Farrell said. "It's just very disappointing."

Malone was on a flight from Rome to Buffalo, with a layover in Washington, D.C. His plane landed just before 7 p.m. Passengers exiting the plane told reporters they saw officials escorting the bishop out a side entrance, and soon after an NFTA Transit Police officer approached reporters and said the bishop “has left the property” and that they could, too.

The transit police officer did not respond to questions about why a public authority was in the business of protecting a bishop from reporters and from his own parishioners, who called their gathering a “peaceful protest” and who said they had no plans to do anything but hold signs while Malone walked past.

"We weren't planning on saying anything at all," said Mary Ellen Sanfillippo, a Catholic from St. Mary's of Swormville. "He won't stand there and have a conversation one-on-one with us. He snuck away from us."

But NFTA spokeswoman Helen Tederous said in a written statement, "As a matter of security and safety to our traveling public, measures were taken that are routine and common for high profile travelers. When there is the potential for a security issue at the airport, it is in the best interest of the public to do everything possible to avoid risk and or threats, especially during the busy travel times."