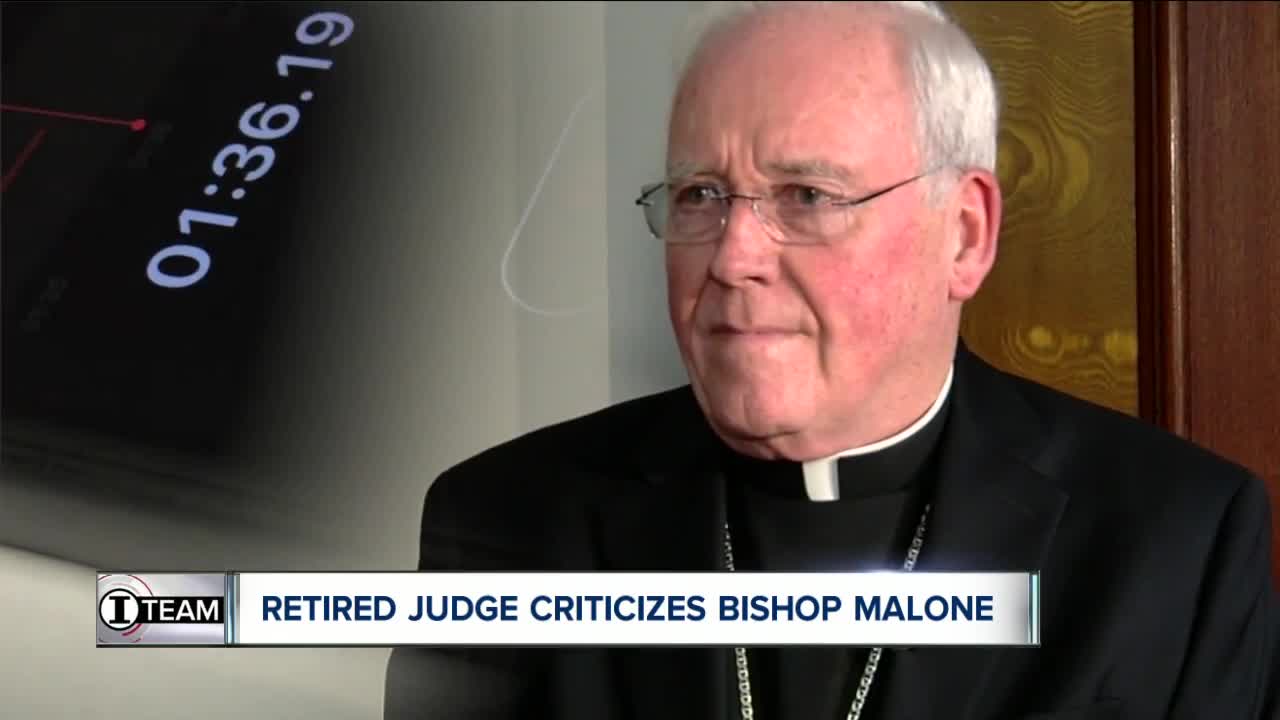 BUFFALO, N.Y. (WKBW) — Buffalo Bishop Richard J. Malone is on his way to Rome for a face-to-face meeting with Pope Francis.

It’s part of a regular visit to the Vatican by New York State’s Catholic bishops, but this time the visit comes on the heels of a massive sexual abuse scandal exposed in part by the 7 Eyewitness News I-Team over the last two years.

Now, a state judge is taking the rare step of speaking out against a sitting bishop.

“He goes on and it's like an actor on the stage,” retired State Supreme Court Justice Timothy Drury said in a recent interview, speaking about Bishop Malone. “He's got his crook. He's got his mitre. And there he is, on the stage again, thinking he can do this.”

Drury is an influential member of Western New York’s legal community, with more than three decades on the bench. He’s also a lifelong Catholic who values his faith.

“Our religion takes us through the various stages in our life,” Drury said. “And it's an absolute strength to have it. And it's got to be sustained, at least I believe so.”

As for the leaders of the Diocese of Buffalo?

“We need good leadership,” Drury said. “We need strong leadership. We're not getting it from this bishop.”

That’s why after watching damaging sex abuse revelations trickle out of the diocese over the past two years, the judge — like nearly 86 percent of Catholics in a recent Buffalo News poll — said it’s time for Malone to move on.

“He was heard to say that if he ever finds that he’s not being supported by the majority of his parishioners, he'd leave,” Drury said of Malone. “What about 86 percent!”

It’s rare even for retired judges to comment publicly on civic issues. But 7 Eyewitness News’ broadcasting of “The Malone Recordings” in September moved Drury to pen a letter to his bishop, asking him to step down for the good of the church.

“He's concerned about himself,” Drury said after listening to the recordings. “He's not leading the flock.”

Drury also faulted the bishop for his handling of two sexual abuse cases highlighted in separate 7 Eyewitness News investigations last year: the returning of Fr. Art Smith to ministry despite allegations of inappropriate contact with a minor, and the bishop’s decision to allow Fr. Robert Yetter to remain in ministry despite multiple sexual misconduct allegations against adult parishioners.

“I didn't want to reveal it to the parishioners because it was an adult,” Drury said, citing Malone’s reason for not disclosing the allegations publicly. “What are you...? What is...what a lawyer-like definition that is.”

Drury said he suspects pride is the only thing stopping Malone from resigning, despite repeated calls from Catholics to do so amid ongoing state, federal and Vatican investigations into the diocese. Kathy Spangler, spokeswoman for the bishop, said in an email, "We respect Judge Drury’s right to express his opinion."

“He's a beaten-down fellow that has risen to the top, as far as he can reasonably go in the hierarchy, and he's not going to give it up,” Drury said of Malone. “And that's the shame of it. The shepherd gives himself to the flock, lays down his life for the flock, not the other way around.”

The Christ-like move, Drury said, would be for Malone to sacrifice himself for the healing of the diocese. He said had the bishop made the right choices, two of his closest secretaries — Siobhan O’Connor and Fr. Ryszard Biernat — wouldn’t have resigned and blown the whistle in protest.

“And they did, because he just wasn't being in control,” Drury said. “And he wasn't being you know, honest about what was going on. And then he’s still there, for God's sakes! Wandering around the diocese, pretending to be a bishop in control. He's not.”