I-TEAM: Is the Diocese of Buffalo hiding money ahead of bankruptcy? 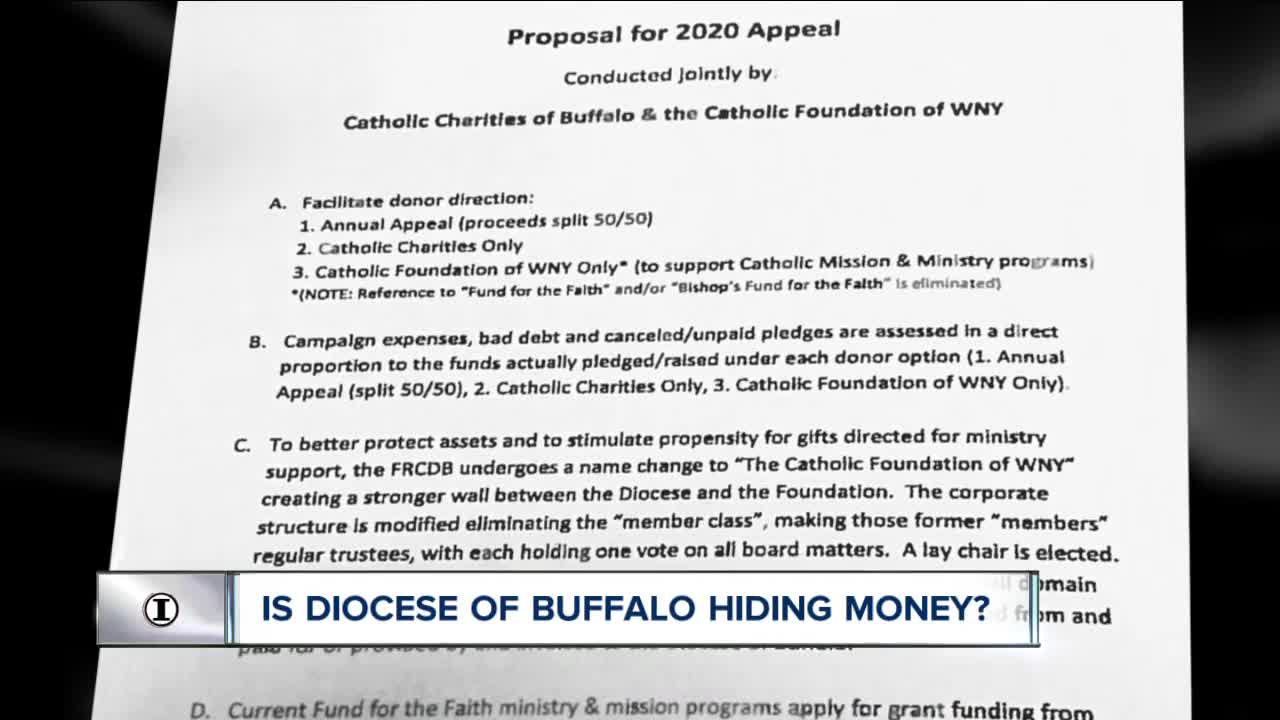 The 7 Eyewitness News I-Team has obtained a secret document that is raising questions about whether the Diocese of Buffalo is hiding or diverting money in anticipation of abuse lawsuits and bankruptcy.

BUFFALO, N.Y. (WKBW) — The 7 Eyewitness News I-Team has obtained a secret document that is raising questions about whether the Diocese of Buffalo is hiding or diverting money in anticipation of abuse lawsuits and bankruptcy.

The document -- presented at a recent Catholic Charities meeting -- is a plan for the organization’s 2020 Appeal, which would be conducted jointly with the Foundation of the Roman Catholic Diocese of Buffalo. The document was presented by Rick Suchan, director of the foundation.

“It reminds me of a New York City shell game where they move stuff around, call it different names, funnel money, and you don't know where it is,” said attorney Kevin T. Stocker, who has filed a civil RICO lawsuit against the diocese.

Under current practice, Bishop Richard J. Malone said in secret audio recordings that about 40 percent of funds donated to Catholic Charities are traditionally sent to "The Bishop's Fund for the Faith," which is part of the general diocesan budget. (The diocese gave Catholic Charities donors the option to opt out of that funding route for the first time this year).

Under the new plan, that money would instead go to the diocesan foundation, which -- although its trustees include Bishop Malone and others with connections to the diocese -- is technically a separate corporate entity and not as vulnerable to payments which might result from bankruptcy proceedings or the 152 Child Victims Act lawsuits filed against the diocese.

The @WKBW I-Team has obtained a secret document presented at a recent Catholic Charities board meeting that is raising questions about whether the @BuffaloDiocese is hiding/diverting $$ in anticipation of lawsuits and bankruptcy. Watch @WKBW at 6 p.m. for the full story. pic.twitter.com/IV35wY5f0H

"To better protect assets and to stimulate propensity for gifts directed for ministry support, the FRCDB undergoes a name change to ‘The Catholic Foundation of WNY’ creating a stronger wall between the Diocese and the Foundation,” the document states.

“They're covering things up, calling it different names, sliding money over here, under a different name -- and they're not being truthful with anybody,” said Stocker, whose civil lawsuit accuses the diocese of “hiding assets” through other corporate entities and uses the term “piercing the corporate veil.”

Secret recordings show that in a recent meeting, Bishop Malone and his advisers talk about consulting with a lawyer to change the bylaws of Catholic Charities -- and they're particularly worried about suits like Stocker’s.

“A concern about any lawsuit piercing the corporate veil…” vicar general Rev. Peter Karalus stated. “...Do the bylaws look as if this is really just another sub-organization of the diocese because of who makes up the members?”

The foundation also states that references to "Bishop's Fund for the Faith" would be eliminated, and the foundation, which is headquartered at the diocese, would "establish its own corporate address and email domain."

When the diocese wanted access to the money it formerly received as part of its general budget, it would "apply for grant funding" from the foundation, which would also "invoice the Diocese of Buffalo,” the document states.

Rose Caldwell, a spokeswoman for Catholic Charities of Buffalo, said in an email that the document was only “a discussion guide, a draft proposal.”

“It was not presented to the full Catholic Charities Board of Trustees, and the small committee with which it was shared rejected it for any further discussion or consideration,” Caldwell wrote.

Kathy Spangler, spokeswoman for Bishop Malone, and Suchan, of the foundation, did not respond to interview requests.

While Stocker said the diocese appears to be “playing games,” he warned that financial plans such as these could get the diocese in trouble with a bankruptcy judge, or even the State Attorney General’s Office, which is investigating the diocese.

“Because if they go forward and they misrepresent it's criminal,” Stocker said. “You can't start hiding money off to the side and transferring it around, calling it different things. It's a lie or a fraud you're trying to perpetrate on the court, and the courts -- they have problems with that.”