No progress on Buffalo Billion development 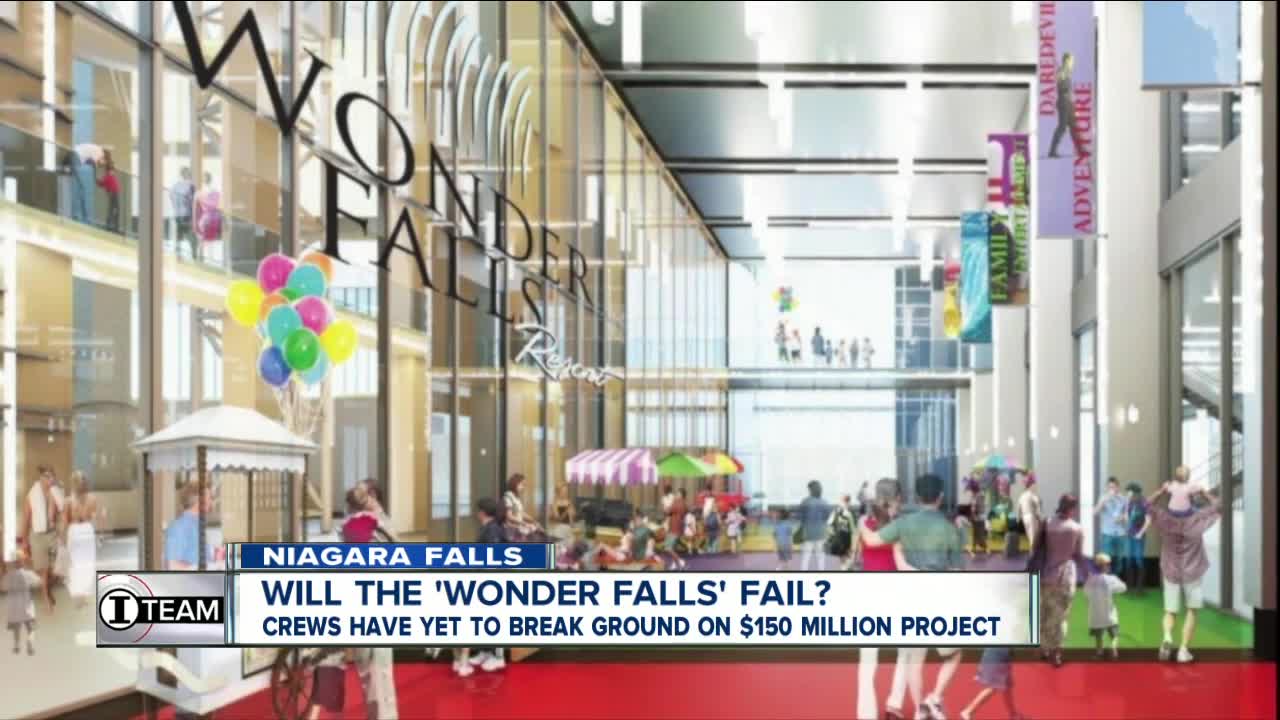 NIAGARA FALLS, N.Y. (WKBW) — It was supposed to be a key catalyst for boosting tourism in Niagara Falls.

But five years after Gov. Andrew Cuomo announced the $150 million project -- and two years after it was supposed to be finished -- the Wonder Falls development exists only as an artist’s rendering on the Buffalo Billion website.

Construction workers have not even put a shovel into the ground. And if the developer isn’t able to work out some unexpected financing issues, there’s a chance they never will.

“I’ve seen this so many times here in the Falls,” said Ron Anderluh, a community activist. “That project should have been up and built and going by now.”

State and city officials announced the project with great fanfare in August 2014.

Coming off the excitement of the recently completed Niagara Falls Culinary Institute, they saw Wonder Falls as an ambitious development that would occupy the remaining 200,000 square feet of vacant space inside the former Rainbow Centre Mall.

That would mean the 8 million tourists who come to the Falls each year would encounter a “world-class” hotel tower with rooftop dining. Plans even incorporated an indoor waterpark and the Daredevil Adventure Center, a nod to the wildly popular tightrope walk by Nik Wallenda in 2012.

The governor may be half right. On a recent Tuesday afternoon, families walked up and down Old Falls Street on their way to Niagara Falls State Park. There are more food stands and trinket shops than there were a few years ago. And new waterfront hotels have popped up as the state demolishes the Robert Moses Parkway.

But ask people about Wonder Falls, and talk turns cynical.

“You mean the thing that was supposed to be built five years ago?” one hotel worker asked.

State officials originally said they would break ground in 2015 and the gleaming tower would be complete by 2017.

Now, both Empire State Development - which is helping to finance the project - and Uniland Development - the chosen developer - say money problems have brought to a halt what little progress had been made.

“ESD and Uniland are discussing the structure of the state assistance that has been previously allocated for this public private partnership; Uniland is currently working through these,” Pamm Lent, a state spokeswoman, said in an email. “We are awaiting Uniland’s updated milestone schedule.”

Uniland, on the other hand, pointed to President Trump’s tax cuts as something that ironically makes it harder for the developer to complete the project.

“We moved forward with Wonder Falls with the expectation that the full amount of the assistance would be used toward capital costs,” Uniland spokesman Ezra N. Rich said in a prepared statement. “Due to the 2018 Tax Reform Bill, all assistance is recognized as income and therefore is subject to federal income tax. This has a very significant financial impact on the project. We are working on strategies to mitigate the effect of this issue. We understand more than anyone how long this process is taking and we are committed to seeing it through.” Click here to read the full statement.

Both spokespeople declined requests for on-camera interviews with 7 Eyewitness News. The state spokeswoman, when asked how much of the $150 million project would be funded with public subsidies, said that still has not been determined.

‘Everything moves so slow’

“The plan, the renderings, the idea… it’s all fabulous, and it would be a great addition to downtown,” said attorney Robert M. Restaino.

Many believe Restaino is poised to become the next Mayor of Niagara Falls. The former judge recently won the Democratic mayoral primary, according to unofficial results. He faces a Republican opponent in November but political observers predict a victory for Restaino in the heavily Democratic city, which he acknowledged has had a reputation for failed developments and brutal politics.

“There’s a difficulty working with other… levels of government. Whether it’s politics, whether it’s other personality issues,” Restaino said. “I think we have to stop looking at things in that direction. I think we need to start looking at how we grow things in the city.”

He was answering a question about the Hyatt Place hotel on Rainbow Boulevard, a $35 million project that began in 2011 and was soon mired in controversy. It became an election-year flashpoint in 2013 and looked to be dead until Cuomo intervened at the last-minute to work out a deal.

Preceding that project was the Aquafalls underground aquarium -- which languished as a hole in the ground until the project was finally abandoned in the mid-2000s.

The greatest promises were made by Niagara Falls Redevelopment, a company owned by Manhattan billionaire Howard Milstein that promised to make Niagara Falls a ‘Disney World of the North.’

Twenty-one years later, most of the 200 downtown acres owned by Milstein sit vacant.

Anderluh, a downtown resident who has spent decades speaking at City Council meetings and advocating for the development of downtown storefronts, still holds out hope that Wonder Falls will become more than just another failed promise.

“We have had this happen so many times here in the Falls,” Anderluh said. “People have promised us stuff and we never see it. Let’s do something. Let’s break ground, push some dirt around, and make sure it happens.”