With real estate booming, some neighborhoods feel left behind 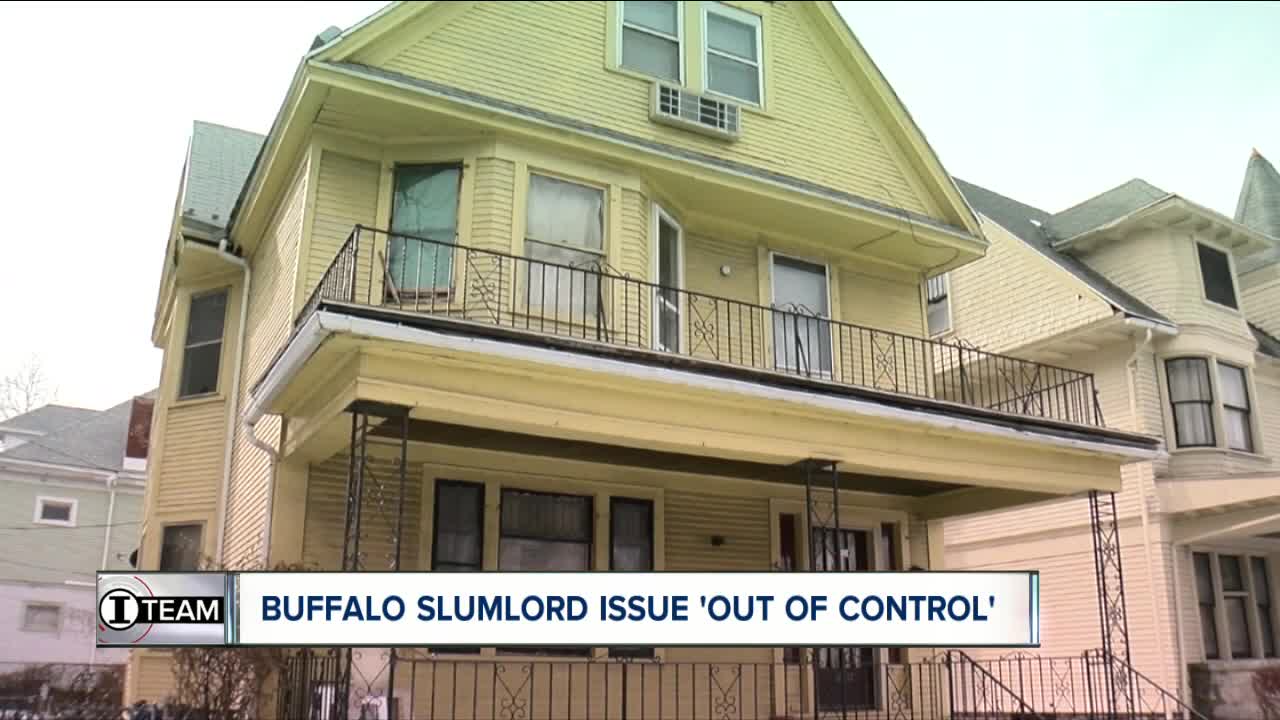 As the housing market in Buffalo has boomed, more landlords are buying properties as investments but doing little work to maintain them. 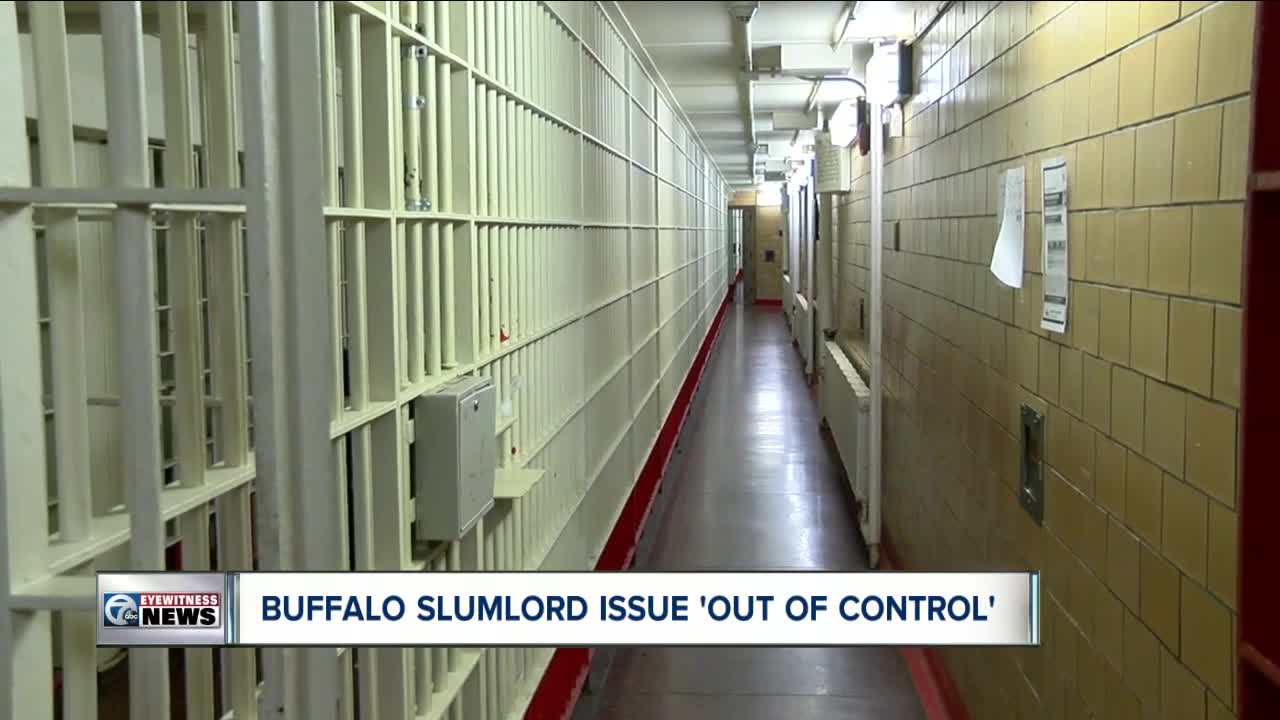 BUFFALO, N.Y. (WKBW) — Follow Nate Boyd on Facebook and you’ll see the ugly side of apartment living in Buffalo.

There he is in a Buffalo housing project, holding the tail of a dead rat that looks more like a small cat.

“Look how big this rat is!” he yells into the camera.

Another day, he’s just over the city line in Cheektowaga, where a woman’s ceiling has collapsed and water is pouring down from the lighting fixture.

“You see what I’m going through?” the woman said as she began to cry.

Boyd takes pleasure in showing live footage of the “other Buffalo,” the one the politicians don’t talk about at news conferences. The one you can barely see from the lofts that tower over downtown.

“The slumlord issue is out of control,” Boyd said in an interview with 7 Eyewitness News. “The people have had enough.”

As the housing market in Buffalo has boomed, more landlords are buying properties as investments but doing little work to maintain them, Boyd and other neighborhood activists say. City leaders say they have the problem under control, but records obtained by 7 Eyewitness News show it continues to plague both the east and west sides of Buffalo.

On East Side, a house 'infested'

Holes and cracks have allowed mice to climb to the second floor of her apartment in an old home on Humboldt Parkway.

From her front porch, you can hear the traffic from the Kensington Expressway. At night, she says, she hears the tap-tap-tapping of mice scurrying on the cracked ceiling above and the hardwood floor below.

She bought sticky traps for her kitchen and quickly caught three of them. She found another with an oversized tail running across her dining room floor. A third -- this one obviously well-fed -- was nestled in her 1-year-old son’s play mat.

She pays $950 per month to her landlord and is bound by her one-year-lease. (After the 7 Eyewitness News I-Team began reporting this story, the landlord agreed to let Anderson out of her lease and return her security deposit.)

“They claim all the time that they’re going to get an exterminator,” Anderson said. “But they didn’t do it yet.”

Public records show the landlord lives in the Syracuse area. When reached by phone, a man who takes care of the properties for the landlord -- he would not give his full name -- said he was in the process of getting exterminators to the property.

“We’re going to address it,” he said.

More than 60 percent of Buffalonians depend on a landlord to keep up their homes, according to U.S. Census data provided by the city. That amounts to 64,000 rental units in the Queen City.

City data shows a cluster of housing violations on the city’s east and west sides, but Lou Petrucci, director of permits and inspections for the city, said that may be changing.

“Particularly on the West Side, what we’re seeing is a record number of permits this year, and with the permits that means that someone has invested in the property and they’re making some type of renovation and repairs,” Petrucci said.

Patty MacDonald has heard promises like that for a long time.

MacDonald started the Project Slumlord page on Facebook when she noticed decrepit properties on the West Side were owned by the same group of four or five landlords.

“These people are the worst of the worst,” MacDonald said.

At the top of her list is Catherine George, a Buffalo landlord whom a judge once called “one of the worst property owners I have ever encountered.”

Property records show George owns all or part of 15 properties in Buffalo, some of which, MacDonald said, George purchased at foreclosure auctions from the city.

“I started looking into it a little bit and very naively I said, ‘Oh, well all we have to do is tell the Common Council members and they’ll take care of everything.’” she said. “And here I am all these years later and they’re taking care of nothing.”

Even after a judge sent George to jail last year for housing court violations, city court documents show seven of the properties -- mostly on Buffalo's West Side -- still have open cases in Buffalo Housing Court.

Reached by phone, George did not directly answer questions about whether she has plans to address the state of her houses.

Asked whether she regrets buying the houses, she said, “No, I do not.”

She blamed MacDonald and other neighbors who live nearby and pointed to her humanitarian work with immigrants in Buffalo.

City leaders are now armed with new legislation – recently passed in Albany – that will allow the city to add unpaid building code fines to the annual tax bill. When those tax liens add up to a certain percentage of the home value, the city would have the ability to sell the home at its annual in-rem foreclosure auction.

The question is how aggressive city leaders will be in using the new tool.

“I’ve been in touch with building inspectors and housing court personnel, and what they’re telling me is that the city doesn’t have a plan for implementing this,” MacDonald said.

“That’s not true,” he said. “It’s just [that] we’re working out the final details. The mayor has made it a priority in his administration to look after many of these bad landlords.”

7 Eyewitness News asked to interview Mayor Byron W. Brown to discuss the issue, and spokesman Michael J. DeGeorge originally planned an interview for Tuesday. But he failed to set up the interview and said the mayor was out sick Wednesday.

“The mayor keeps passing the buck,” said Boyd, the East Side community activist. “He used to be out there advocating for the people. I loved that guy -- that guy. This guy? I don’t know who this guy is. And the people don’t know.”

Common Council President Darius Pridgen drew attention to the issue with a "shame campaign" last summer, when his office created a "Top 10" list of neglectful property owners. But when 7 Eyewitness News attempted to check up on the ten properties and see whether any progress was made, Pridgen's chief of staff Marc A. Pope failed to provide the original list despite multiple inquiries.

Petrucci said the frustration often grows not because his department fails to recognize or cite the owners of problem properties, but because the housing court system takes longer than they might expect.

“Once we have to issue a court case it takes time, and I think people are frustrated because it takes so long, often, to make corrections to some of these properties,” he said.