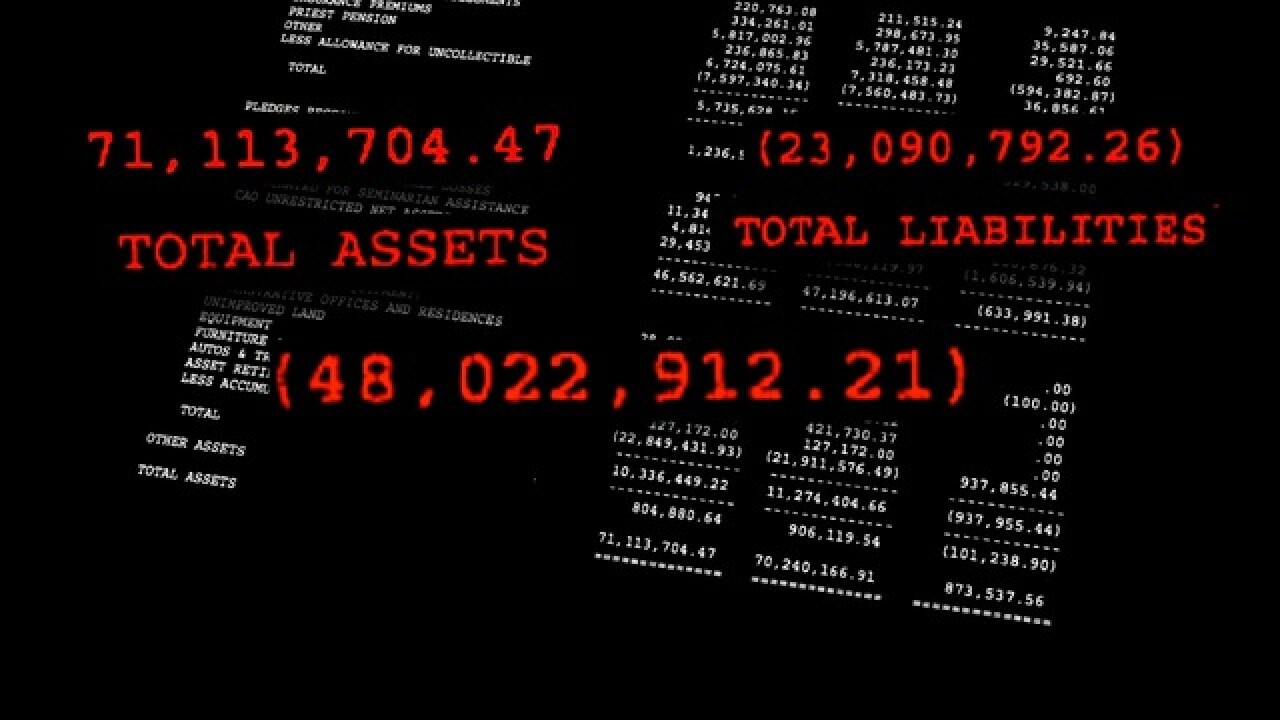 Victims of sexual abuse by clergy in the Diocese of Buffalo have been coming forward since March, when the diocese announced it would pay voluntary settlements to those who were abused.

While the bishop plans to sell his Oakland Place mansion to help pay those victims, internal church documents obtained by the 7 Eyewitness News I-Team show he will need much more money than the sale of the mansion -- assessed at nearly $2 million -- is likely to bring in. But the church appears to have plenty of money in the bank.

An internal balance sheet from August shows the diocese has $71 million in assets and $23 million in liabilities -- which leaves the church with a surplus of $48 million.

More than half of that surplus -- $31 million -- is undesignated for any specific use.

“They’re in strong shape,” said Michael Hoeflich, wealth manager at The Financial Guys in Amherst. “It could be cash that they have in bank accounts, savings accounts. It could be assets like property. It could be buildings, the furniture, it’s everything. And it also includes investments.”

7 Eyewitness News asked Hoelfich to look at the documents we obtained and evaluate the diocese’s finances.

“When you’re three times in terms of assets versus liabilities, you’re in great shape,” he said. “There’s just no doubt.”

According to minutes of the May 17 meeting of the Diocesan Finance Council, $11 million dollars of investments are now being shifted to the settlement program for payouts to victims.

Those minutes show that as of May, 95 individuals were “deemed eligible” for the program. Diocesan leaders declined to say whether there have been more claimants since then but it has likely increased. Figures of 191 total claimants were discussed at a recent news conference, but spokeswoman Kathy Spangler said that referred to 191 new complaints of sexual abuse from July 1, 2017 to June 30, 2018. Not all of those claims are necessarily eligible for the settlement program.

The diocese is preparing to pay average settlements of between $100,000 and $120,000 dollars per victim, according to the minutes of the finance council meeting. That would add up to about $10.5 million.

“In their minds, putting $11 million aside, it still keeps them strong financially,” Hoeflich said.

Some victims have begun appearing before the two retired state judges the diocese hired to administer the settlements.

In order to accept the settlements, victims must sign an agreement giving up their rights to sue the diocese in court -- which would be a possibility if Democrats in the State Legislature pass the proposed Child Victims Act this session.

The law would lift the statutes of limitation on child sex crimes for one year and could cost the diocese millions. In one case where a Buffalo Diocese priest was accused of abusing a boy in Hawaii, the victim sued the diocese and it paid a $1.5 million settlement -- or 15 times the $100,000 it plans to pay to victims coming forward now.

“I think many people would argue that that’s just almost...silly in terms of how low that is,” Hoeflich said. “But if this is the church’s attempt at trying to reconcile these things, people have a choice. They’re either going to take it or they’re going to say, it’s not enough.”

Ironically, insurers would cover much of the diocese’s legal settlements in court of the Child Victims Act becomes law, diocesan attorney Terrence M. Connors said at a recent news conference.

“That would mean a greater likelihood that there would be insurance coverage that would then kick in that doesn’t kick in for the Independent Reconciliation and Compensation Bureau,” Connors said. “While I can’t predict with any certainty, but there is a likelihood that if that were to pass, it would make it less likely, not more likely, that bankruptcy would be in the future.”

But the long-term financial outlook of the church is really the most troubling issue, Hoeflich said, referring to church and school closings in the last few years.

“Even with strong faith you might say, we can’t support this as we were before...then what do you do?” he asked. “That’s really, I think, the more distressing thing here is the future -- the uncertain future that the Catholic Church is facing.”

In response to this story, the diocese issued the following statement:

“Under the unique IRCP program, the diocese is committed to pay any awards made by the Administrators that are accepted by the claimants.  The diocese did not, and still does not, know what that number will be.  The determinations, both as to claim eligibility and amount of compensation offered on each eligible claim, are made by the Administrators, not the diocese.  We don't know their individual decisions until they're issued.  The numbers discussed by the Finance Council were purely speculative as the Council discussed various possible scenarios as part of its planning process.  Once the program comes to a conclusion, there will be a report produced; the diocese does not currently intend to make interim reports.”