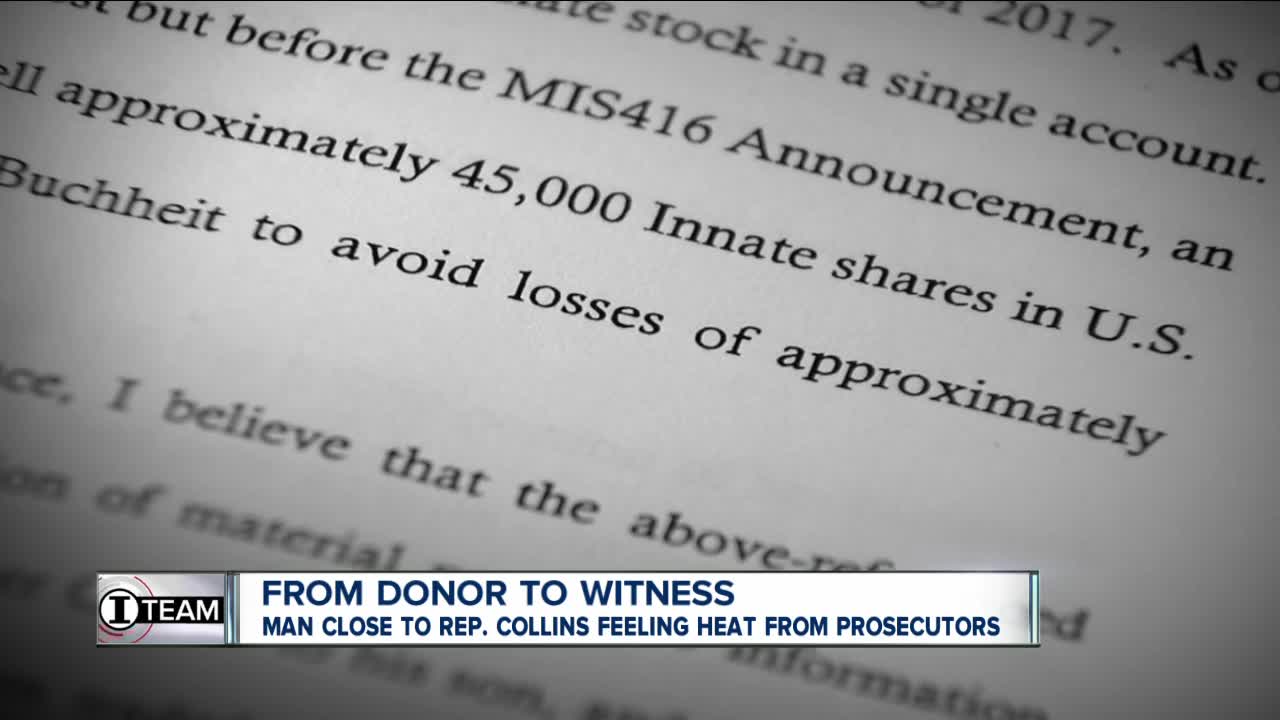 Documents obtained by the 7 Eyewitness News I-Team show FBI agents searched the upscale homes of two prominent businessmen with ties to Chris Collins as part of the federal investigation into alleged insider trading.

Gerry Buchheit is one of Collins' campaign donors and is planning to build a luxury skyscraper on Buffalo's Outer Harbor. But his involvement in the insider trading investigation has stayed quiet until now.

Documents obtained by the 7 Eyewitness News I-Team show he’s not the only prominent businessman with ties to Collins who was caught up in the federal probe. A month before Collins was arrested, federal agents obtained a warrant to search the upscale Williamsville home of Christopher Graham, president of Volland Electric, a company in which Collins owns a stake.

Both men were photographed on the White House lawn with Collins, President Donald J. Trump and First Lady Melania Trump in 2017 -- on the same day the Congressman learned of the failed drug trial for Innate Immunotherapeutics. Federal prosecutors last year indicted Collins for allegedly setting into motion an illegal insider trading scheme where close family and friends dumped their stock in the company before the bad news became public, avoiding major losses. Collins has denied the charges.

Early-morning raids by agents from the FBI’s Buffalo Field Office on July 11, 2018, at the homes of Buchheit and Graham got prosecutors what they wanted: access to the iPhones of the two Collins confidants.

Prosecutors told a judge who signed off on the warrants that “there is probable cause to believe” the cellphones of Buchheit and Graham contained evidence of “the crimes of insider trading, conspiracy to commit insider trading, and aiding and abetting insider trading.”

The government alleged that Buchheit obtained inside information from Collins and quickly dumped half of the stock he owned in the Austrialian biotech company, which “allowed Buchheit to avoid losses of approximately $19,000,” court papers state. Innate’s stock price dropped 92 percent once news of the failed drug trial became public, prosecutors said. Graham did not make any such trades, prosecutors said.

Buchheit and Graham, who were never charged with a crime, declined interview requests for this story, but Joseph M. LaTona, an attorney for Buchheit, said the developer was innocent.

“He just wants to be left alone,” LaTona said. “He’s a prominent businessman, he’s got a lot of projects going on. He didn’t do anything wrong.”

Buchheit made millions as the owner of Accent Stripe, a major paving company, and is known for developing the Quaker Crossing retail center in Orchard Park. He is also trying to build a 23-story apartment tower on Buffalo’s Outer Harbor.

LaTona stressed that Buchheit did not give an interview to the U.S. Attorney for the Southern District of New York, which is prosecuting the case against Collins.

“A thorough review of his stock transactions indicated he did nothing wrong,” LaTona said of Buchheit. “He didn’t testify in the grand jury and he just wants to move on with his life.”

But Penny M. Wolfgang, a retired State Supreme Court Justice, said a federal search warrant is not to be taken lightly, and prosecutors must show sufficient evidence of crimes committed to obtain one from a judge.

“We don’t allow search and seizure without probable cause and without a judge agreeing,” Wolfgang said. “The government must show, why do they need this, this is the person that they need, this person has relevant evidence. In these cases, it’s forensic-type evidence on the cell phone.”

Prosecutors say they were looking for communication among Collins, Buchheit, Graham and Michael Hook -- Collins’ chief of staff -- from June 22, 2017, according to federal search warrant applications that were filed in federal court in July 2018.

The four men spent that day at the Congressional Picnic on the White House lawn at the invitation of the president. But prosecutors have said a joyous day turned into panic for Collins when the biotech firm of which he was a board member failed a major clinical trial.

“Wow. Makes no sense. How are these results even possible???” Collins asked in an email to his fellow Innate board members that night, according to court documents.

Prosecutors said Collins passed the inside information to “certain family members and close associates, who in turn passed it onto others for the purpose of trading on that information.”

When Collins was indicted last year, much of the attention focused on what he was alleged to have said to his son, Cameron, his son’s future in-laws, and political aides who are alleged to have traded on the inside information to save themselves from huge losses.

But when federal agents asked a judge to allow them to search the homes of Buchheit and Graham, they said the day of the Congressional Picnic -- June 22, 2017 -- Buchheit owned about 90,000 shares of Innate stock. The day after the picnic, but before the public announcement of the failed drug trial, “an order was placed from Buchheit’s account to sell approximately 45,000 Innate shares in U.S. over-the-counter markets,” court records state. “This sale allowed Buchheit to avoid losses of approximately $19,000.”

But while Graham, the Volland Electric president, also held shares in Innate, “he did not trade in that stock on June 23, as Buchheit did,” the court documents stated.

A spokeswoman for Collins said she could not comment on the search warrants, citing the upcoming trial. She referred questions to Jonathan Barr, the Congressman’s attorney, who did not respond to messages seeking comment.

The fact that neither Collins confidant was ever charged in the insider trading scheme raises the question of whether they will act as witnesses for the government in Collins’ upcoming trial, said Wolfgang, the former judge.

“These people would be possible witnesses, their phones have certain evidence that’s going to show the time and the place that these illegal trades were made, for example, and they’re going to be able to get from these witnesses, from this evidence, something relevant to the charges against these defendants,” Wolfgang said.

Prosecutors often seek to make a deal with alleged co-conspirators in cases like these, she said.

“We found that you were, you know, cooperating or conspiring or did some illegal acts, but we’re not going to charge you,” she said. “But you have to admit this and be a witness.”

But LaTona, Buchheit’s lawyer, said he doubted that would be the case, as Buchheit was never interviewed by anyone from the U.S. Attorney’s Office in Manhattan, which declined to comment on its prosecution of the case.

“He was never interviewed by the Southern District, and if he was any kind of a witness, they’d want to interview him before ever calling him to the witness stand,” LaTona said.

Prosecutors, though, could subpoena either man to testify about evidence found on his cell phone, with or without their cooperation.

“It’s going to be very important, probably, in the trial itself,” Wolfgang said. “if there is a trial.”