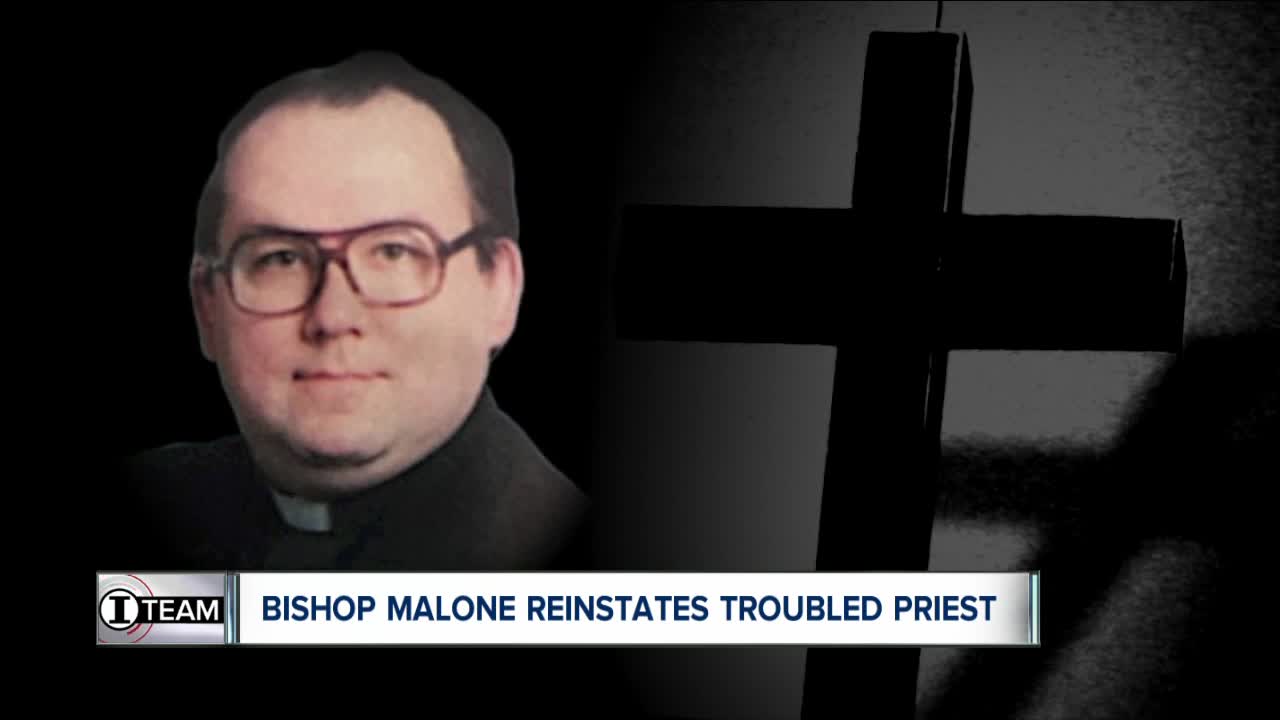 Bishop Richard Malone returned a priest to ministry despite a history of pornography found in church rectories.

BUFFALO, N.Y. (WKBW) — Bishop Richard J. Malone on Thursday returned a priest to active ministry despite a history of pornography problems and a looming federal investigation that may involve the priest.

Malone returned Rev. Robert A. Stolinski to "active ministry," the diocese said in a statement, after abuse allegations against him "have not been substantiated."

But the bishop's own records -- obtained by the 7 Eyewitness News I-Team -- detail a long history of pornography found in rectories where Stolinski was living. The diocese made no mention of those incidences in its public statement Thursday.

Stolinski was sent to a "treatment center" in Canada twice but allegations continued to surface over the past two decades. He is retired but was allowed to hold a position "assisting clergy" at St. Vincent de Paul Catholic Church in Niagara Falls until his suspension last year, according to a church bulletin. It is unclear whether he will return to that church now that Malone and his diocesan review board has cleared him.

In 1987, when Father Joseph Bissonnette was murdered on Buffalo's East Side, Stolinski was living in the same rectory and serving as chaplain at Erie County Medical Center.

"When the police investigated, they found a great deal of pornography (male homosexual pornography not involving children)," reads a passage in Bishop Malone's "black binder" of diocesan secrets prepared for him by Terrence M. Connors and Lawrence J. Vilardo's law firm when Malone became bishop in 2012.

"Father Stolinski was counseled," the passage states, going on to describe financial problems with the priest. "He was then sent to Southdowns [treatment center] for analysis and counseling."

The passage in the binder includes reference to a third incident in 2010, but it is unclear what that entailed.

Stolinski, despite his stated retirement and the allegations, served until last year at the Niagara Falls parish, and there is no indication parishioners there have been made aware of his full history.


Diocesan attorney Terrence M. Connors did not respond to a request for comment, but Kathy Spangler, spokeswoman for Bishop Malone, said the allegation against Stolinski was "thoroughly investigated and all available information was presented" to the review board.

A church directory lists Stolinski as living at a retired priests residence in Tonawanda, but phone calls there went unanswered Thursday evening.

The diocese is currently under federal investigation, and a source told 7 Eyewitness News that FBI agents were investigating child pornography, which is a federal crime. Agents have been notified about Stolinski's history, the source said, though it is unclear whether they have obtained information about his specific case in the multiple subpoenas prosecutors have served on the diocese.

More than 120 clergy in the Buffalo Diocese have been accused of sexual misconduct, and Malone has been criticized for allegedly covering up recent abuses.