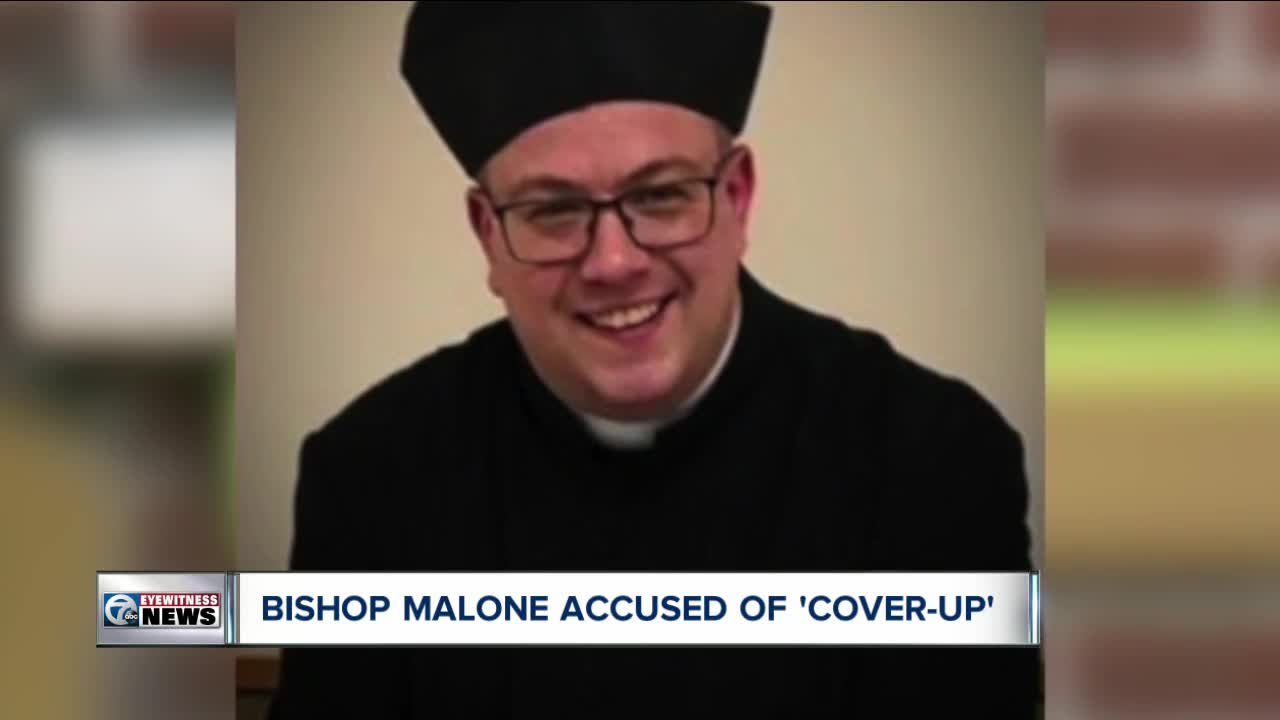 Bishop Richard J. Malone is allowing a Cheektowaga pastor to remain in ministry despite allegations of inappropriate contact with children, stalking and harassment of a seminarian and perhaps the greatest Catholic sin of all: violating the seal of confession.

BUFFALO, N.Y. (WKBW) - — The mother of a seminarian wants to know why Bishop Richard J. Malone is allowing a Cheektowaga pastor to remain in ministry despite allegations of inappropriate contact with children, harassment of a seminarian and perhaps the greatest Catholic sin of all: violating the seal of confession.

Those were the allegations brought months ago against the Rev. Jeffrey Nowak, pastor of Our Lady Help of Christians Church, by Marie Bojanowski, the mother of a Buffalo Diocese seminarian whom Nowak allegedly sexually harassed.

“I would say it’s a cover-up,” Bojanowski said. “Bishop Malone has done absolutely nothing.”

Despite putting the complaints in writing and submitting them to the diocese — and pushing the bishop’s staff for answers — Bojanowski said Bishop Malone has never responded to her, and the bishop has allowed Nowak to remain pastor of the Cheektowaga parish.

Additionally, 7 Eyewitness News has learned from Buffalo Diocese sources that Malone — without any notice to parishioners — is secretly planning to send Nowak for psychiatric evaluation at one of the Catholic Church’s “treatment centers,” which for decades were unsuccessful in treating priests who engaged in abusive sexual behavior with parishioners.

“That's why I'm here now,” Bojanowski said in an interview with the 7 Eyewitness News I-Team. “I'm forcing the bishop’s hand and I want the people of Buffalo to know there is no transparency. He's been covering this up for nine months. And he has not done a thing to Father Nowak.”

Reached by phone Tuesday afternoon, Father Nowak said, “Right now I’m unaware of that and I’d just ask you to talk to my legal counsel. That’s all I have to comment.” He then hung up.

Bojanowski’s son, Matthew -- a 38-year-old Buffalo Diocese seminarian -- began a “professional relationship” with Nowak in 2014 while Bojanowski was a flight attendant. Bojanowski was considering joining the priesthood and went to Nowak for confession.

In a letter obtained by the I-Team, Bojanowski wrote that soon after that confession, Nowak began making “unwelcomed advances,” which included touching his face.

Nowak said in a Facebook message to Bojanowski shared with the I-Team, “...if I wasn’t a priest, and I sought out a relationship, it would be a person like you that I would seek out.” Bojanowski wrote that Nowak also said to him, “you are in good physical shape and have the good looks,” and, “When you become a priest, you will be what we call clerical eye candy!”

Matthew Bojanowski declined an interview request for this story because he is a current Buffalo Diocese seminarian and was not authorized to speak with reporters. But Marie Bojanowski said her son first brought these concerns up with the diocese in November -- nine months ago -- and put them in a letter to the bishop on Jan. 24, along with a packet of documentation. He sent the packet by certified mail and receipts show a diocesan representative signed for it on Jan. 28.

After hearing no response, Marie Bojanowski said she sent her own letter to the bishop on June 17, writing, “It has been over six months since you were made aware of the allegations. My husband and I have been patient long enough. In my opinion, Father Nowak is a classic predator, and needs help!”

Bojanowski also provided a certified return receipt for that letter, and she said she called the bishop’s secretary when she got no response. The secretary informed her that Bishop Malone was on vacation. Bishop Malone took off nearly the entire month of July and returned to Massachusetts, according to his public schedule.

Bojanowski said she at one time welcomed Nowak into her home when she attended St. John Vianney Church in Orchard Park and Nowak was assigned there. But she said she began to suspect something was amiss when Nowak would show up unannounced for “pastoral visits” at her home whenever her son was in town.

“Because he needed to know where [Matthew] was every minute of the day,” Bojanowski said. “And who he talked to, and who are they? And why are you talking to them? That's where [for] my son, the light bulb went on and he said, ‘he's not out for my best interest at all.’”

Matthew Bojanowski’s letter also alleges that Nowak “would also speak of growing old together and how ‘we’ would be in retirement.” He said Nowak set up a savings account for him and displayed framed pictures of Bojanowski on his desk.

“I joked with him if he were making a shrine,” Bojanowski wrote in the letter to Bishop Malone.

Bojanowski said her son considered the alleged sexual pursuits a violation of the seal of confession based on what he confessed to Nowak. The seal of the confessional is among the most sacred Catholic rites, and violating it can lead to ex-communication or dismissal from the Catholic Church.

“The sacramental seal is inviolable,” Catholic Canon Law states. “It is absolutely wrong for a confessor in any way to betray the penitent, for any reason whatsoever, whether by word or in any other fashion.”

Blackmail and the bishop

Bojanowski alleges that after her son spurned Nowak’s advances, someone began circulating a private letter between Matthew Bojanowski and the Rev. Ryszard Biernat, secretary to Bishop Malone and vice-chancellor for the diocese.

“This letter was obtained by Father Nowak while rummaging through my apartment in Boston, MA almost 3 years ago,” Bojanowski wrote to Bishop Malone.

7 Eyewitness News has viewed a copy of the letter, in which the words ‘love’ are used, but Bojanowski’s mother said the communication between her son and Biernat was platonic and was being circulated to cast aspersions on her son because of his refusal to accept Nowak’s advances.

“Father Nowak broke the seal of confession, stole documents, has been talking very badly about my son to other priests,” Bojanowski said. “And they're on his bandwagon to destroy my son's reputation and Father Ryszard's. And it's wrong.”

7 Eyewitness News reported in May that Nowak was under investigation for sexual misconduct allegations, and a diocesan spokeswoman at the time said, “a preliminary inquiry has been initiated concerning allegations of inappropriate behavior/unwanted contact."

But unlike the nearly 20 other Buffalo Diocese priests who have been suspended in the last year for sexual abuse or misconduct allegations, Bishop Malone has allowed Nowak to remain pastor of Our Lady Help of Christians during the investigation.

Bojanowski believes she now knows why.

Both letters to the bishop are filled with allegations of sexual blackmail by Nowak and two other former seminarians, one of whom is a pastor in the diocese. Marie Bojanowski said she suspects Nowak may have threatened to “bring down” other priests with incriminating information if he is suspended.

“Bishop Malone is afraid of Father Nowak, because he knows what Father Nowak has on people, and he's afraid of all this stuff coming out about the other priests,” she said. “He’d probably have to put 10 priests on administrative leave to investigate all this.”

Buffalo Diocese sources said instead of suspending Nowak, the bishop plans to send him to Southdown Institute in Canada or St. Luke’s Institute in Maryland, which are two mental health treatment centers that the Catholic Church used for years in failed attempts to rehabilitate priests who sexually abused children and other parishioners.

“He needs to be defrocked. He needs to be gone,” Bojanowski said. “There’s no way of sending them away for a few weeks, slapping them on the wrist and letting them back.”

Parishioners at Our Lady Help of Christians have been contacting 7 Eyewitness News and wondering why Nowak is still on the altar saying Mass.

“What bothers me the most,” one parishioner said in an interview with the I-Team, “[is not] whether you did it or not, but why is there such a cover-up?”

The letter from Matthew Bojanowski to Bishop Malone also put in writing rumors that have been circulating about an alleged incident regarding two young boys at St. John Vianney School in Orchard Park, where Nowak was assigned from his 2012 ordination until 2015.

“He had confided in me, and my mother, that while he was at St. John Vianney in Orchard Park, NY, allegations were made against him for alleged inappropriate actions in the boys bathroom with students,” Matthew Bojanowski wrote in the Jan. 2019 letter to Bishop Malone.

His mother confirmed that Nowak spoke with her about the allegations while they were at a parish Lawn Fete.

“Father Nowak told me...that two boys came forward accusing him of some inappropriate action in the boys room,” Marie Bojanowski said. “But he made nothing of it. And I said to him, ‘What are you doing? Why are you telling me this?’ He didn't care. He wasn't worried at all.”

The allegations do not appear to have affected Nowak’s career. After that assignment, he served as Canonical Administrator of Mary Queen of Angels School from 2015 to the school's closing in 2017.

Bishop Malone assigned him his first pastorate at Our Lady Help of Christians in October 2018 -- where he remains to this day.

“I have to tell the people of Buffalo, stop putting your money in the basket until Malone is gone,” Bojanowski said. “Because nothing is ever going to get rectified. He's never going to do the right thing. And there is no such thing as transparency with him.”