For Buffalo Diocese survivors, their lawyers and a whistleblower, it all comes full circle 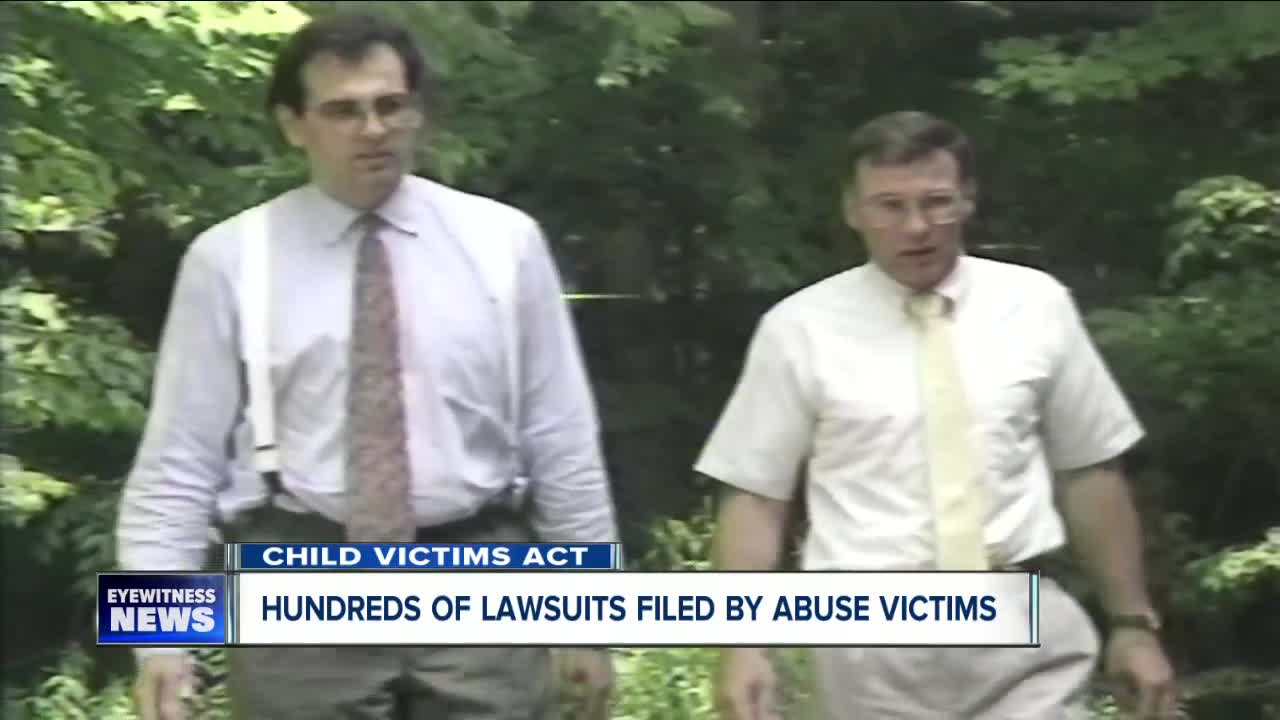 With the click of a mouse, Christopher Szuflita became the first survivor of child sexual abuse in New York State to file suit under the Child Victims Act. But for Szuflita and his attorney, Steve Boyd, the moment was 25 years in the making.

BUFFALO, N.Y. (WKBW) — With the click of a mouse, Christopher Szuflita became the first survivor of child sexual abuse in New York State to file suit under the Child Victims Act.

But for Szuflita and his attorney, Steve Boyd, the moment was 25 years in the making.

“[He] was the first person who had the courage to come forward and show his face on camera in 1994,” Boyd said of Szuflita.

In 1994, Szuflita did what was virtually unheard of at the time: he came forward to publicly accuse a priest in the Diocese of Buffalo -- the Rev. Joseph Friel -- of sexual abuse.

“I think it started in 1967 or 1968, that I was sexually molested by Father Joseph Friel,” Szuflita told Eyewitness News viewers back then.

Szuflita told his story to Boyd, who was a reporter for Channel 7 back then and who was one of the first reporters to expose whispers that certain diocesan priests in Buffalo had something evil lurking beneath their collars.

Boyd is now an attorney -- representing Szuflita and more than 100 others -- and he made sure his old source was at the front of the line when the new law’s one-year “look back window” went into effect Wednesday at 12:01 a.m.

Cheers erupted in a cramped room in Boyd’s Amherst office when a paralegal made the final “click” to file Szuflita’s legal papers to the state court website.

“It’s the first time I've seen him in 25 years, too,” Szuflita said of Boyd. “And to be able to stand next to him and he’s representing us, it’s great.”

The now-deceased priest denied the allegations when boyd got him on the phone in 1994. Szuflita says he was actually threatened by another priest when he tried to report the alleged abuse by Friel.

“He basically didn’t believe me,” Szuflita said. “He said I was committing a mortal sin...and I probably could be excommunicated from the church.”

Diocesan lawyers back then criticized Szuflita’s claim, saying it was riddled with “factual and legal misstatements…” and said there had never been any similar allegations made against Friel. But nine new lawsuits against friel and the diocese were filed on Wednesday morning, and more than 100 suits now target the diocese, including some against active priests.

“We have the control, and that feels really good,” Szuflita said of his fellow abuse survivors. “Because before, the church used to tell us we weren't credible and things like that, and now they know...we are telling the truth.”

Things also came full circle on Wednesday for Michael Whalen, the first abuse survivor to speak out in 2018, as well as Siobhan O’connor, the church whistleblower who watched Whalen’s first news conference from inside the chancery. She later left the bishop’s side and joined the survivors in their fight for truth.

“Especially just thinking about how he was alone out there, you know, it was just Michael,” O’Connor said. “I didn't even know who he was at the time, I just called him the man in the green jacket. And now to think that he is so not alone. There are hundreds of survivors who are filing their claims tonight.”

Whalen said, “I've cried, I don’t know how many hundreds of hours on the phone with survivors and hearing their stories. But to have this day finally come for us? It's justice, you know, and that's the word that best describes it...some kind of justice for us.”

Bishop Richard Malone weighed in with a taped apology -- “I want to again express my apology and that of the Diocese of Buffalo to victim-survivors of abuse,” he said -- but it did not go over well with survivors like Kevin Koscielniak who were gathered at Boyd’s office.

“Walk away,” Koscielniak said in an interview, referring to the bishop. “You're not a leader, okay? You're a terrible leader, you've proven you're not a leader. You really want to truly care, then you walk away, and somebody who really does understand needs to get appointed and turn this around.”

Boyd, a former altar boy, promised the bishop a tough road ahead as the lawsuits move through the courts.

“At St. Martin School in South Buffalo, they taught me how to apologize: admit what you did, take responsibility for your actions and make it right,” Boyd said. “You watch the bishop’s video tonight, and you tell me how many of those boxes he checked. I can assure you when this is over, he'll have checked all three. I promise you that.”

Those words give Szuflita confidence that this time, he will prevail.

“You gotta have faith, and that’s what we have,” Szuflita said. “And I think in the long run, I think we're gonna win.”