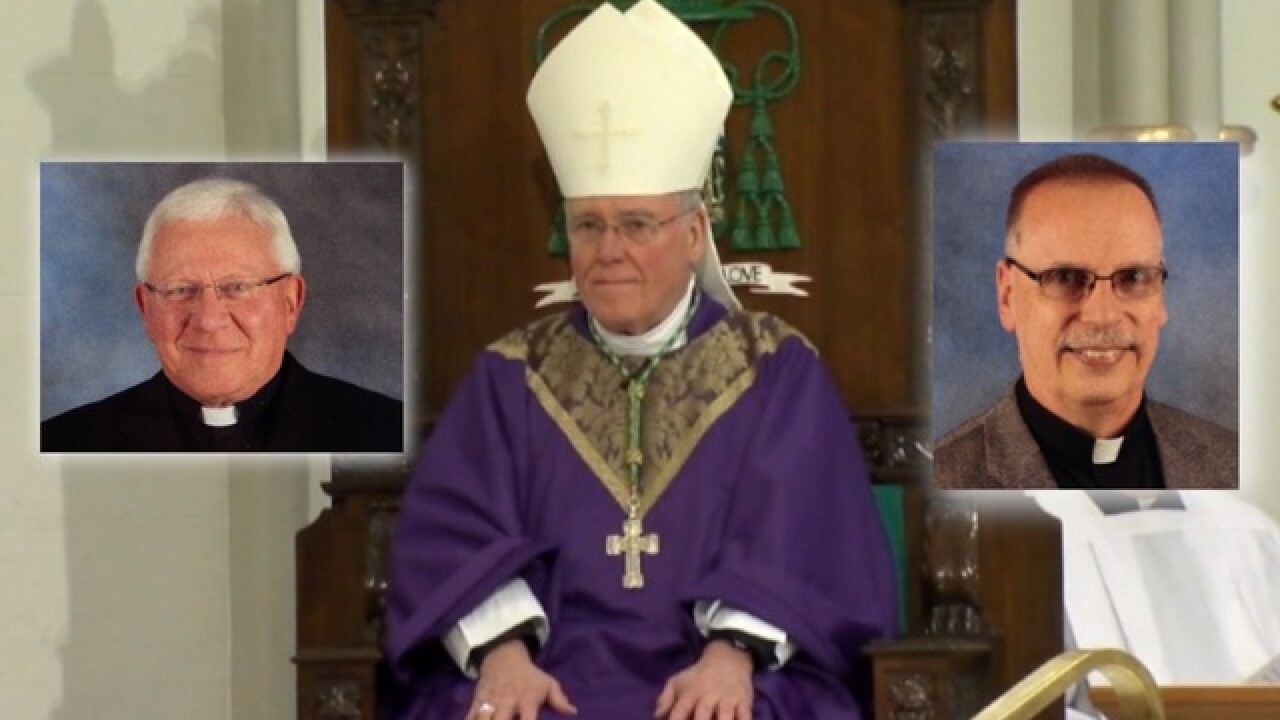 **Editor's Note: Video player above not working. Watch video on YouTube below.**

Buffalo Bishop Richard J. Malone made a statement Friday during his interview with WBEN radio that is now being called into question.

WBEN host David Bellavia asked the Bishop, “Are there any priests currently under your command, that have any allegations of any sort of assault against children?” Malone responded by stating: “Not that I know of.”

It now appears that statement may not be totally accurate because Msgr. Fred Leising, one of the accused priests, was saying Mass as recently as Saturday. The other accused priest was actively ministering as a pastor.

In an interview with 7 Eyewitness News on Saturday night, Msgr. Leising denied the allegation that he stuck his tongue down the throat of a teenage girl in the 1980s. But he said the diocese has known about the allegation for months and is only suspending him now in a desperate attempt at damage control.

“Yes, actually I had a funeral this morning at Nativity, where I used to be the pastor for 12 years,” Msgr. Leising told 7 Eyewitness News. “I had gotten a call from Bishop Grosz this morning telling me I was going to be put on administrative leave.”

Msgr. Leising, the former president-rector of Christ the King Seminary, says he met with Bishop Grosz about the situation months ago. Internal documents obtained by 7 Eyewitness News show the diocese knew of the allegation since April. Leising said Bishop Malone finally suspended him now - six months later - after consulting with his attorneys.

Leising explained: “They told me that as a result of the Bishop hearing that there might be more people working who perhaps shouldn't be - I think that was a claim made by Father Zilliox as well as by Siobhan O’Connor - that the Bishop I guess met with attorneys and others and they looked and reviewed all the documents they had about everybody.”

The woman making the allegation is Stephanie McIntyre, who says she was also the victim of abuse by Father Fabian Maryanski. She says she was at a party with Maryanski at the rectory when Leising, Maryanski's classmate in the seminary, "hugged me goodbye alone in the garage, pulling me close and then shoved his tongue down my throat.”

She said when she told Maryanski, he simply said, "That's just the good old boys club" and "Freddy has a crush on you."

When presented with this allegation, Leising responded: “It's not true but I have definite memories of that.” He goes on to explain, “What happened was I had done all the work I had to do there and I went to leave and as I got near the car, she actually touched me and I turned around and she kissed me and then put her tongue in my mouth and so I was shocked by it, to tell you the truth and then I pushed her away and I got in the car and I left.”

Internal documents provide critical details about the second case, which concerns Fr. Ronald Sajdak. Until recently, Sajdak was pastor of two East Side churches as well as being the priest who took over for Leising in 2015 as pastor at Nativity of the Blessed Virgin Mary Parish in Clarence. Like Leising, Sajdak was on the Diocese's radar for months.

A memo written by Auxiliary Bishop Edward Grosz and an agenda prepared for the June meeting of the Diocesan Review Board clearly show that Sajdak was accused of sexual abuse of a minor.

Kevin Stocker, the attorney representing the man who made the claim, said the abuse occurred over a 10-year period when his client was 13 or 14 years old.

“He feels like he’s reliving this again he’s having nightmares again. The only reason why he came forward is to protect future children.”

Stocker says a lawyer from Terry Connors’ law firm, which represents the diocese, told him that because the sexual encounter happened when Sajdak was in the seminary, it in effect did not count.

Stocker said he reported the claim to the Diocese in April and they did not suspend the priest until Saturday - more than six months later.

"I questioned why they're keeping him in service," Stocker said, "because to be on the safe side, you've got to think of other children."

In response to questions from 7 Eyewitness News, diocesan spokeswoman Kathy Spangler provided information regarding the allegations against Msgr. Leising and Fr. Sajdak. Regarding Msgr. Leising, she stated the followed: “In the ongoing investigation of an allegation against a different priest, the details indicate that Msgr. Leising may have been involved in an improper action. He is placed on administrative leave pending the necessary further investigation.”

When it comes to Fr. Sajdak, Spangler indicated that “the allegations against Fr. Sajdak involve a complaint made by a person who is two and a half years younger than Fr. Sajdak regarding conduct that is alleged to have ended fifteen years before Fr. Sajdak became a priest. The diocese has placed him on administrative leave so that the allegations can be investigated.” Spangler closed by noting that “the Diocese of Buffalo continues to take actions to ensure minors and adults are safe and free from harm. It is hoped that the alleged improper actions of these two priests did not put or cause harm to anyone.”

Fr. Sajdak did not respond to a phone call and message seeking comment.