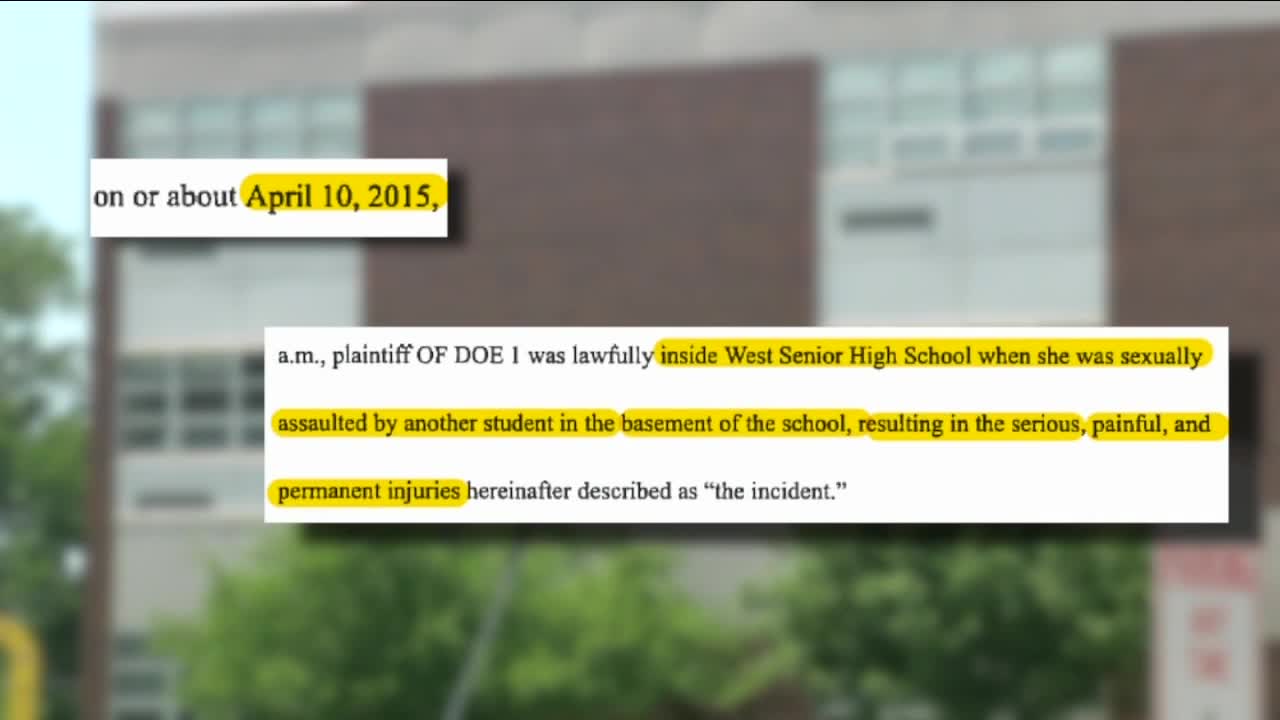 Lawyers are alleging another basement sex assault occurred at West Seneca West High School when a student was taken into the school basement.

BUFFALO, N.Y. (WKBW) — Lawyers are alleging another basement sexual assault occurred at West Seneca West High School when a student was taken into the school basement and forcibly touched by an older student.

This assault is alleged to have happened in 2015 -- four years before a similar alleged assault that was revealed last month -- and lawyers say that along with other cases they have uncovered, it establishes a disturbing pattern at West Seneca.

At 11:43 a.m. on April 10, 2015, a female student was “inside West Senior High School when she was sexually assaulted by another student in the basement of the school, resulting in...serious, painful and permanent injuries,” the lawsuit states.

The 15-year-old female student is identified in the civil filing using a pseudonym, while the alleged perpetrator -- who was then an 18-year-old student at West Seneca -- is not identified. Public records show soon after in the alleged assault, West Seneca Police charged the 18-year old student with forcible touching and harassment, but the outcome of the criminal case is unclear.

The accused student in the 2015 case is a different student than the one accused in the 2019 case.

“The remarkable thing that happened in this case was that when the last story that you ran was on TV, the most recent victim that came forward to us actually thought it was her,” said attorney Rich Hall. “Because it was so eerily similar to what she experienced.”

In the civil lawsuit, Nicastro, Hall and fellow attorney David Wolff place blame on the school district for not only allowing access to the school basement, but for allegedly using “their authority and/or power and influence to discourage and/or prevent minor victims and their families from disclosing allegations of sexual abuse.”

A spokeswoman for West Seneca Central Schools did not immediately respond to a request for comment about the lawsuit.

The lawyers allege West Seneca, over the course of the past few years, has permitted “an environment that allowed sexual abuse to persist,” as evidenced by at least five additional sexually related incidents involving West Seneca teachers, students or guidance counselors the law firm has found in its research.

The latest allegations come less than two weeks after the same lawyers filed a lawsuit alleging that a 15-year-old student with special needs was taken into the basement of West Seneca West in 2019 and was sexually assaulted by another student.

The plaintiff in that case -- identified in the filing only by her initials -- was inside the high school on May 10, 2019, “when she was sexually assaulted by another student in the basement of the school, resulting in...serious, painful, and permanent injuries,” according to a lawsuit filed in State Supreme Court.

The adolescent offender in that case pleaded guilty to one felony and one misdemeanor sex crime charge in July 2019, admitting that he engaged in sexual conduct with two female victims without their consent, a spokeswoman for Erie County District Attorney John Flynn said.

At the time, a spokeswoman for the school district said, “The District has a zero tolerance policy against sexual assault and we remain fully committed to protecting the safety and well-being of our students."

Wolff said he believes there could be more victims out there, thinking about coming forward.

“These are only the cases that came forward from one news article, these past people,” Wolff said. “Who else is out there that’s been affected by this? We don’t know.”