Thursday marks a big day for police officers and firefighters in Buffalo.

The city is hosting a special commissioning ceremony for the new Buffalo Police and Fire Headquarters at the Michael J. Dillon U.S. Courthouse Building. The 1936 building, across Niagara Square from Buffalo City Hall, housed U.S. District Court until the opening of a new courthouse in late 2011.

Buffalo bought the six-story building to use as its public safety campus for $1. The fire and police headquarters previously occupied separate buildings. 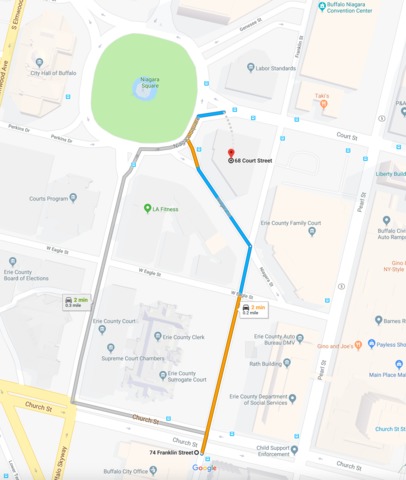 It will head from old police headquarters on Franklin Street, over to Niagara Street and into Niagara Square. There, the Buffalo Police Department will join the Buffalo Fire Department. Together, police officers and firefighters will proceed under a large American flag hanging between two fire trucks on Court Street, and into their new headquarters.

The procession may have an impact on your commute: Court Street between Franklin Street and Niagara Square will be closed between 9:30 and 11 a.m.