"Help save my son": a mother's dedication to getting her son a new kidney

"Help save my son" how one mother is using a different approach to getting her son a new kidney.

Jason Batch is a normal 29 year-old, except for one thing.

"My GFR, or kidney function, is at five percent for both of them."

Batch's kidneys are failing. It is something his mother Lynda had prepared for since Jason spent two years in the hospital as a baby.
"We knew at some point in life he would probably need a kidney transplant." Jason's mother Lynda Gibson said, "We didn't know it would be this young."

Batch has been in search of a new kidney for months, and his mother decided to take a different approach to getting him that kidney by placing stickers on her rearview window. 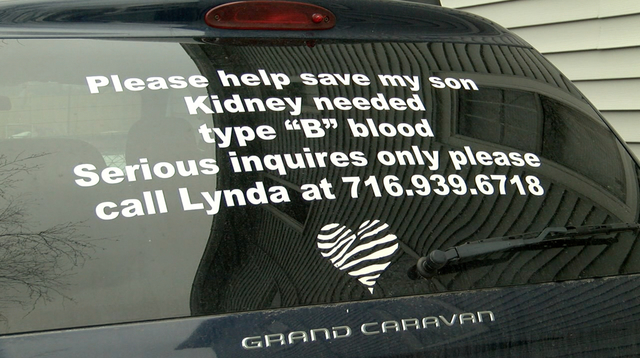 It reads "Please help save my son" with all of the information pertaining to donating a kidney to Jason.

They need the donor pretty quickly. Jason has lost over ten percent of his kidney function over the past six months. While it has been difficult, it will not stop him from keeping positive.

"I'm not giving up and I don't expect anyone else to give up either."