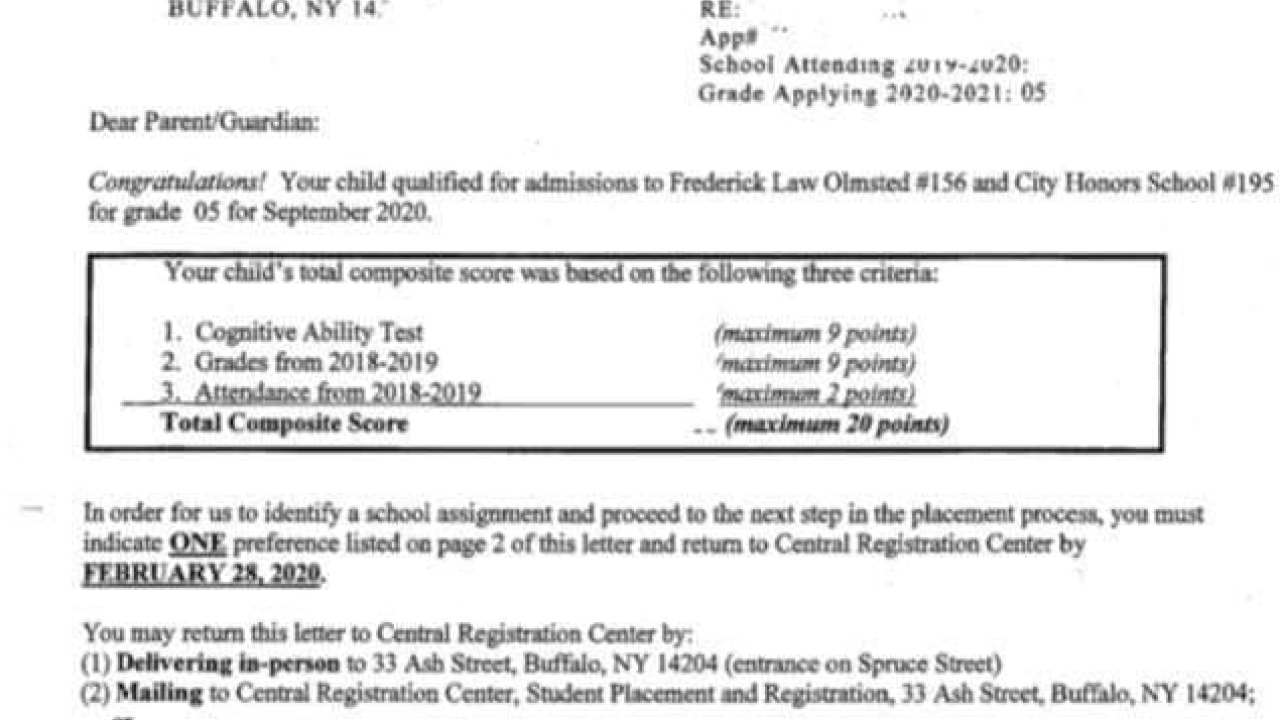 BUFFALO, N.Y. (WKBW) — "Congratulations! Your child qualified for admissions to Frederick Law Olmsted #156 and City Honors School #195..." That statement is causing confusion among parents who have children in the Buffalo Public School system. Students must take an admissions test to get into the schools. This letter was sent to students who did not receive a score high enough to secure a definite spot at City Honors or Olmsted, but designated them a spot in the lottery to get into those schools.

Parents said the statement made them think their child was admitted into Olmsted or City Honors.

One mom said, "so many kids are going to be heartbroken." Another mother explained she already took her child out for a celebratory dinner only to find out her child wasn't actually admitted.

One student, who has been caught in the confusion, sent an email to the school board. It said:

"...I'd like to talk about the City honors letters. I have been waiting for my letter for two days now and haven't received it like the other students in my classes. Today I realized that the letter sent to those students was incorrect and I got angry. I feel that you should check them more carefully because they became so happy and then they were basically denied because they know going to City Honors like they were told may not happen. I myself would feel the same way about it. That's not all that's bothering me, I would like to know why I didn't even receive a letter. Everyday for the past week I've come home looking forward to receiving this letter and now knowing they are incorrect and I might not get it makes me mad. I would like to know how I did on the test this year so it won't bug me all year and have me thinking I tried so hard and now I don't even receive a letter gets me frustrated. I would appreciate it if the Buffalo Public Schools sent these letters with caution in the future."

Students with a score of 19 or 20 are able to attend. Those with a score below that are entered into a lottery. A source tells 7 Eyewitness News 83 of the 90 school spots are secured, therefore there are only 7 spots in the lottery. The amount of lottery slots can only increase if students who were admitted chose not to attend either school.

The school district said there will be a new letter sent out clarifying the initial letter, explaining the lottery process.

"I am incredibly disappointed to learn about so many parent and students receiving a letter which miscommunicates the status of their application to some of our criterion-based schools. I have seen how upsetting this has already been for some parents and students. As a new Board Member, it has been a priority of mine to reform how we do business in Central Registration, first and foremost, with how we are communicating with families. We have failed in our commitment to some of our students and families here and we must take significant action to correct this. It must be our responsibility to build a trust with our families, a trust that is currently broken, in the work and procedures of Central Registration."