Black students in Buffalo twice as likely to be suspended than white students, report shows 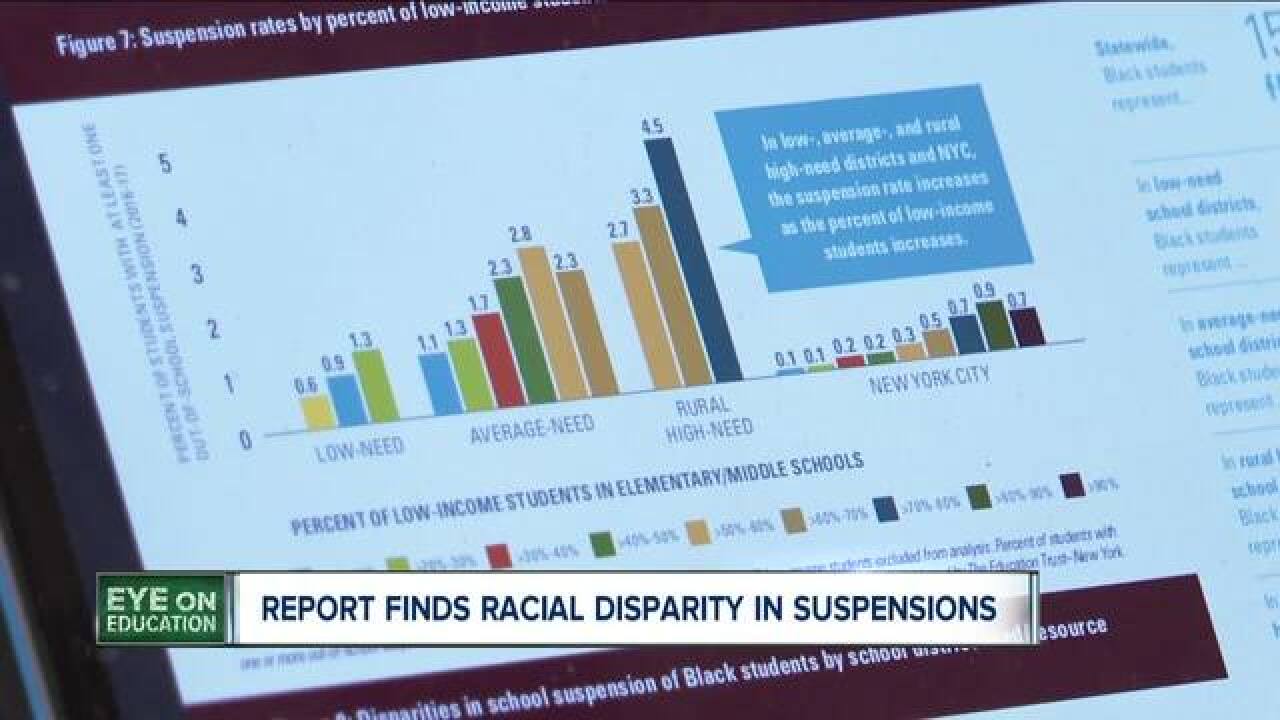 In Buffalo Public Schools, black students are more than twice as likely to be suspended than their white classmates. Nearly one-fifth of all black students in BPS have been suspended at least once.

This data is detailed in a new report about school suspensions by the New York Equity Coalition, a collection of organizations across New York State working to study education equity.

The report looked at schools across the state using data from the 2016-17 school year and found black students are 2.4 times as likely to be suspended as their white peers. New York City and "low-need" schools were found to have the highest disparity.

In Buffalo, black students are 2.2 times as likely to be suspended as white students.

BPS also finds itself with the highest suspension rate for large urban schools in the state. It tops the "Big 4" districts of Rochester, Syracuse and Yonkers. It also beat out New York City, although researchers explained the NYC takes a different approach to handing out suspensions than the other major city districts.

In Buffalo, nearly 14 percent of all students have been suspended at least once. For black students, 19 percent have had at least one suspension.

Those numbers are much higher than the statewide average of 2.7 percent.

According to the data, black students represent 47 percent of all students in BPS, but account for 65 percent of suspensions.

That racial disparity is even more pronounced in the rest of Erie County, where 5 percent of students are black but those students account for 21 percent of suspensions.

Black male high schoolers are suspended at the highest rate of their peers in BPS. Just over 30 percent of those students have been suspended at least once.

Buffalo Public Schools issued the following statement through a spokesperson:

Disproportionate suspensions are a long-standing, multi-faceted justice issue in education in Buffalo and elsewhere. It is one of the four big issues along with attendance, over-referral to special education, and failing schools, that framed our plans for the Education Bargain in Buffalo.  The data in the Education Trust study is two years old and the good news is that, so far this year, suspensions in Buffalo are trending downward.

The District is also working effectively with parents to address this issue. Specific strategies include Parent Congress collaborations, Parent Centers, Parent Summits, and inclusion of parents in CLRT, TIC, RP and TAC-D training.

It takes time for this essential mindset change to take hold, and we are encouraged by the array of strategies that we are implementing to reduce suspensions and racial disproportionality in a number of areas.

The Buffalo District Parent Coordinating Council, Buffalo Urban League and Community Action Organization of WNY are among the local partners of the New York Equity Coalition.