Do you plan on attending a Sabres game this year? Ticket prices for 2018-19 season announced

Copyright 2018 Scripps Media, Inc. All rights reserved. This material may not be published, broadcast, rewritten, or redistributed.
Vogan, David
Posted at 11:01 AM, Aug 23, 2018

The Buffalo Sabres announced their single-game ticket prices for the 2018-19 regular season.

There are four tiers of ticket pricing. Tier one is the most expensive. There are a total of six Tier One games, 15 Tier Two games, seven Tier Three games and 13 Tier Four games. 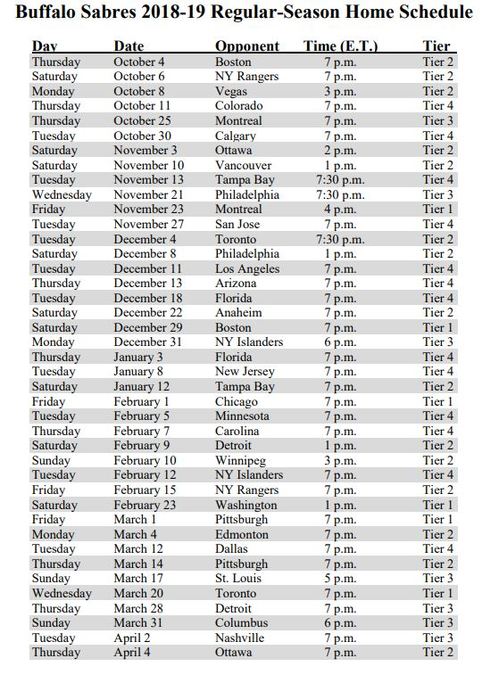 The price of each individual game can rise or fall to reflect the demand for tickets according to the Sabres. However, ticket prices will never fall below the prices you see above.

The Sabres will offer their lowest box office prices of the season for all games in Tiers Two, Three and Four between September 7th and September 30th.  The only way to purchase Tier One games in September will be with a mini-pack.

Sabres fans can renew their mini-packs with the team starting September 5th. Mini-packs go on sale to the general public September 7th. Fans can create their own ticket package ranging from five to 40 games.

Tickets can be purchased at sabres.com. All games will be available for purchase October 1st. After October 1st, the Sabres dynamic ticket pricing model will kick into effect.