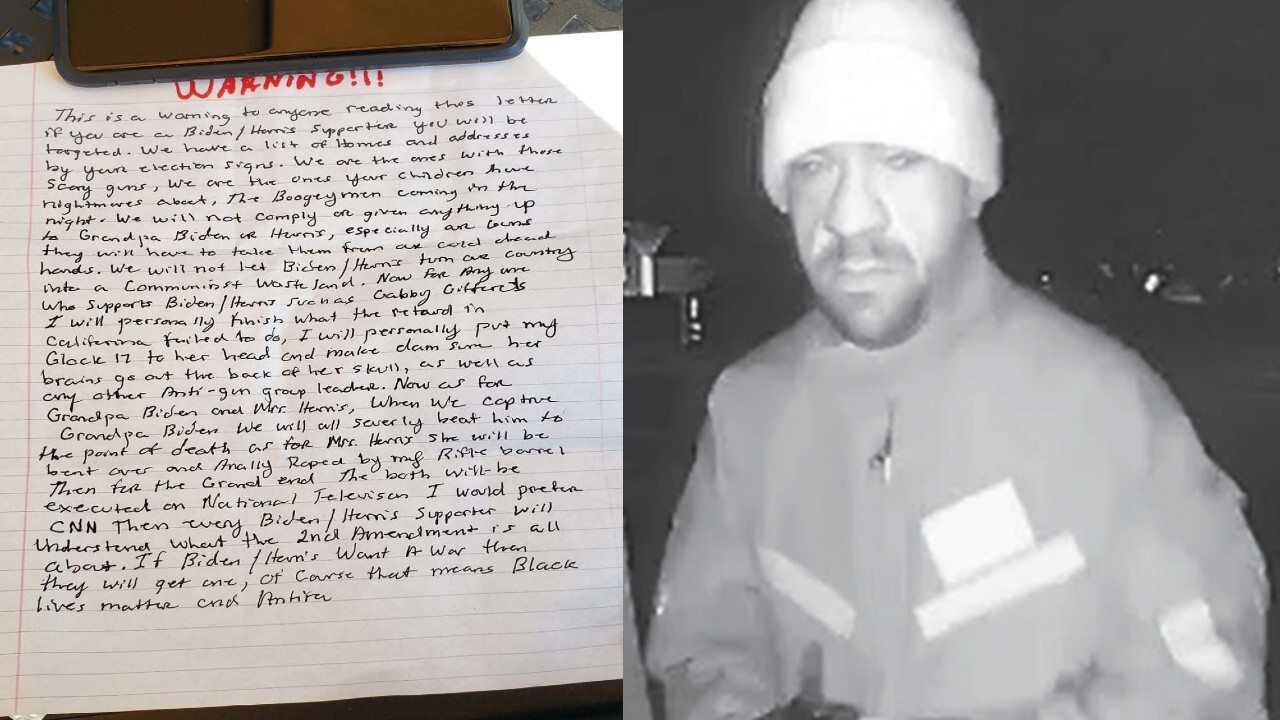 An affidavit filed in support of the complaint says a letter threatening the former vice president and current U.S. senator was left on the doorstep of a Frederick resident in the early morning hours on Oct. 4.

(Warning: It is graphic and disturbing)

“This is a warning to anyone reading this letter if you are a Biden/Harris supporter you will be targeted. We have a list of homes and addresses by your election signs. We are the ones with those scary guns, We are the ones your children have nightmares about…When We capture Grandpa Biden We will all severely beat him to the point of death as for Mrs. Harris she will be bent over and Anally raped by my rifle barrel. Then for the Grand end the [sic] both will be executed on National Television.”

A surveillance camera captured an image of the subject who delivered the letter, but the resident didn’t know the person. They did, however, have several yard signs supporting the Democratic candidates threatened in the letter, the affidavit says.

Investigators were alerted and began to search for the subject in the footage. After receiving a citizen tip, they focused their attention on Reed.

On Oct. 13, the Justice Department says Reed was interviewed at his home and denied leaving the threatening letter or being the person in the surveillance footage. Two days later though, authorities say Reed admitted to writing and delivering the letter. He was then arrested.

Reed is currently in state custody and a federal warrant has been lodged as a detainer to ensure his appearance in U.S. District Court at a future date. If convicted, he faces a maximum sentence of five years in federal prison.

U.S. Attorney for the District of Maryland Robert K. Hur issued this statement:

“We take these types of threats extremely seriously. Such threats to commit violence are illegal and have no place in our democracy, and we will hold accountable those who make them. We are grateful for the assistance of the City of Frederick Police Department and to citizens who provided tips that ultimately led to Mr. Reed’s arrest and these federal charges.”

“The right to vote and peacefully support the candidate of your choice are bedrocks of our democracy. Conduct like this that threatens major candidates and fellow citizens only undermines our democracy and the principles upon which America was founded. We will not tolerate threatening conduct that seeks to intimidate, harass or dissuade Americans from exercising their right to vote.”