Before the Buffalo Fire Department responded to a house explosion on Covington Road in North Buffalo, Thursday evening, Laurie Brown was there.

She was watching the news, and heard a huge boom. "I didn't stop to think about it," said Brown, "I just ran toward it, I was just afraid someone was inside."
It turns out someone was inside.  "There was fire all around him. The walls had blown apart and this older man is standing there, not a mark on him," said Brown.  "He just walked right through the burning debris toward us and then we just helped him across the street to a neighbor's house until the paramedics came." The man has since been identified by police as 73-year-old Santo Cok.
As the two neighboring homes burned, Brown says Cok spoke to her.  "He just said the last thing I remember is I lit a candle," said Brown.
Buffalo Police believe there was a specific reason Cok lit a candle.
"It appears this person intentionally wanted to blow the house up to commit suicide," said Buffalo Police Capt. Jeff Rinaldo during a news conference Thursday night.
Cok was not hurt, but he was taken to ECMC to be evaluated. He is now charged with arson, criminal mischief and reckless endangerment. Amazingly, no one else was hurt, and that's something even the police find hard to believe.
"It's kind of a miracle that nobody else was injured, said Cpt. Rinaldo. Our police officers did an amazing job getting in quickly responding, getting all the houses cleared out."
73-year-old Cok was arraigned on Friday on several charges, including Arson, Reckless Endangerment and Criminal Mischief.
Cok is currently being held without bail, pending a forensic examination.  He's due back in court on April 25. 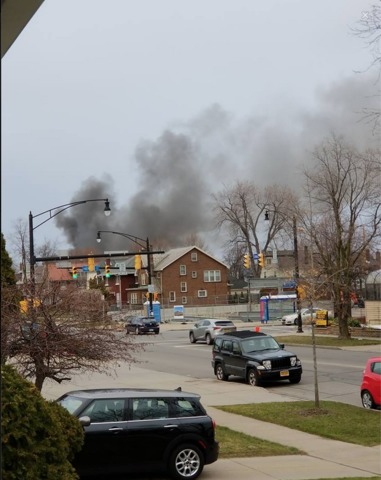