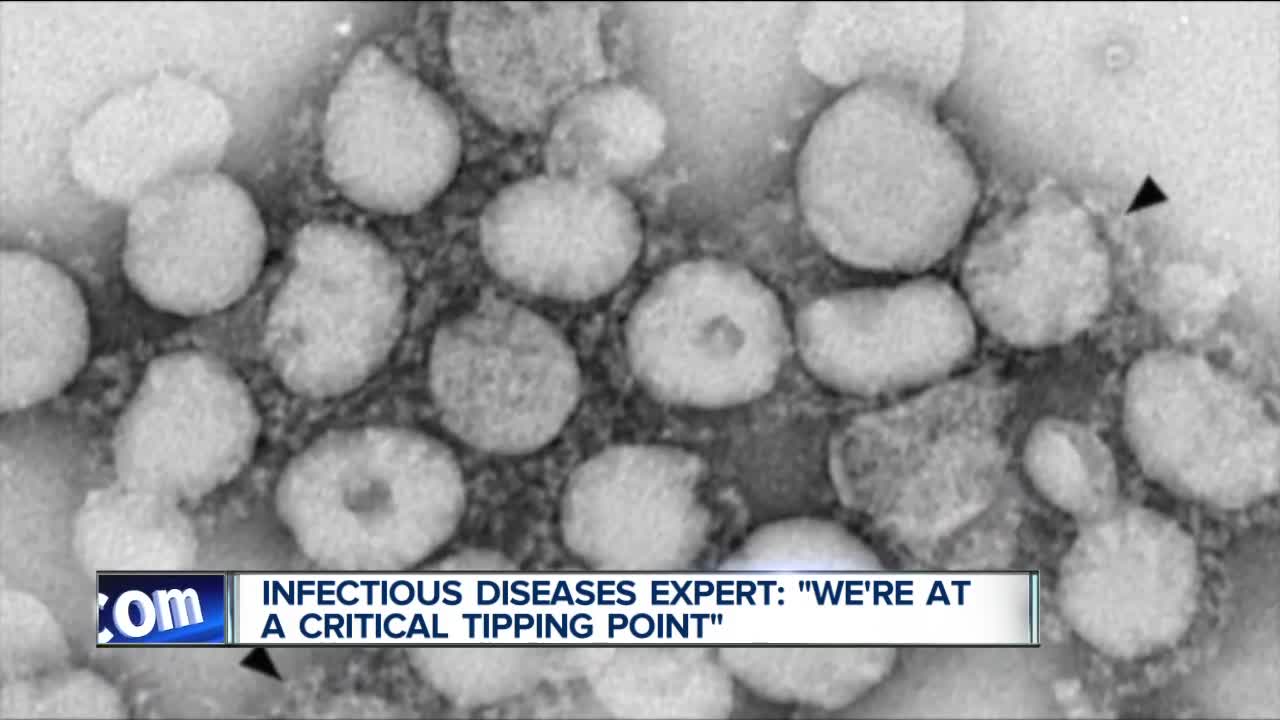 Western New York is thought to be “at a critical tipping point,” at least according to one local infectious diseases expert.

BUFFALO, N.Y. (WKBW) — Western New York is thought to be “at a critical tipping point,” at least according to one local infectious diseases expert.

Dr. Thomas Russo, Chief of the Division of Infectious Diseases in the Department of Medicine at the Jacobs School of Medicine and Biomedical Sciences at the University at Buffalo, says at this point, any person you may run in to could be infectious and that is why he says practicing social distancing is imperative to flatten the curve.

“Even with optimal testing, it's been estimated that detection of positive cases represents about 10% of the overall caseload,” Dr. Russo said. He continued, “I think it's quite certain that we probably have close to 2,000 plus cases.”

As for when peak may hit in Western New York, Dr. Russo believes it may differ from the rest of the state due to the far fewer number of cases and the timing of putting social distancing measures in place.

“It may be that the peak will be different for downstate than upstate…our time frame may be different than New York State overall,” he said.

Dr. Russo said it will be difficult to predict when things may go back to normal, but doesn’t see it happening by Easter. Looking at China as a case study, Dr. Russo explained how the country used “extreme social distancing” to help reduce the number of cases. That entire process, he said, took around three months. Here in the States, Dr. Russo said it really is just the beginning and predicts the country is “weeks away” from returning to normal.

“I'm thinking minimum of four to six weeks, unfortunately,” Dr. Russo said. He continued, “Maybe we'll get lucky. Maybe we'll catch a break. If there's some seasonality to this virus, which is still an unknown question. I think that it's less likely that'll be the case, but I'm hoping it is. So maybe the combination of the social distancing that we've been practicing…if we get lucky in the viruses, spreads less well in the warmer weather… that’ll speed up the time frame.”

Another point the Chief of the Division of Infectious Diseases brought up concerned Western New Yorkers who may work downstate.

“A lot of individuals from this Western New York region, were working in the downstate area, some of those individuals are coming home. It's critical that they quarantine themselves, separate themselves from other individuals so that we don't see a similar sort of bump that's been seen elsewhere,” Dr. Russo said.

“This is the moment for us to really, really work hard and try to flatten that curve and not go in the other direction and say, ‘Oh my gosh, I've been doing this for a week, two weeks, I'm bored. I'm going to go out.’ That is the danger and we really need to pull together on this one and try to write a different story for ourselves here in Western New York than what is happening downstate and elsewhere," Dr. Russo said.