Jim Kelly prepares to have surgery after oral cancer returned for a third time.

A representative for Mount Sinai tells us the surgery was successful and the cancer was removed. The rep also told us, Dr. Urken says Jim is doing well and should be in the hospital for about two weeks.

"We successfully removed Mr. Kelly's cancer from his upper jaw and lymph nodes from his neck. We then reconstructed his upper jaw. Mr. Kelly is resting comfortably post-operatively," said Dr. Mark Urken, Head and Neck Surgeon at Mount Sinai West, in a statement.

The Buffalo Bills Hall of Fame quarterback had to undergo a procedure to treat the cancer that returned earlier this month.

Jim's daughter, Erin Kelly, posted a photograph of her father on social media, which appears to be taken shortly before the procedure.  Jim Kelly is posing in a hospital bed and gown giving a 'thumbs up.' 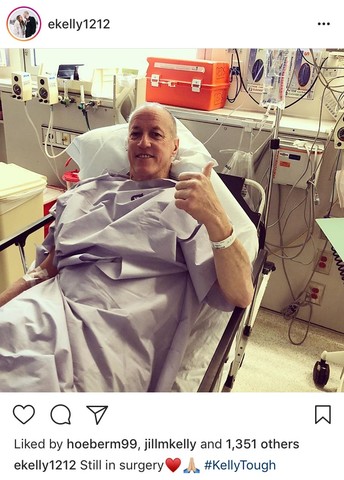 Earlier this week, Kelly sent out a message on Instagram to fans, thanking them for their support.

"I know I can't do this without the fans, especially those in Buffalo, especially you guys in Buffalo. You guys are the best. Me and my family, we know as we head out you have our back, and I know this is just the start of something great," Kelly said.

This is the third time Kelly has been diagnosed with oral cancer.

Kelly will have a follow-up screen in the three months.