2 detained in Kansas City after statue of Andrew Jackson vandalized 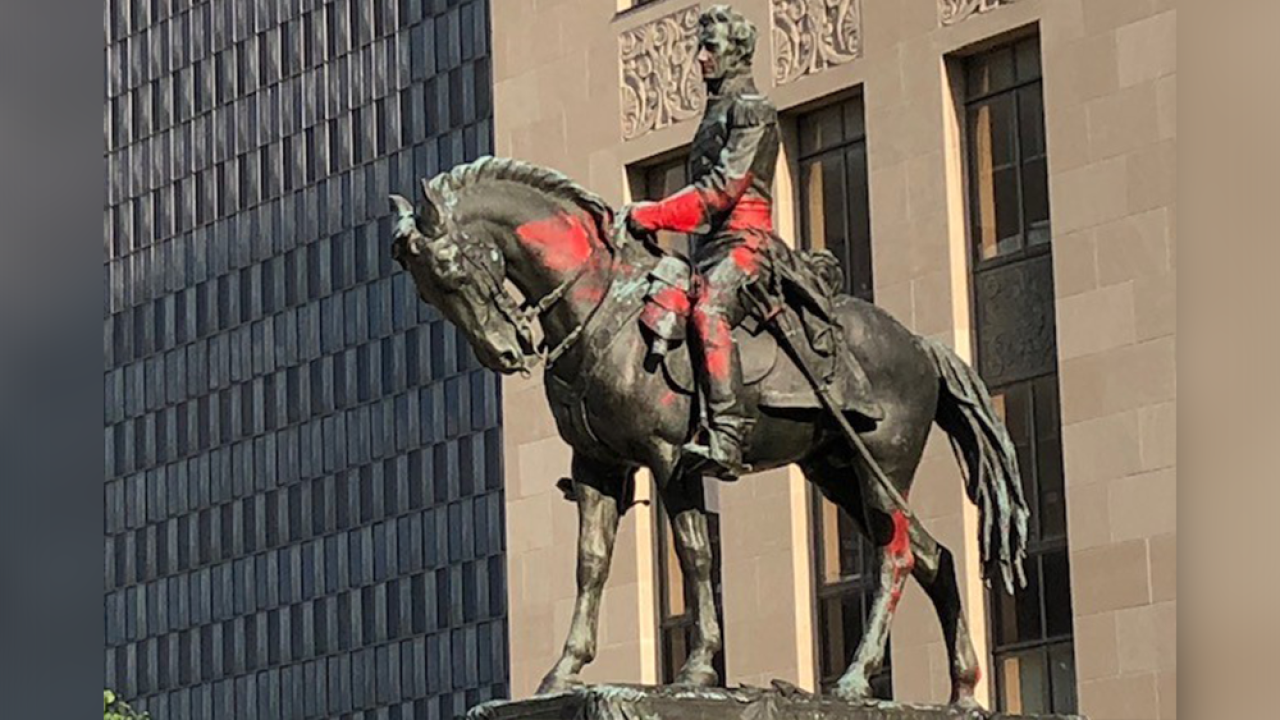 A protest group gathered outside the courthouse earlier in the afternoon before the statue was spray-painted with obscenities as well as the phrase "slave owner."

Kansas City Police Department (KCPD) officers were called to the courthouse shortly after 5:30 p.m. Thursday to investigate ongoing vandalism at the statue and observed two suspects spray painting the monument.

"Officers were able to identify the two individuals responsible from a distance," a KCPD spokesman said in a statement. "Once the crowd began to disperse and they were a safe distance away, the two suspects were taken into custody in front of Police HQ."

Police also called a KC Parks and Recreation crew to deal with the graffiti. The workers covered the statue with a tarp shortly before 9 p.m.

Unless officials can remove the graffiti, the statue will remain covered until the county legislature decide what to do with it. Jackson County Sheriff's Deputies will frequent the statue to prevent further damage.

After the incident, the protest had moved to Ilus W. Davis Park near East 10th Street and Locust Avenue.

"Both suspects are being detained tonight for further investigation and determination of applicable charges," a KCPD spokesman said.

Jackson — the seventh president of the U.S., who served from 1829 to 1837 — is among 12 former presidents who owned slaves before slavery was outlawed following the Civil War. Jackson became quite wealthy as a slave-owning plantation owner. His grave was defaced in 2018.

Jackson County Executive Frank White Jr. released a statement shortly after the vandalism, which called for the statue's removal.

"Countless men, women and children come through the doors of our courthouses every day," White's statement read, in part. "And every day, racism and discrimination are staring them in the face. Statues of Andrew Jackson — our country's seventh president and county's namesake — stand outside two of our courthouses, public buildings where we want and need people to feel welcome. Yet, they are greeted by a man who owned hundreds of slaves, opposed the abolitionist movement and caused thousands of Native Americans to die when he forced them out of their homeland for white settlement. As long as these statues remain, our words about fairness, justice and equality will continue to ring hollow for many we serve."

According to a release from White's office, he planned to "address the issue and recommend removal of the statues to the County Legislature" during the next meeting Monday morning.

The Jackson County Prosecutor's Office agreed to pay for plaques on both statues that detail Jackson's historical role in disenfranchising non-white people after the county legislature voted to add the plaques in December 2019. Due to the COVID-19 pandemic, the plaques have not yet been added to the statues.

White acknowledged that his stance on removing the statues might not be popular, but he believes it is necessary given the outpouring of cries for justice since a Minneapolis police officer drove a knee on George Floyd's neck as he laid facedown on the pavement until he died one month ago.

"In the month since George Floyd was tragically murdered, I have been inspired by the diversity of faces, voices, and ideas that have come forward and demanded we do better," White said. "What once could be described as a small minority pleading for change, has grown into a broad and diverse chorus of voices no longer pleading, but now demanding equality and making clear they will settle for nothing less. I am hopeful that we are seeing a true shift in the minds and hearts of people regardless of their age, race, gender or political affiliation. As we move forward, we must acknowledge the role that racism plays in our community and our responsibility to take action, which may sometimes be unpopular, to ensure everyone feels safe, feels welcome, and ultimately, is treated equally in Jackson County."

White said he would ask the Jackson County Legislature to form a special committee Monday and begin public hearings to discuss removing the statues.

He said Jackson County Prosecutor Jean Peters Baker, whose office agreed to pay for the plaques seven months ago, reached out recently to discuss removing the statues.

"I welcome the opportunity to work with the Legislature and fellow elected officials to find a better home for these statues where their history can be put into the appropriate context for us to learn from, but I am convinced that home is not in front of our courthouses," White said.

He concluded his statement by writing, "Let me be clear — we can never erase history. It is already written. But we don't need symbols to remind us of the decades of oppression endured by people of color when that is the very thing we are desperately trying to dismantle and heal from today. Like all great counties, this is an opportunity for us to change and evolve together, for the better."

This story was originally published by KSHB in Kansas City, Missouri.