The fate of the 'I Love NY' signs has been decided 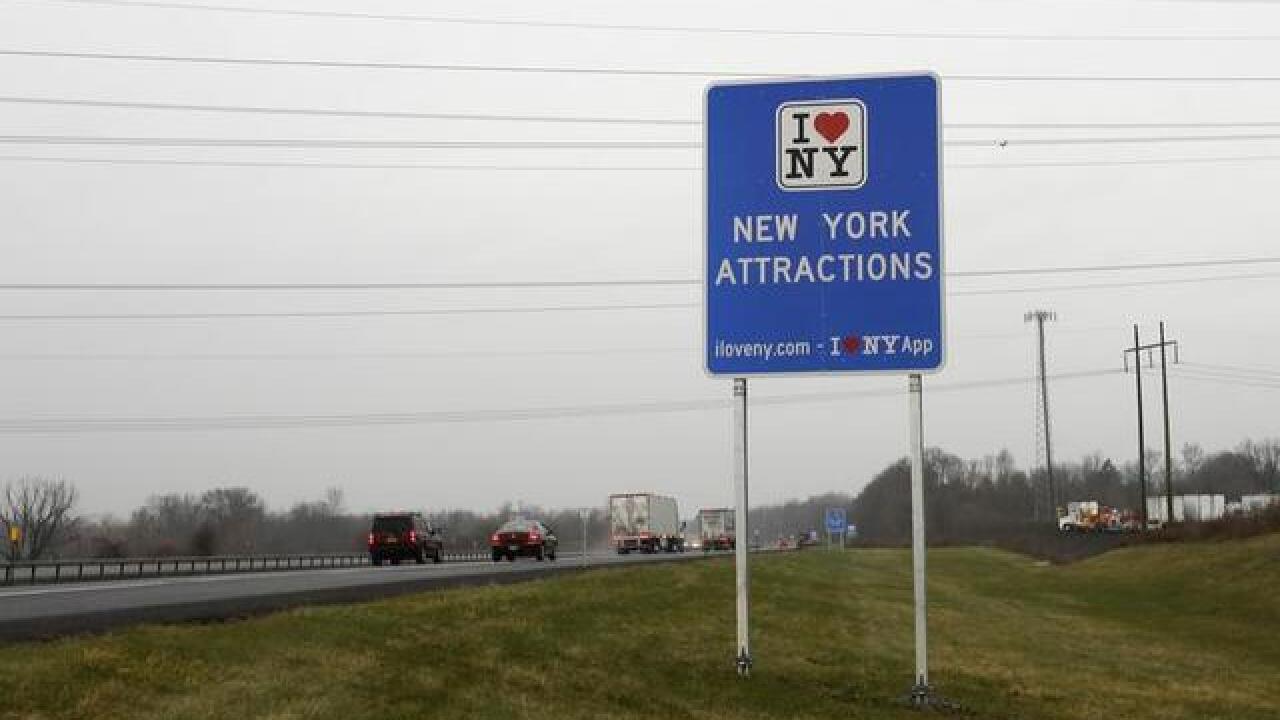 Copyright 2017 Scripps Media, Inc. All rights reserved. This material may not be published, broadcast, rewritten, or redistributed.
Mike Groll
<p>Vehicles pass an "I Love New York" sign on the New York State Thruway, Tuesday, Nov. 29, 2016, in Utica, N.Y. Officials with the Federal Highway Administration and the New York Department of Transportation will meet in December to discuss the removal of more than 500 “I Love NY” signs from the state’s roadways. FHA officials say the signs don’t conform to federal standards and pose a dangerous distraction for motorists. (AP Photo/Mike Groll)</p>

New York State and the federal government have reached an agreement on the "I Love New York" signs that the feds have called illegal.

The agreement, announced Friday, means New York will not lose out on $14 million in federal highway funding.

7 Eyewitness News reached out to the Thruway Authority for comment and a spokesperson stressed the most important details coming out of this agreement are that the Thruway Authority and DOT will not lose any funding and the signs will still be in place past Sunday, the original deadline for them to be removed.

The full statement from NYS Department of Transportation Commissioner Paul Karas and NYS Thruway Authority Director Matthew Driscoll can be read below:

“The New York State Department of Transportation and the Thruway Authority have been working with the Federal Department of Transportation and the Federal Highway Administration on New York’s road signage tourism campaign.  The campaign has been in place for approximately five years and has been highly successful.  The Federal Highway Administration regulates signage on Federal Highways.  We are pleased that our Federal partners understand our efforts to make this state more attractive and accessible to the traveling public and that they will work with the state to review our efforts and evaluate the impact on the traveling public.

“Accordingly, we have reached an agreement to launch an innovative experimental project to allow tourism signage to highlight cultural, historic, and other significant state attractions off the highway system. This is a win-win for all parties and we thank our federal counterparts for their cooperation. We will submit a final plan on this new project in the coming months.

“As the “I Love New York,” “Taste of New York,” “Pathways Through History,” signage  campaigns have run for approximately 5 years, the state will be designing a new advertisement campaign which will be profiled in various media outlets, as well as, easy to download apps that will coordinate with road signage.  Regional introductory signs -- referred to as motherboards -- and follow up specific attraction signs will be part of the effort.

“The state’s tourism effort has been a tremendous economic success and has driven tourism to record highs and is now an over $100 billion industry providing approximately 1 million jobs.  We will coordinate with our Federal counterparts once we have more details on this new effort and we will announce the campaign as soon as it is completed. This agreement resolves the preexisting matter between the state and the federal government and the state will continue to receive all federal highway aid.”