This map shows the richest person in every state 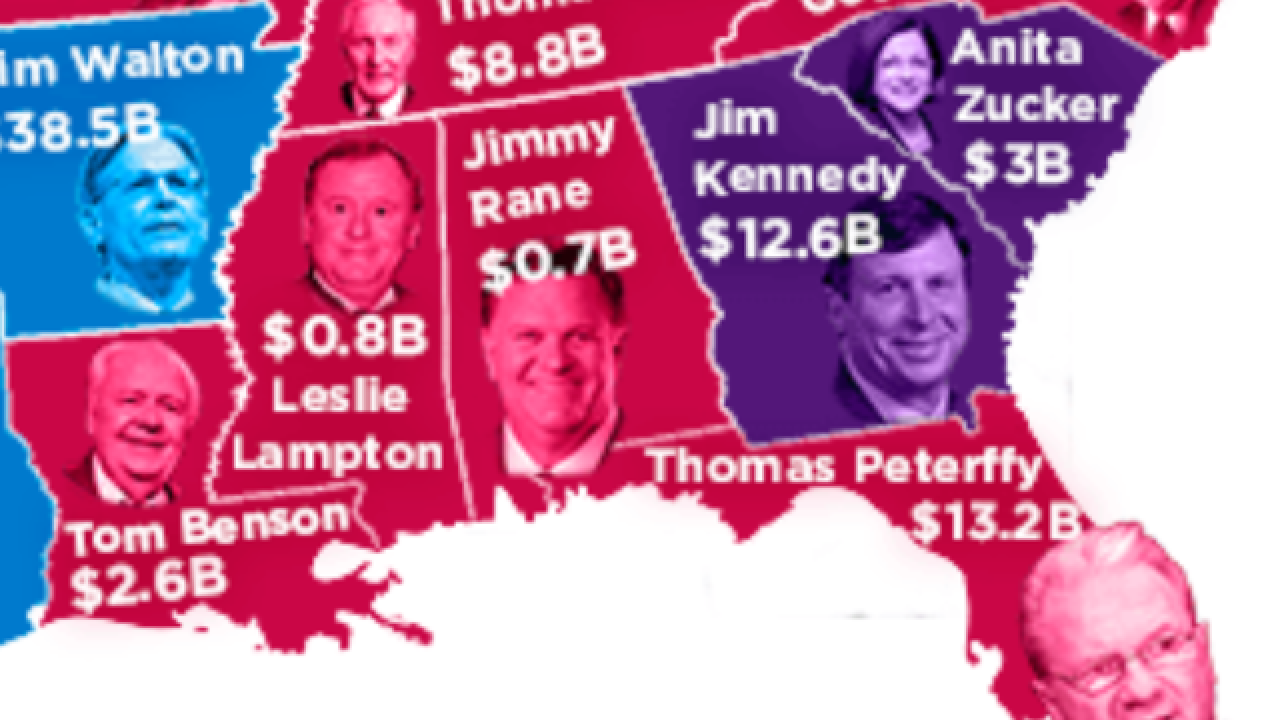 When it comes to naming the richest people in the country, most people can manage a few names. You can probably come up with a few folks whose savings stand out, including Bill Gates, Oprah and Mark Zuckerberg. But could you name the richest person in each state? That's exactly what one recently created map does, and it's a wealth of information. Using data from Forbes, HowMuch.net recently created an infographic mapping out the richest person in each state, and it's a fairly revealing document. Keep in mind: This is a snapshot in time, as people's net worth changes constantly. Since much of their worth is tied up in stocks, and stock values fluctuate all day long, their net worth changes just as much. A few things we learned? The majority of the richest people in the country are actually self-made, having earned their fortunes through hustle and hard work. Interestingly, the West also has a higher concentration of wealth than the East coast does, and there are far more men on the list than there are women. The country is also home to the two richest people in the world: Bill Gates and Warren Buffett. So, let's dive in, shall we?

Last year, Alabama resident Jimmy Rane became the richest man in his home state. He's the founder of Great Southern Wood Preserving, one of the largest treated lumber companies in the world, and has a net worth of $.7 billion. He's put that money to good use, as well: he's focused on bringing new life to his hometown of Abbeville, where he grew up and still lives today.

Alaska's tied! Both Jonathan Rubini and Leonard Hyde have a net work of $0.3 billion each—which makes sense, considering the two are business partners who run a successful real estate business out of Anchorage.

Bruce Halle has made a cool $6 billion with his tire company, Discount Tire.

The founder of Wal-Mart, Sam Walton, left a few wealthy children behind. Among them is Jim Walton, the richest man in Arkansas, who now has a net worth of $34.9 billion and his own company—Arvest Bank Group—to his name.

California's richest man is none other than one of the biggest names in technology today: Mark Zuckerberg, the founder of Facebook, with a net worth of $62.4 billion.

Charles Ergen, c0-founder and chairman of satellite TV provider Dish, has a net worth of $18.8 billion. Originally from Tennessee, he now calls Denver home.

Ray Dalio, the founder of the world's largest hedge fund, has a net worth of $16.8 billion and has made a name for himself as Connecticut's most generous donor over the last 15 years.

Brother-sister duo Elizabeth Snyder and Robert Gore are tied for the position of richest resident in Delaware. Each has a net worth of $0.7 billion, largely thanks to their parents, who founded the company that created Gore-Tex.

The founder and CEO of Interactive Brokers Group, Thomas Peterffy, has $13.2 billion to his name.

Media giant Jim Kennedy is chairman of the family-owned Cox Enterprises, an automotive and media company based in Atlanta.

The founder of eBay, Pierre Omidyar, was born in France—but he now lives in Hawaii with his family and owns resort properties in Mexico and California. In the past few years, he's been giving his eBay shares away to his philanthropic firm, but he still has an impressive net worth of $8.9 billion.

Idaho Falls resident Frank VanderSloot is the founder and CEO of Melaleuca, an online wellness-focused retail company. His business model has earned him a net worth of nearly $2 billion.

With a stunning net worth of $8 billion, Ken Griffin easily ranks as the wealthiest person in Illinois. He started trading stocks while in university, but he truly started building his empire when he founded Citadel, a global hedge fund.

After his father died, Indiana resident Carl Cook took over his parents' medical device business, the Cook Group, in 2011. It's made him a veritable fortune: according to Forbes, his net worth is $8 billion.

Charles Koch, the CEO of the family-owned multinational corporation Koch Industries, has one of the highest net worths in the United States, with $47.5 billion to his name.

If you've ever looked for self storage options, you've probably come across Public Storage, the storage business that earned founder B. Wayne Hughes a net worth of nearly $3 billion.

Businessman Tom Benson's love of sports have made him and his family some of the wealthiest people in Louisiana. Benson owns both the New Orleans Saints and the New Orleans Pelicans, as well as several buildings in New Orleans, and has a net worth of $2.6 billion.

Susan Alfond has a net worth of $1.4 billion, largely due to the success of her father's highly lucrative shoe company, the Dexter Shoe Company.

In 1952, Ted Lerner borrowed $250 from his wife to start his own real estate company—and he now owns over 20 million square feet of retail and commercial property (not to mention the Washington Nationals baseball team).

Abigail Johnson is CEO and chairman of Fidelity, a mutual fund firm originally founded by her grandfather. The Massachusetts resident has a reported net worth of $14.9 billion, according to Forbes.

Franklin resident Daniel Gilbert has a lot going on: not only is he the founder of a handful of companies (including Quicken Loans, JACK Entertainment and Rock Ventures), but he's a majority owner of the Cleveland Cavaliers.

Whitney Macmillan is the former CEO of Cargill, a privately held global corporation. While he was the last Macmillan to serve as CEO of the company, the Cargills and Macmillans still own around 90 percent of the corporation.

Mississippi's Leslie Lampton earned his $0.8 billion after founding Ergon, a refining and chemicals conglomerate, in the 1950s.

Columbia resident Stanley Kroenke owns several sports teams and millions of square feet of real estate. He has a net worth of $7.5 billion and is married to one of the heiresses of the WalMart empire, Ann Walton Kroenke (talk about a power couple).

Billionaire Dennis Washington owns a diverse number of companies that tackle everything from transportation to mining.

Now here's a name you'll probably recognize. Nebraska is home to the world's second wealthiest man, investor Warren Buffett, who has a net worth of $76.2 billion.

Sheldon Adelson is both the chairman and CEO of the United States' largest casino company, Las Vegas Sands. Is it any wonder that he has a net worth of $35.6 billion?

Andrea Reimann-Ciardelli's shares in her family's company, JAB Holding Company, have made Reimann-Ciardelli a billionaire. While originally from Germany, she now lives in Hanover, New Hampshire.

Donald Newhouse and his brother inherited their father's company, Advance Publications, in the 1970s. The media company deals with everything from broadcast to publishing, and the business has left Newhouse with a net worth of $12 billion.

Mack C. Chase founded his own oil and gas company, Mack Energy Corporation, in 1988, and he's remained in the industry ever since.

If you don't recognize his picture, you'll at least recognize his last name. Michael Bloomberg, former New York mayor and cofounder of Bloomberg LP (a global information company), is currently New York's richest man with a net worth of $50.7 billion.

North Carolina's James Goodnight has earned his fortune as the co-founder and CEO of SAS, one of the world's largest vendors of business analytics software.

Gary Tharaldson has a net worth of $0.9 billion, a fortune that he's acquired by building hotels across the country.

You may not have heard of Les Wexner's retail network, L Brands, but you certainly know some of the companies it's comprised of (including Victoria's Secret and Bath & Body Works). As CEO of L Brands, Wexner has accumulated a net worth of $6.2 billion.

As founder, chairman and CEO of the oil production company Continental Resources, Harold Hamm has racked up over $10 billion.

Phil Knight founded Nike in 1964, and he's been making bank ever since. Knight and his family have a net worth of at least $25.1 billion, according to Forbes.

Pennsylvania's wealthiest resident, Mary Alice Dorrance Malone, is worth $3.8 billion. She can thank her grandfather, the founder of Campbell's Soup Co., for the inheritance.

Jonathan Nelson is the CEO of Providence Equity Partners and is worth a cool $2 billion.

Anita Zucker's late husband founded InterTech, a lucrative chemical manufacturing company, in 1982. Ever since his death in 2008, Zucker has been running the company as CEO.

Worth over $2 billion, First Premier Bank CEO and philanthropist T. Denny Sanford has reportedly said he wants to die broke. He uses his position as South Dakota's richest resident to send checks directly to worthy foundations.

Thomas Frist Jr. and his family are worth nearly $9 billion, thanks to their healthcare service business, Hospital Corp of America, which runs hundreds of hospitals and surgical centers across the country.

When it comes to sorting the richest people in the United States, Alice Walton ranks pretty high. She's the daughter of Walmart founder Sam Walton and has a net worth of $38.2 billion.

Gail Miller, owner and chairman of the Larry H. Miller Group of Companies, grew her company from a single car dealership in 1979 to include over 80 separate businesses today.

John Abele, owner of the medical device company Boston Scientific, is worth $0.6 billion and ranks as Vermont's richest resident.

Jacqueline Mars, worth $27.6 billion, is the United States' third richest woman. Mars owns a third of the Mars candy company, which her grandfather founded over a century ago.

Jim Justice II might be the current governor of West Virginia, but he earned his fortune as a coal mining businessman. He's currently the richest man in the state, with a net worth of $1.6 billion.

John Menard Jr. is the president and CEO of Menards, a hardware store chain. His net worth currently sits at around $10.9 billion.

Jacqueline Mars isn't the only candy tycoon to make the list of richest Americans. Just like his sister, John Mars owns a third of his grandfather's candy empire and has a net worth of $27.6 billion. Of course, these are just the richest people in the United States for 2017. Keep your eye open for next year's infographic, since these lists tend to get shaken up a bit from year to year.